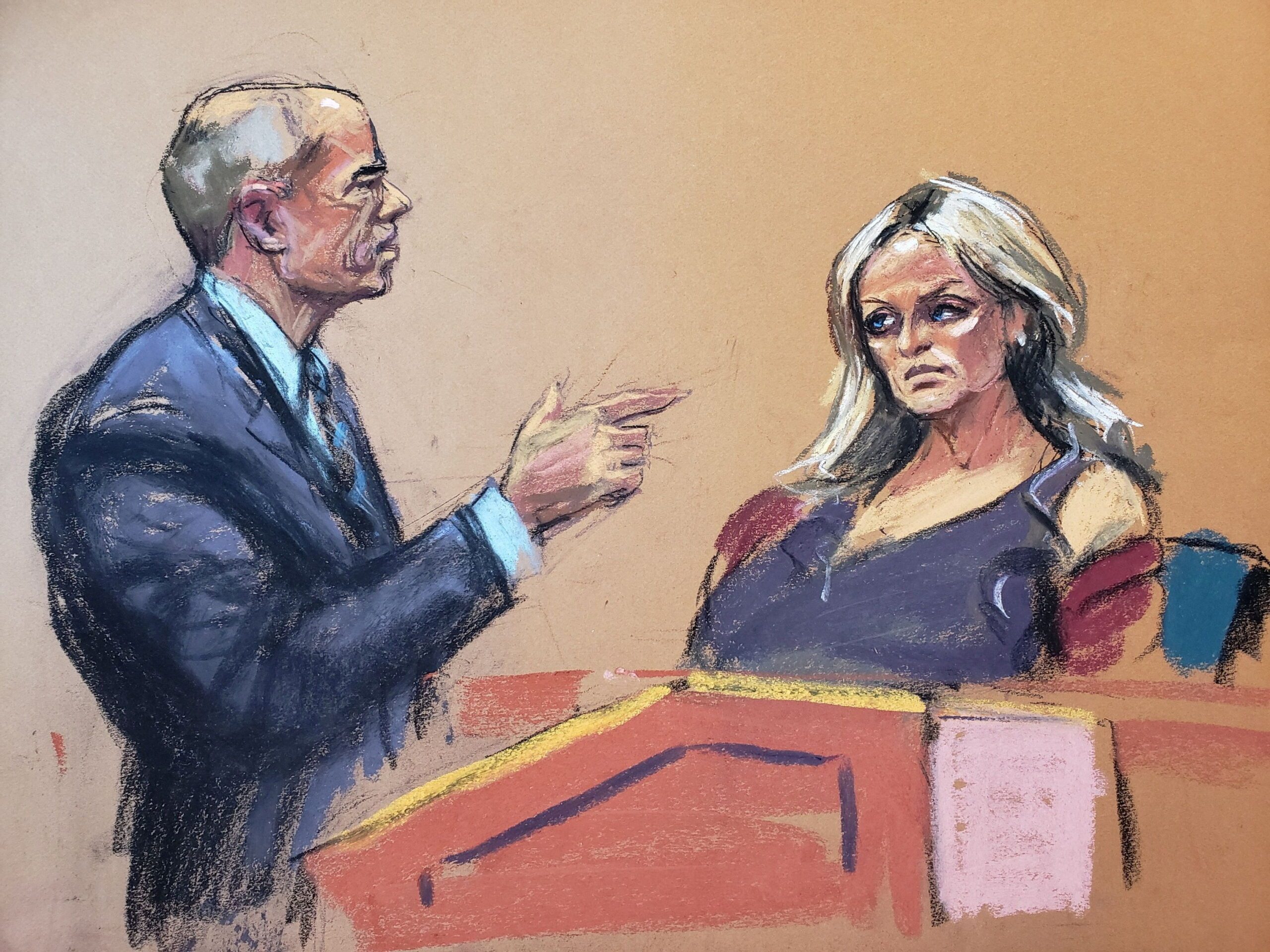 ON THE STAND. Former attorney Michael Avenatti, representing himself, cross-examines witness Stormy Daniels during his criminal trial at the United States Courthouse in the Manhattan borough of New York City, US, on January 27, 2022, in this courtroom sketch.

Facebook Twitter Copy URL
Copied
Avenatti's work for Daniels, whose real name is Stephanie Clifford, helped propel him to fame in 2018, before a slew of criminal charges the following year ended his law practice

NEW YORK, USA – Adult film actress Stormy Daniels told jurors at her former lawyer Michael Avenatti’s criminal fraud trial on Thursday, January 27, that he “stole from me and lied to me” by diverting proceeds from a book she wrote.

Testifying as a prosecution witness, Daniels said in Manhattan federal court that Avenatti – whom she had retained to help her escape a non-disclosure agreement with then-US President Donald Trump – told her he would “never take a penny” from the 2018 memoir, titled Full Disclosure.

But Avenatti embezzled nearly $300,000 of proceeds intended for Daniels, prosecutors have said, in part by forging her signature on instructions to the publisher about where to send the funds. Daniels, 42, said Avenatti never told her about the account.

“I felt very betrayed and stupid,” Daniels said. “Michael had been lying and stealing from me.”

Avenatti, 50, has pleaded not guilty to wire fraud and identity theft. He has portrayed the dispute as a disagreement over legal fees that has no place in criminal court.

Avenatti’s work for Daniels, whose real name is Stephanie Clifford, helped propel him to fame in 2018, before a slew of criminal charges the following year ended his law practice.

Daniels is known for receiving $130,000 of hush money from Trump’s former personal lawyer, Michael Cohen, to keep quiet before the 2016 presidential election about a sexual liaison she claimed to have once had with Trump, which Trump denies.

Avenatti, a brash lawyer who is representing himself, cross-examined Daniels for about 10 minutes on Thursday before the jury was dismissed for the day. Cross-examination was expected to resume on Friday, January 28.

Daniels described herself as a writer, director and actress now producing a television show that investigates paranormal activity titled “Spooky Babes.” She wore a maroon cardigan sweater over a black dress.

Avenatti briefly asked Daniels about her claims she “has the ability to see and speak to dead people” on Thursday. He is expected to use Daniels’ interest in ghosts to portray her testimony as unreliable.

“You’ve also claimed that you have the ability to speak to a haunted doll named Susan?” Avenatti said.

“Susan speaks to everyone on the show. She’s a character on ‘Spooky Babes,'” Daniels replied. “She has her own Instagram.”

‘He lied to me almost every day’

Prosecutors displayed dozens of text messages between Avenatti and Daniels after a third advance payment under her book contract was due in October 2018.

In response to messages asking why she had not received the money, Avenatti said he would send the publishing company a letter demanding that it pay Daniels.

In February 2019, after Daniels learned the company had paid Avenatti, she sent him a screenshot of the payment records, the documents showed.

“They had sent my payment on time, no question, and he lied to me almost every day for five months,” she testified.

Avenatti was hit with dozens of criminal charges in March and April 2019 for allegedly cheating Daniels, defrauding several other clients and trying to extort up to $25 million from Nike Inc, among other charges.

He is appealing his conviction and 2-1/2-year prison sentence in the Nike case. A trial over the other alleged client frauds, in which Avenatti also represented himself, ended in a mistrial. The remaining charges have yet to be tried. – Rappler.com