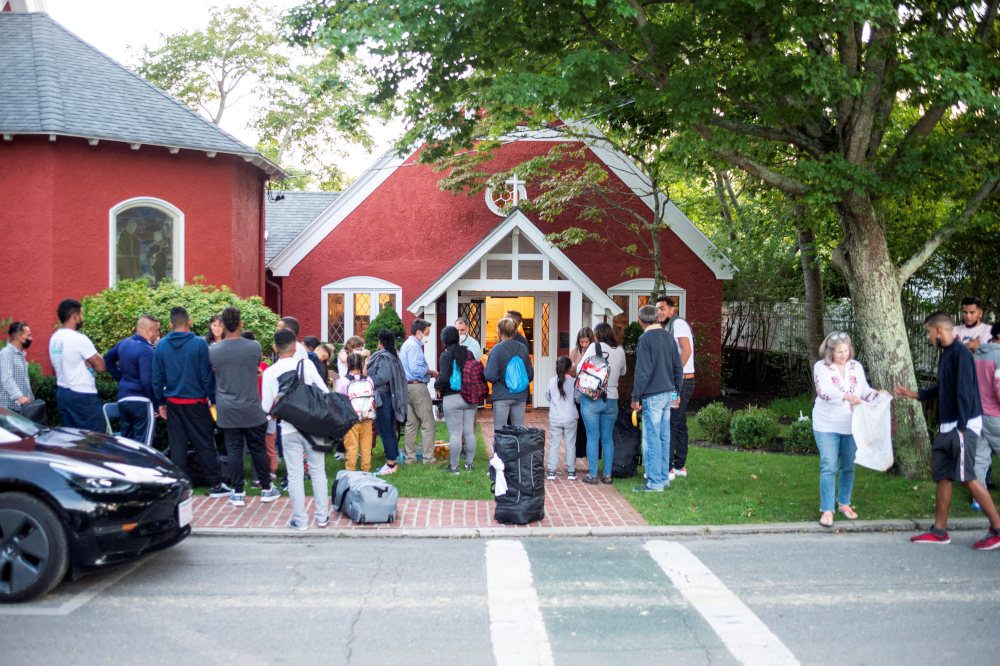 Facebook Twitter Copy URL
Copied
'It's wrong from a human rights perspective. What was done to these folks was wrong,' Bexar County Sheriff Javier Salazar says

A Texas county sheriff is opening a criminal investigation into flights that carried dozens of migrants to Martha’s Vineyard, Massachusetts, from Texas last week, an act that Florida’s Republican governor took credit for and which the White House dubbed a political stunt.

Bexar County Sheriff Javier Salazar said at a news conference on Monday, September 19, that around 50 migrants were “lured under false pretenses” on the streets of San Antonio, put up in a hotel, bused to planes and “stranded unceremoniously in Martha’s Vineyard,” a wealthy vacation island, “for nothing other than a photo op.”

San Antonio is the biggest city in Bexar County.

“What infuriates me most about this case is that we have 48 people who are already on hard times,” Salazar said. “I believe they were preyed upon.”

Salazar, a Democrat, said his move was not related to his party affiliation. “It’s wrong from a human rights perspective. What was done to these folks was wrong.”

A spokesperson for Florida Governor Ron DeSantis said immigrants have been “more than willing to leave Bexar County after being abandoned.”

“Florida gave them an opportunity to seek greener pastures in a sanctuary jurisdiction that offered greater resources for them, as we expected,” DeSantis’ communications director, Taryn Fenske, said in an emailed statement.

Salazar said his office was working with advocacy organizations and private attorneys representing the victims and could coordinate with federal authorities as needed.

DeSantis, who is up for re-election in November and seen as a possible presidential contender in 2024, claimed credit for the two flights from San Antonio, while criticizing Democratic President Joe Biden’s handling of a record number of crossings along the US-Mexico border.

DeSantis joins Republican governors from Texas and Arizona in sending migrants to Democratic-controlled cities, including buses of migrants from Texas dropped off near the residence of Vice President Kamala Harris in Washington.

DeSantis said last week that Florida paid to fly the migrants to Martha’s Vineyard because many migrants who arrive in Florida come from Texas.

Republicans have been trying to shift responsibility for border crossers to Democratic leaders. The Biden administration said the Republicans are using migrants as “political pawns.”

While details of how the flights were arranged and paid for remain unclear, one migrant told Reuters he and his family were recruited outside of a migrant resource center in San Antonio and promised housing, support for 90 days, help with work permits and English lessons. He said they were surprised when their flight landed on an island best known as a summer retreat populated mostly by affluent, liberal Americans.

US border agents made nearly 2 million migrant arrests through August at the US-Mexico border this fiscal year, which began last October, according to government data released Monday. They include a growing number of Cubans, Nicaraguans, Venezuelans and others who cannot be expelled to Mexico under a public health order in place since the beginning of the COVID-19 pandemic. Many seek to pursue asylum claims. – Rappler.com