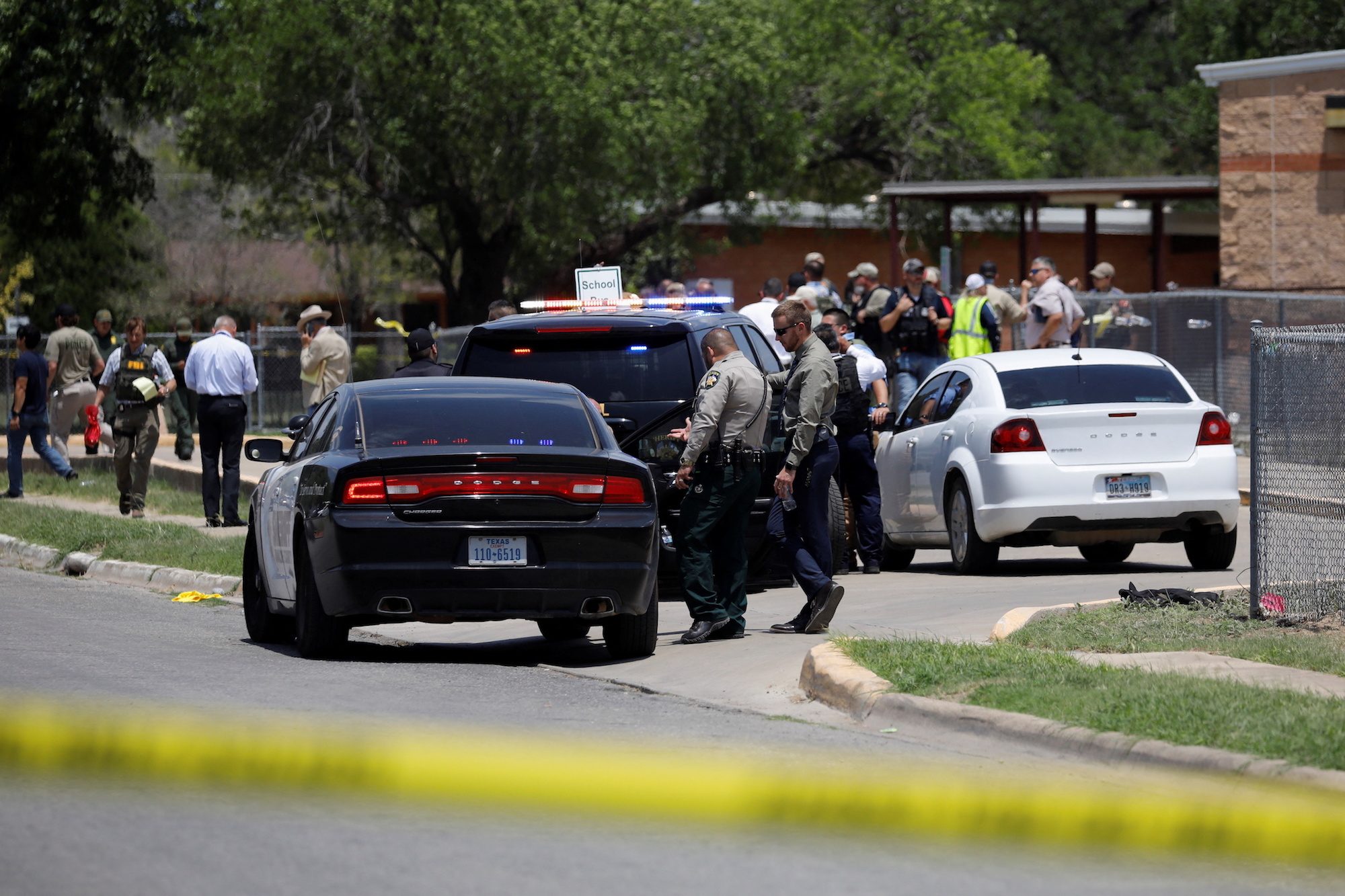 SCHOOL SHOOTING. Law enforcement officers guard the scene of a shooting at Robb Elementary School in Uvalde, Texas, US, May 24, 2022.

TEXAS, USA, – The gunman in the Texas elementary school massacre barged unchallenged through an unlocked door, then killed 19 children and two teachers while holed up in their classroom for an hour before a tactical team stormed in and killed him, police said on Thursday, May 26.

The latest official details from the Texas Department of Public Safety (DPS) on Tuesday’s mass shooting differed from initial police accounts and raised questions about security measures at the school and the response of law enforcement.

The school district in Uvalde, Texas, about 80 miles (130 km) west of San Antonio, has a standing policy of locking all entrances, including classroom doors, as a safety precaution.

The newly detailed chronology came hours after videos emerged showing desperate parents outside Robb Elementary School during the attack. They pleaded with officers to storm the building, and some fathers had to be restrained.

At a briefing for reporters, DPS spokesperson Victor Escalon said the gunman, Salvador Ramos, 18, made his way unimpeded on to the school grounds after crashing his pickup truck nearby. The carnage began 12 minutes later.

Preliminary police reports had said that Ramos, who drove to the school from his home after shooting and wounding his grandmother there, was confronted by a school-based police officer as he ran toward the school.

Instead, no armed officer was present when Ramos arrived at the school, Escalon said. He said the majority of the killer’s gunfire came in the early moments of the rampage, which ranks as the deadliest U.S. school shooting in nearly a decade.

The suspect crashed his pickup truck outside the school at 11:28 am (1628 GMT), opened fire on two people at a funeral home across the street and walked into the school through a rear door that investigators believe was left unlocked at 11:40 am (1640 GMT), Escalon said.

The shooter then barricaded himself inside the fourth-grade classroom of his victims, mostly 9- and 10-year-olds, for an hour before a U.S. Border Patrol tactical team breached the room and fatally shot him, Escalon said. Officers reported hearing at least 25 gunshots coming from inside the classroom early in the siege, he said.

The hour-long interval appeared to be at odds with an approach adopted by many law enforcement agencies to confront “active shooters” at schools immediately to stop any further bloodshed.

Asked if police should have made en masse entry sooner, Escalon answered, “That’s a tough question,” adding that authorities would offer more information as the investigation proceeded.

He described a chaotic scene after the initial exchange of gunfire, with officers calling for backup and evacuating students and staff.

In one video posted on Facebook by a man named Angel Ledezma, parents can be seen breaking through yellow police tape and yelling at officers to go into the building.

“It’s already been an hour, and they still can’t get all the kids out,” Ledezma said in the video. He did not immediately respond to a request for comment.

Another video posted on YouTube showed officers restraining at least one adult. One woman can be heard saying, “Why let the children die? There’s shooting in there.”

“We got guys going in to get kids,” one officer is heard telling the crowd. “They’re working.”

‘No idea this was goodbye’

Investigators were still seeking a motive, Escalon said. Ramos, a high school dropout, had no criminal record and no history of mental illness. Minutes before the attack, however, he had written an online message saying he was about to “shoot up an elementary school,” according to Governor Greg Abbott.

“I just want the people to know I’m sorry, man, [for] what my son did,” he was quoted as saying. “He should’ve just killed me, you know, instead of doing something like that to someone.”

In one of the more chilling accounts of the shooting, a fourth-grade boy who was in the classroom told local TV station KENS5 that the gunman announced his presence when he entered by crouching slightly and saying, “It’s time to die.”

Why a rear door to the school building would be left unsecured remained under investigation, Escalon said.

Miguel Cerrillo, 35, and his 8-year-old daughter, Elena, a third-grader at Robb, said the door the shooter used was usually locked.

“But that day they were not locked because it was awards day, and some parents were coming in through those doors,” said Elena, who was in the school at the time of the shooting. “The parking was really packed in front so people were parking back there and using that door.”

At least 17 people, including children, were also injured in the massacre.

Uvalde County, one of the poorer in Texas, has four police personnel – a chief, a detective and two officers – to patrol nine schools in its district, with some “secondary” campuses assigned a security guard, according to the school district website.

Teachers undergo annual security training, and students are instructed in lockdowns, evacuations and other safety procedures, it said. Robb Elementary is enclosed within a perimeter fence.

The attack, coming 10 days after 10 people were killed by an 18-year-old gunman in a supermarket in Buffalo, New York, has reignited a national debate over firearms. US President Joe Biden and fellow Democrats have vowed to push for new gun restrictions, despite resistance from Republicans.

Biden is due to travel Uvalde on Sunday, May 29. – Rappler.com