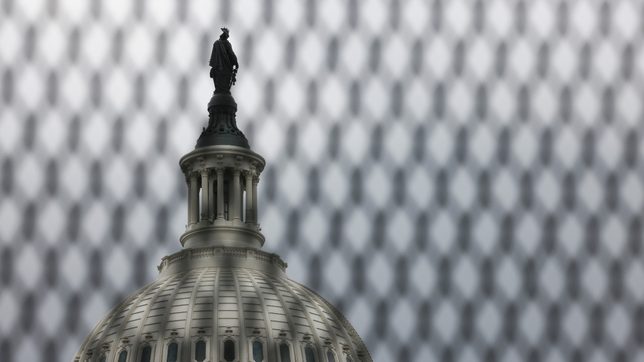 CHARGED. The US Capitol building is seen behind security fencing that has been up around the building since shortly after the January 6, 2021 siege, on Capitol Hill in Washington, May 28, 2021.

US prosecutors have obtained a conspiracy indictment against six California men associated with the Three Percenters right-wing militia, the latest in a series of such charges arising from the January 6 riot by former President Donald Trump’s supporters.

The indictment against the men was returned by a grand jury in the District of Columbia on Wednesday, June 9, and made public on Thursday, June 10. They face charges including conspiring to obstruct an official proceeding, which carries a 20-year maximum sentence.

The Justice Department said in a news release that four of the six men “identify as members of Three Percenter militias,” but that all of them chatted on the app Telegram to coordinate their actions on January 6.

Two of the six men, Alan Hostetter and Russell Taylor, were seen a day before the riot with Roger Stone, a friend and adviser to Trump, during a protest outside the US Supreme Court against the outcome of the 2020 presidential election.

About 30 people – including members of two other right-wing groups, The Oath Keepers and The Proud Boys – have been accused of conspiracy, the most serious charges related to the riot. Those pending cases are the largest and most complex of the roughly 500 brought by the Justice Department since the attack.

The other men charged in the indictment were Erik Scott Warner, Felipe Antonio “Tony” Martinez, Derek Kinnison and Ronald Mele.

Founded in 2008, the Three Percenters is a loosely organized anti-government group that takes its name from the idea that only 3% of American colonists took up arms against the British in the 18th century American Revolution.

In victory for Trump, Republicans block probe of US Capitol riot 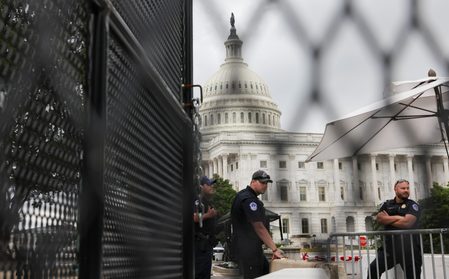 Beginning in December 2020, the six men hatched a plan using the encrypted messaging app Telegram to bring weapons to Washington and storm the Capitol, according to the indictment. Prosecutors said the men selected January 6 because of a December 19 Trump Twitter post stating: “Big protest in D.C. on January 6th. Be there, will be wild!”

Prosecutors said that on December 29, Taylor told his accused coconspirators on Telegram: “I personally want to be on the front steps and be one of the first ones to breach the doors!”

The pro-Trump mob stormed the Capitol, interrupted the formal congressional certification of Democrat Joe Biden’s election victory, clashed with an overwhelmed police force, and invaded the House of Representatives and Senate chambers. The violence left five dead, including a police officer.

Trump granted a pardon to Stone in December, wiping away his conviction arising from a federal investigation that documented Russian interference in the 2016 US election. Stone did not immediately respond to a request for comment.

Four of the six men charged in the indictment — Warner, Martinez, Kinnison and Mele – traveled to Washington in a rented SUV, according to the court document.

Kinnison said in the Telegram group that they were driving rather than flying because they were bringing equipment including “multiple cans of bear spray” and “knives.” – Rappler.com