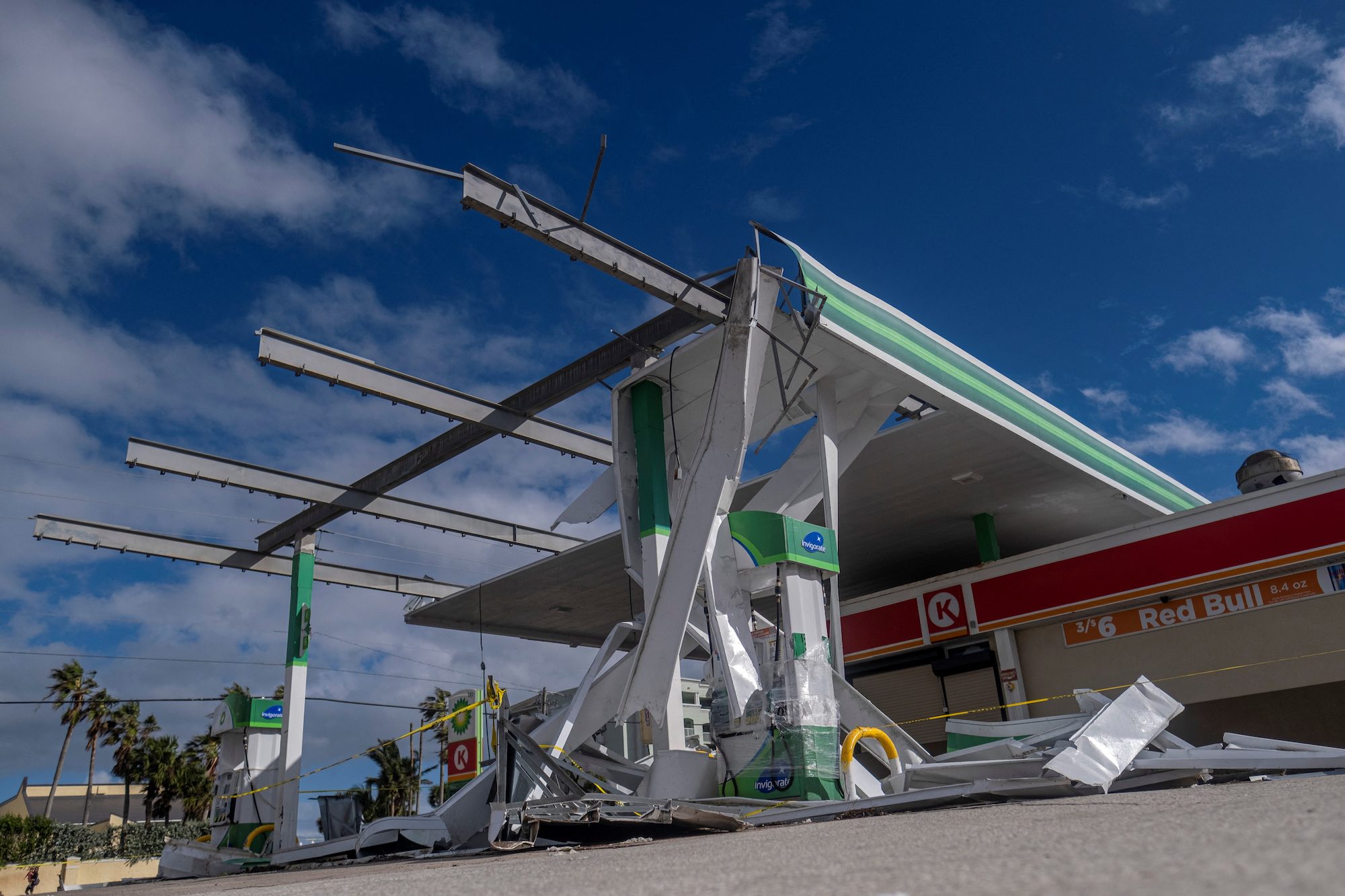 Facebook Twitter Copy URL
Copied
As many as 350,000 homes and businesses across Florida are without power after the storm struck the Atlantic Coast near Vero Beach, north of Miami

As many as 350,000 homes and businesses across Florida were without power on Thursday after the storm struck the Atlantic Coast near Vero Beach, north of Miami, at 3 am EST (0800 GMT), as a late-season hurricane packing sustained winds of 75 miles per hour (120 km per hour).

The year’s eighth Atlantic hurricane and its 14th named cyclone system, Nicole was downgraded to a tropical storm soon after moving inland.

“We’re ready and resources are available for the post-storm needs,” Florida Governor Ron DeSantis said at a press conference. “This is still a large storm and it is impacting much of the state. Winds are the main concern with Nicole.”

Several beachfront homes collapsed in the upscale community of Wilbur-by-the-Sea, just south of Daytona Beach, and several more were left teetering on the brink after surging waves of surf kicked up by high winds undercut the buildings’ foundations.

The homes had already been vacated and no one was injured, Volusia County Sheriff Mike Chitwood said.

About 150 residents from two shoreside condominium complexes had been evacuated on Wednesday because the buildings were in danger of collapse from crumbling seawalls, Chitwood said.

In Vero Beach, the Indian River County seat closer to where the storm’s center made landfall, much of the town’s boardwalk was washed out by pounding waves cresting 25 to 30 feet high.

Volusia and Indian River counties were among several east coast areas hard hit six weeks ago by Hurricane Ian, a catastrophic Category 4 storm that initially struck Florida’s Gulf Coast, then swept across the state to the Atlantic, causing some $60 billion in damage and killing more than 140 people.

Kevin Guthrie, Florida’s emergency management director, cautioned residents on Thursday to remain indoors, even if the eye of Nicole had passed.

“There are heavy winds and a potential for tornadoes,” he said.

Wind gusts clocked at 100 mph (161 kph) at the Kennedy Space Center in Cape Canaveral, about 80 miles north of Vero Beach, buffeted a new $4 billion moon rocket that NASA left moored to its launchpad to ride out the storm. But NASA said early inspections showed the spacecraft sustained only minor damage such as loosened caulk and torn weather coverings.

By evening, Nicole had veered to the northwest as it churned over central and northern Florida toward the panhandle on the Gulf Coast, with maximum sustained winds clocked at 40 mph (65 kph), mainly over the Gulf of Mexico, the National Hurricane Center reported.

Nicole was expected to weaken into a tropical depression Thursday night and dissipate further while remnants of the storm move through Georgia and into the Carolinas over the next two days, bringing heavy rains along the way.

Showers and blustery winds from the storm extended as far away as Atlanta, Georgia’s largest city in the state’s northern tier, by afternoon.

Most of Florida’s 22 million residents remained under various storm warnings and watches. Video showed whitecapping waves barreling ashore and crashing over beaches as winds whipped electrical lines and the tops of palm trees.

Officials said two people died on Thursday after coming into contact with a wind-downed power line. About 17,000 utility workers were staged across the state to restore electricity once the storm was over.

More than 60 school districts across the state were shuttered on Thursday. Orlando International Airport ceased commercial flights on Wednesday while Walt Disney parks and other theme parks were temporarily closed.

Before reaching Florida, Nicole unleashed extensive flooding across much of the Bahamas, including the islands of Grand Bahama, Eleuthera, Andros and the Abacos.

The storm was declared a hurricane on Wednesday evening as it made its first landfall on Grand Bahama island in the northwestern corner of the Atlantic West Indies archipelago nation.

Nicole is only the second hurricane on record to make landfall in the continental United States after Nov. 4. Hurricane Kate came ashore near Mexico Beach, Florida, on November 21, 1985, said Philip Klotzbach, a hurricane expert at Colorado State, on Twitter.