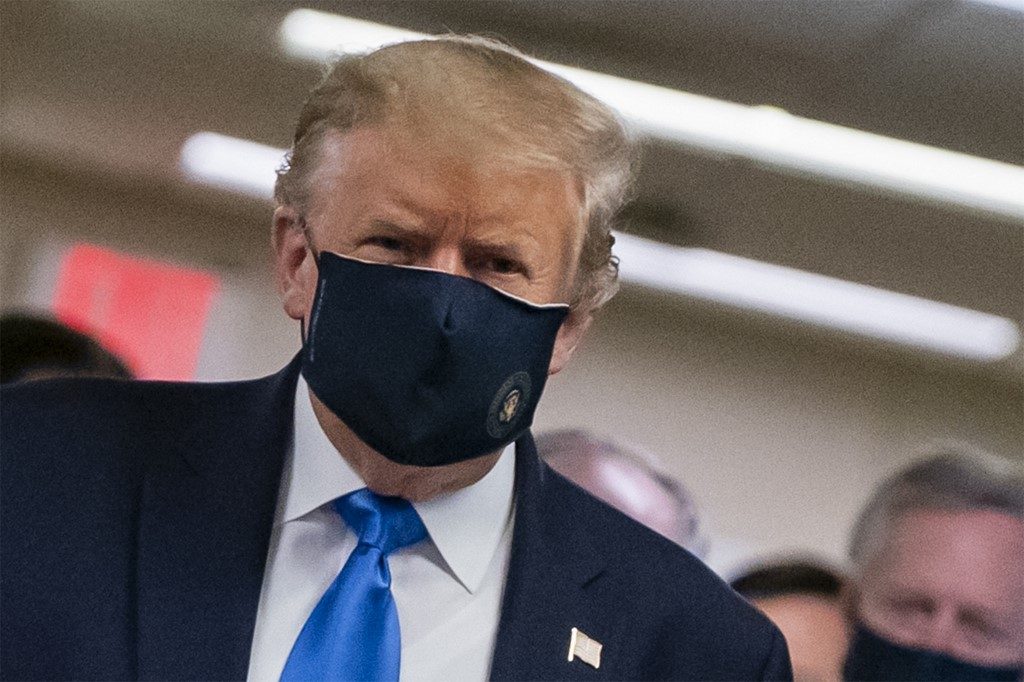 Facebook Twitter Copy URL
Copied
'Many people say that it is Patriotic to wear a face mask when you can't socially distance,' Trump tweets. 'There is nobody more Patriotic than me, your favorite President!'

US President Donald Trump promised Monday, July 20, to resume televised coronavirus briefings and finally spoke out in favor of mask-wearing – a marked change of tune as polls show him headed for election disaster.

With only just over 100 days until the election against Democrat Joe Biden, Trump is scrambling to respond to public anger over his troubled months-long handling of the pandemic.

Since the virus first hit the United States, Trump has insisted that it will just “disappear.”

But that sunny claim is now badly strained even among loyal supporters, as they watch COVID-19 cases surge through populous Republican-led states like Florida and Texas.

Throughout, he has sought to deny the seriousness of the problem, an attitude symbolized by his mockery of masks and refusal to back up doctors’ recommendations for mass use.

Trump went some way to addressing that Monday with a tweeted picture of himself in a black mask with the presidential seal and a call for patriotism.

“Many people say that it is Patriotic to wear a face mask when you can’t socially distance,” Trump wrote. “There is nobody more Patriotic than me, your favorite President!”

However, his tweet stopped well short of endorsing calls from some for a nationwide mandate to wear masks in public.

So, likely from Tuesday he will resume the regular evening televised briefings from the White House that he gave until late April, often finding himself accused of giving confusing or misleading information.

“I think it’s a great way to get information out to the public,” he told reporters. “We’re doing very well in so many different ways.”

Trump acknowledged a current “big flare-up” of cases in the country but once again distanced himself from responsibility for the problem, underlining that the disease is also ravaging “Mexico, Brazil, many countries in Europe, all over, Russia.”

“When you watch the news, the local news, and you see it, and it’s, it’s like all about the United States. They never like to talk about what’s going on in the world,” he said.

Trump said the briefings would focus on good news regarding vaccine development and therapeutics.

“We think we’re doing very well in that regard,” he said. “I think I’m going to be bringing in some of the great companies that are working very successfully.”

“We’re really coming up with some very good answers,” he said.

Trump has great faith in his ability before the cameras. He has transformed the image of the US presidency during his first term with unprecedented streams of press conferences, tweets and rallies.

But his previous spell as the nation’s pandemic-spokesman in chief ended badly in late April.

Trump often turned what were billed as opportunities to provide the anxious public with information into testy exchanges with reporters in the White House briefing room.

He finally ditched the events after a PR fiasco where he mused on air about the possibility of injecting household disinfectant to combat COVID-19.

He later said he had been speaking “sarcastically,” although there was no evidence of that at the time.

The president has consistently sought to play down the severity of the health crisis, hoping that voters will instead focus on what he touts as his good management of the economy.

In an interview with “Fox News Sunday,” he once again claimed that the virus, which has killed more than 140,000 Americans and caused massive economic disruption, would somehow go away by itself.

“I’ll be right eventually,” he said.

But with the virus on the rebound, he finds himself accused of failing to lead.

Trump, nevertheless, appears to be looking forward to his chance to get back to the briefing room podium.

“We had very successful briefings. I was doing them and we had a lot of people watching, record numbers watching. In the history of cable television, there’s never been anything like it,” he said. – Rappler.com