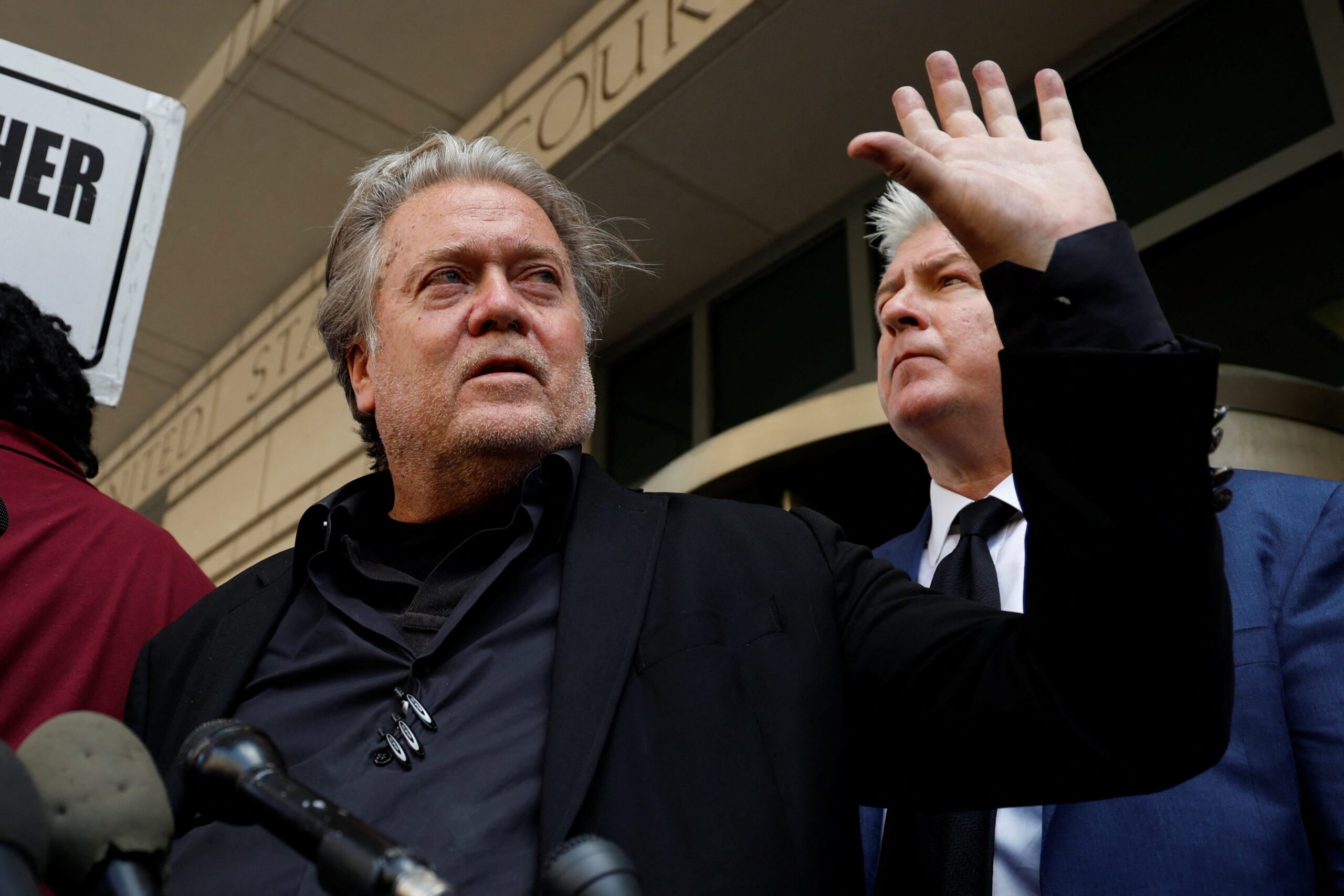 GUILTY. Former US president Donald Trump's White House chief strategist Steve Bannon gestures as he departs after he was found guilty during his trial on contempt of Congress charges for his refusal to cooperate with the US House Select Committee investigating the January 6, 2021, attack on the Capitol, at US District Court in Washington, US, July 22, 2022.

Facebook Twitter Copy URL
Copied
A jury finds Steve Bannon, 68, guilty of two misdemeanor counts for refusing to provide testimony or documents to the House of Representatives select committee as it scrutinizes the January 6, 2021 rampage

WASHINGTON, DC, USA – Steve Bannon, a key associate of former president Donald Trump and an influential figure on the American right, was convicted on Friday, July 22, of contempt of Congress for defying a subpoena from the committee probing last year’s attack on the US Capitol, a verdict the panel called a “victory for the rule of law.”

A jury found Bannon, 68, guilty of two misdemeanor counts for refusing to provide testimony or documents to the House of Representatives select committee as it scrutinizes the January 6, 2021, rampage by Trump supporters who tried to upend the results of the 2020 presidential election.

Each count is punishable by 30 days to one year behind bars and a fine of $100 to $100,000. US District Judge Carl Nichols set an October 21 sentencing date.

The verdict by the jury of eight men and four women, after less than three hours of deliberations, marked the first successful prosecution for contempt of Congress since 1974, when a judge found G. Gordon Liddy, a conspirator in the Watergate scandal that prompted president Richard Nixon’s resignation, guilty.

Bannon was a key adviser to the Republican Trump’s 2016 presidential campaign, then served as his chief White House strategist during 2017 before a falling out between them that was later patched up. Bannon also has played an instrumental role in right-wing media.

“We lost a battle here today. We’re at war,” Bannon told reporters after the verdict.

Bannon castigated the “members of that show-trial committee” who he said “didn’t have the guts to come down here and testify in open court.” Bannon opted not to testify in his own defense.

“The conviction of Steve Bannon is a victory for the rule of law,” Committee Chairman Bennie Thompson, a Democrat, and Vice Chair Liz Cheney, a Republican, said in a statement.

“Just as there must be accountability for all those responsible for the events of January 6th, anyone who obstructs our investigation into these matters should face consequences. No one is above the law,” they added.

Bannon’s defense team in closing arguments on Friday suggested that Bannon was a political target and painted the main prosecution witness as a politically motivated Democrat with ties to one of the prosecutors, including belonging to the same book club. The prosecution said Bannon showed disdain for the authority of Congress and needed to be held accountable for unlawful defiance.

Prosecutor Molly Gaston told jurors the attack represented a “dark day” for America, adding: “There is nothing political about finding out why January 6 happened and making sure it never happens again.”

After the verdict, David Schoen, one of Bannon’s attorneys, promised his client will have “a bullet-proof appeal.”

The judge limited the scope of the case Bannon’s team could present. Bannon was barred from arguing that he believed his communications with Trump were subject to a legal doctrine called executive privilege that can keep certain presidential communications confidential and was prohibited from arguing he relied upon an attorney’s legal advice in refusing to comply.

In two days of testimony, prosecutors questioned only two witnesses and the defense called none.

The conviction may strengthen the committee’s position as it seeks testimony and documents from others in Trump’s orbit. Trump last year asked his associates not to cooperate, accusing the committee of trying to hurt him politically. Several rebuffed the panel.

Another former Trump adviser, Peter Navarro, was charged with contempt of Congress in June for refusing a committee deposition. Navarro’s trial is scheduled for November. The Justice Department opted not to charge Trump associates Mark Meadows and Daniel Scavino for defying the committee despite a House vote recommending it.

The main prosecution witness was Kristin Amerling, a top committee staffer who testified that Bannon spurned deadlines to respond to last September’s subpoena, sought no extensions and offered an invalid rationale for his defiance: Trump’s claim of executive privilege.

The Justice Department charged Bannon last November after the Democratic-led House voted the prior month to hold him in contempt. Bannon separately was charged in 2020 with defrauding donors to a private fund-raising effort to boost Trump’s project to build a wall along the US-Mexican border. Trump pardoned Bannon before that case went to trial.

According to the committee, Bannon spoke with Trump at least twice on the day before the attack, attended a planning meeting at a Washington hotel and said on his right-wing podcast “all hell is going to break loose tomorrow.”

Bannon’s defense argued he believed the subpoena deadlines were flexible and subject to negotiation. In an 11th-hour reversal with the trial looming, Bannon this month announced a willingness to testify in a public committee hearing, an offer prosecutors said did not change the fact he had already broken the law. – Rappler.com