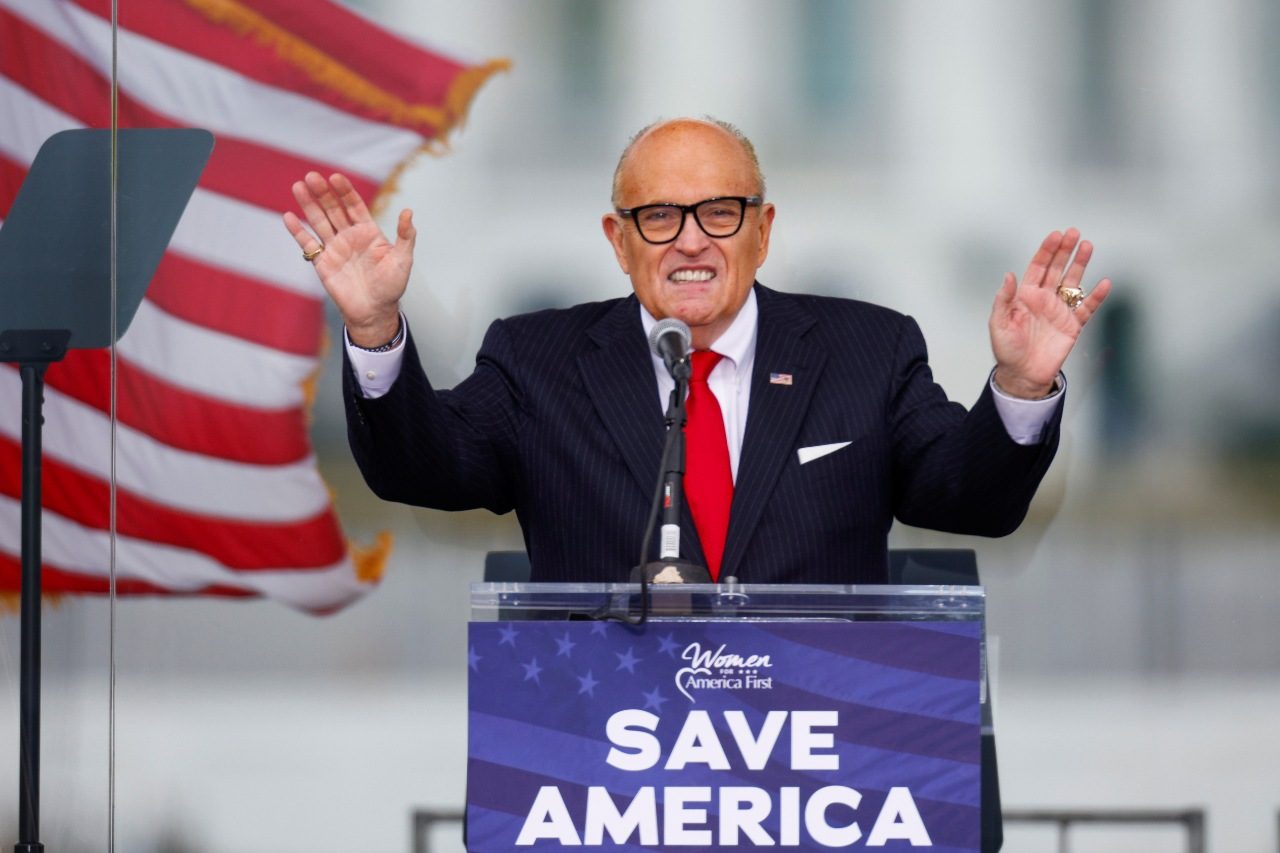 LAWSUIT. US President Donald Trump's personal lawyer Rudy Giuliani speaks as Trump supporters gather by the White House ahead of his speech to contest the certification by the US Congress of the results of the 2020 US presidential election in Washington, US, on January 6, 2021.

Facebook Twitter Copy URL
Copied
Rudy Giuliani has stood by his claims about the election, saying he is being attacked for 'exercising my right of free speech and defending my client'

A US voting machine company filed a $1.3 billion lawsuit against former President Donald Trump’s lawyer Rudy Giuliani, accusing him of defamation in what it called his “big lie” campaign about widespread fraud in the presidential election, court documents on Monday, January 25, showed.

A senior Dominion employee, Eric Coomer, also filed a defamation lawsuit against the Trump campaign, saying he had been driven into hiding because of death threats from Trump supporters.

Giuliani and his lawyer, Robert Costello, did not immediately respond to requests for comment.

Giuliani has stood by his claims about the election, saying during a radio show last week he is being attacked for “exercising my right of free speech and defending my client.”

Trump and his allies spent two months denying his election defeat, and claiming without evidence that it was the result of widespread voter fraud, before his supporters stormed the Capitol on January 6.

Dominion is seeking $1.3 billion in damages from the former New York City mayor, alleging in the lawsuit that “he and his allies manufactured and disseminated the ‘Big Lie,’ which foreseeably went viral and deceived millions of people into believing that Dominion had stolen their votes and fixed the election.”

Dominion said it filed the lawsuit “to set the record straight” and to “stand up for itself, its employees, and the electoral process.”

A group of prominent attorneys last week asked New York’s judiciary to suspend Giuliani’s law license because he made false claims in post-election lawsuits and for urging Trump’s supporters to engage in “trial by combat” shortly before they stormed the US Capitol on January 6.

Dominion states in its lawsuit that it has spent $565,000 on private security to protect its employees, who are facing harassment and death threats.

“Giuliani’s statements,” the lawsuit stated, “were calculated to – and did in fact – provoke outrage and cause Dominion enormous harm.”

Founded in 2002, Dominion is a major US manufacturer of voting machines, and various Dominion machines were used in more than two dozen states during the 2020 election. – Rappler.com