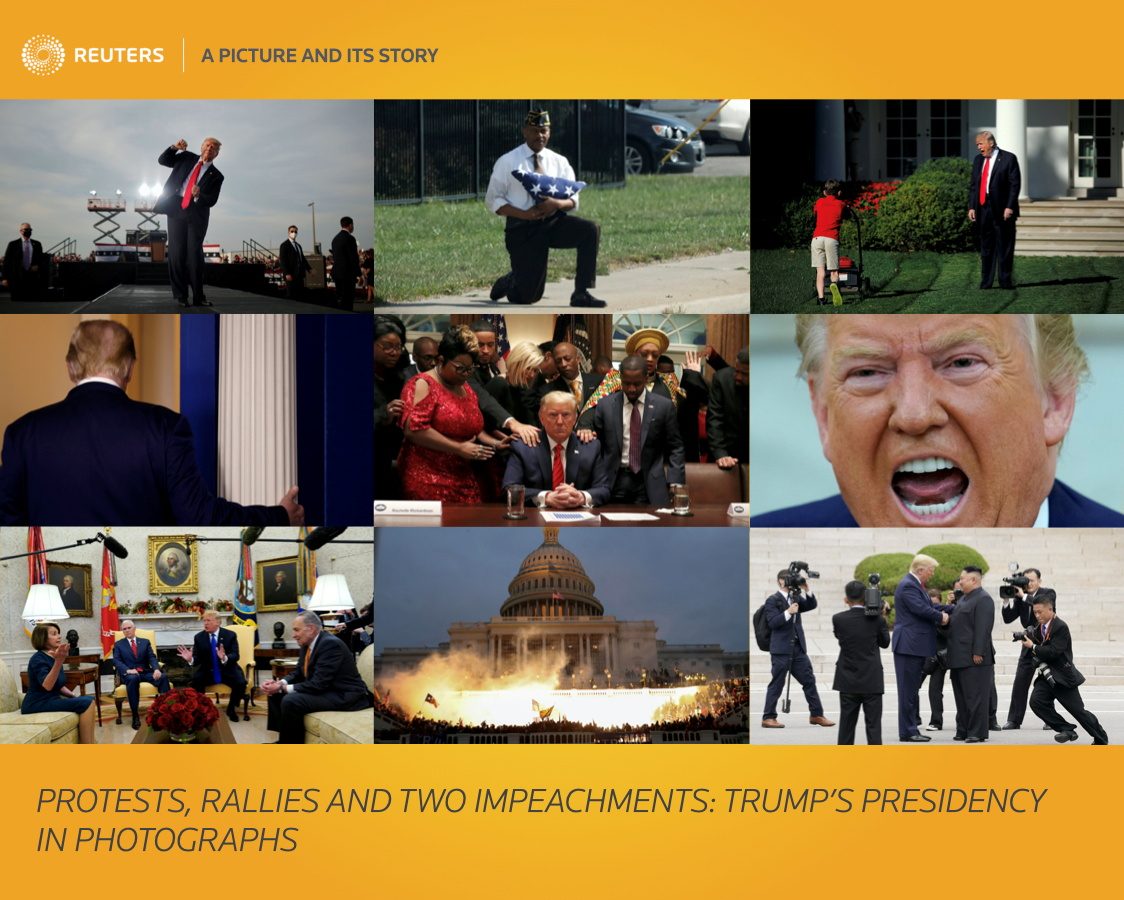 TRUMP PRESIDENCY. Here is a selection of a dozen standout Reuters pictures taken during the past 4 years, along with the stories behind them in the photographers' own words.

Facebook Twitter Copy URL
Copied
Here's a selection of a dozen standout Reuters pictures taken during the past 4 years, along with the stories behind them in the photographers' own words

From a reality TV star’s journey to the White House, to mass protests, pumped up crowds, the siege on the US Capitol and two impeachments, Reuters photographers were on the ground covering the most important stories during US President Donald Trump’s one-term tenure.

Below is a selection of a dozen standout Reuters pictures taken during the past 4 years, along with the stories behind them in the photographers’ own words.

Jonathan Ernst: “This picture is from a rally in Albuquerque, New Mexico, on his first road swing with a traveling press contingent.

“When the woman in this picture began to protest, Trump stopped speaking and turned around to watch. As she resisted her removal by police officers, her clothes were being torn from her. I didn’t witness anyone come to her aid to help protect her modesty, but many people were taking pictures and video. As I snapped this frame, one onlooker’s camera flash went off and lit the chaotic scene around her.”

Carlos Barria: “Once in a while I have the chance to witness a natural, unscripted moment. During a typical morning in September, I got the announcement that the White House Pool would gather by the door of the Rose Garden for a photo opportunity.

“As it happened, President Donald Trump was planning to surprise 11-year-old Frank Giaccio – a youngster who wrote a letter to Trump offering to mow the White House lawn. Giaccio had then been invited to work for a day at the White House alongside National Park Service staff.

“As we waited for Trump to show up I saw that Giaccio was very focused on this job trying to cut the grass in straight lines, and not paying much attention to the group of journalists, photographers and cameramen milling around the garden.

“Suddenly, from the other side of a hedge, wearing his signature long, red tie, President Trump made his appearance. As Trump approached, he began shouting to the boy above the noise of the lawnmower, but it was too loud and Giaccio was so focused on his job that he never noticed Trump. He walked right past, pushing the machine.

“Trump paused for a second and walked to the end of the lawn to talk to Giaccio, but again, the boy didn’t stop mowing the grass. He kept going until his father rushed onto the scene to grab his attention, and then he finally stopped to greet Trump.”

Ernst: “One early controversy during the Trump presidency was his speaking out against professional athletes protesting police violence by kneeling during the national anthem.

“He was motorcading through…Indianapolis…and I wondered if he might encounter anyone kneeling along the route. Sure enough, a military veteran was kneeling with a folded US flag outside the funeral home where he worked. We buzzed by him too quickly to compose a picture of him on the way to the event, but I made a mental note of his location and made this picture on the return trip an hour later.”

Barria: “Trump’s spirits always seemed to be buoyed at rallies. Trump is well known as a reality TV personality, and he’s comfortable, even happy, in the spotlight.

“At the end of a campaign rally in Florida in October, I could see that Trump was in a good mood. He started to dance, which made the crowd go wild. I moved to the back of the stage and when he turned towards me I captured the moment.”

Kevin Lamarque: “The much-anticipated meeting with North Korean Leader Kim Jong-un and President Donald Trump on the DMZ (Demilitarized Zone)…was a perfect storm of the security services from 3 countries trying to keep the media from 3 countries at bay and their leaders safe. This photo came about after Trump crossed the DMZ demarcation line into the North Korean side to meet Kim. I think the photographer in motion trying to get his position adds a sense of urgency and stress to the moment.”

Ernst: “On this night, protesters who had gathered near the White House in response to the police killing of George Floyd in Minneapolis were met by riot police firing tear gas and rubber ordnance. Protesters will frequently use the White House as a backdrop for their cause, but this was the first time I’d seen it quite like this – with maybe the world’s most recognizable façade looming behind a cloud of smoke and the silhouetted figures of protesters dodging…projectiles.”

Leah Millis: “After meeting with some of his prominent Black supporters, the group…prayed with President Trump in the Cabinet Room of the White House. This photograph seemed to resonate with people.”

Lamarque: “An Oval Office meeting over a government shutdown was not going well.

“I think the expressions on the faces of all the players speaks to the frustration of trying to achieve something when your mindsets are miles apart. Being in the room felt incredibly awkward, like listening to your neighbors have a knock-down, drag-out fight, except these are not your neighbors, they are your leaders.”

Millis: “I chose this photograph because I felt that it was a fascinating moment in history. It was the night before the president’s first impeachment trial and it was also the annual State of the Union address. I was lucky enough to be the news pool photographer on the floor, so I got to photograph this interaction between President Trump and Chief Supreme Court Justice John Roberts before Trump gave his speech. The next day, Justice Roberts presided over the Senate trial acquitting President Trump.”

Lamarque: “Talk of impeachment enraged President Trump, as was the case here in the Oval Office. But rage was not limited to the Oval office. Trump’s rallies also were filled with rage. It was seen in meetings both domestic and abroad.

“I often shoot and crop for very tight faces as a way to truly show the emotion of the moment, as it did here.”

Barria: “As the entire country waited for the results of the 2020 US presidential elections, tensions were building at the White House.

“I was on duty as a member of the press pool on November 5, two days after Election Day and without a declared winner, when it was announced that President Donald Trump was going to deliver remarks in the White House briefing room.

“Only a small number of people are authorized to be in the briefing room during the global pandemic. The president walked in, carrying a folder with some notes for his remarks. ‘If you count the legal votes, I easily win,’ Trump said in his first public appearance since election night. ‘They’re trying to rig an election, and we can’t let that happen.’

“Then he abruptly left the room without taking any questions from reporters.

“I had him in my frame using my telephoto lens as he approached the exit, and I followed him in that tight frame as he put his arm around a column. I shot that gesture. He was holding onto the column which I interpreted as him wanting to stay for another 4 years.”

Millis: “I took this photograph at the end of January 6, 2021, a date that will now forever be remembered here in America.

“Throughout that afternoon, thousands of supporters of President Donald Trump had stormed the US Capitol Building, hundreds of whom had successfully breached the doors and gained access to the heart of our most important government building.

“I switched my camera bodies to the wide lens to capture the chaotic scene, making sure that the context of the Capitol was visible. This photograph was taken at the height of the explosion of one of the flash bang grenades.

“This photograph…looks like a battle scene from years past with flags and a mass of people who look almost like a small army. What stands out to me is the shadow cast by the US flag on the dome from the blast, as it continues to fly above the scene.” – Rappler.com