From bomb shelter to dorm room: Ukrainian students find refuge at US colleges AT SCHOOL. Hlib Burtsev and Oleksii Shebanov, both from Ukraine, check their email in the common area of their dorm ahead of their first year at Brown University in Providence, Rhode Island, U.S., August 16, 2022.

Facebook Twitter Copy URL
Copied
More than 120 US universities have efforts to help Ukrainian students, according to a survey of 559 schools by the Institute of International Education

Hlib Burtsev wanted to film himself opening admissions decisions from US universities and share the videos online, imagining the hugs and cheers from his family if he got good news.

But when those decisions came, the 18-year-old was often huddled in a windowless room or bomb shelter in Kyiv, Ukraine. Air raid sirens and darkness frustrated his plans.

On March 31, about a month after Russia invaded Ukraine, he won a spot at Brown University for this fall. The Ivy League school extended an offer for him to join its summer session and paid for his food, flights, and housing because of the war in his country.

“I didn’t expect such support from a university somewhere very far away,” Burtsev said. “Everything is very exciting, new people, new opportunities.”

More than 120 US universities have efforts to help Ukrainian students, according to a survey of 559 schools by the Institute of International Education (IIE), though the actual number is likely far higher.

The assistance includes extra time to complete applications, waivers for certain official documents, more spots for Ukrainian students, and financial aid. As the conflict enters its sixth month, some of these students are now arriving on college campuses for the fall semester.

The University of Chicago launched a $20 million initiative that includes tuition for Ukrainian students. Texas A&M subsidized tuition, fees, and living expenses. Hampton University in Virginia invited up to 100 students affected by the war to study on campus for free during the summer. 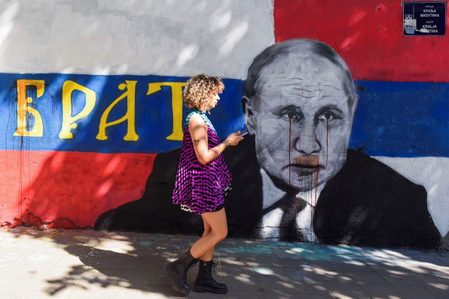 Ukrainian students had to overcome many obstacles. The US embassy in Kyiv is not issuing student visas, forcing them to visit a consulate elsewhere, and leaving Ukraine is difficult for males, who must prove they are students to avoid a draft.

Oleksandr Sinhayivskyy, an 18-year-old who will attend Georgetown University this fall, was only able to leave Ukraine for Moldova on his fourth attempt. He traveled to Romania for a visa, spending two weeks in a hotel with Georgetown’s help.

Once in the United States, many Ukrainian students are conflicted, feeling both gratitude and guilt. They worry about family members at home, and many are motivated to pursue training that will help them rebuild their country.

“Every single Ukrainian student who I’ve spoken to wants to go back,” said Yale University professor Arne Westad, an expert in Russian history. “And they really want to go back as quickly as possible.”

Most of the schools are extending similar help to Russian students, recognizing they cannot influence their government’s policy in Ukraine and are also experiencing the war’s turmoil.

Arsenyi T., a student from Moscow, sheltered in Latvia as fighting broke out and could not finish Russian high school or take state exams. But SUNY Maritime College allowed him to submit some application materials late and offered him a spot for the fall, enabling him to defer being drafted by Russia.

Sinhayivskyy had planned to study business at Georgetown. But after seeing his country’s devastation, he will study international relations and become a politician in Ukraine.

“I did not change the direction with my own compass,” he said. “The poles shifted themselves, turning me in another direction.” – Rappler.com