Facebook Twitter Copy URL
Copied
In some instances, clinics are relocating to nearby states likely to protect abortion rights

Jennifer Kerns, a California physician, will soon also practice 1,800 miles away at an abortion clinic in Kansas, where women from nearby states in the Midwest with bans on the procedure are expected to seek care.

Abortion clinics and providers say Kerns is among dozens of doctors who have recently sought new medical licenses in states where abortion could remain legal, anticipating Friday’s landmark decision by the US Supreme Court to end recognition of a woman’s constitutional right to terminate a pregnancy.

“We felt like this was part of our responsibility – to provide services in a place where they’re really needed,” said Kerns, a surgeon who teaches and practices at the University of California, San Francisco, medical school. She plans to fly to Wichita, Kansas, when her schedule allows.

Adding out-of-state doctors is just one of the measures being taken by abortion clinics facing an uncertain landscape in which abortion access will be decided state by state, threatening to put some clinics out of business, and straining those that remain with more patients.

In some instances, clinics are relocating to nearby states likely to protect abortion rights. Others are developing legal strategies to fend off restrictions, and helping people figure out how to obtain abortions in different states. And at clinics in states like California where women are likely to travel for the procedure, preparations are underway to add services and staff. More than half the states in the country could soon have laws banning or severely restricting abortion following Friday’s ruling. Already, 13 states have so-called trigger laws, or abortion bans that quickly take effect after federal protections are eliminated, according to the Guttmacher Institute, a research group that supports abortion rights.

In North Dakota, which has a trigger law, Tammi Kromenaker is scrambling to open a new abortion facility across the border in Minnesota. Kromenaker, who has run North Dakota’s only abortion clinic, the Red River Clinic, for 24 years, said two of the clinic’s doctors are already licensed in Minnesota, and a third is working to get a license there.

In other states with trigger laws, clinics are already in the process of halting abortions. Even in advance of the Roe decision, a statewide ban in Oklahoma forced clinics to stop taking appointments for the procedure.

Clinics run by Planned Parenthood in Utah, another trigger law state, said they will stay open as long as possible, hoping to use the legal system to delay or overturn bans passed by lawmakers.

Lawyers representing abortion providers are coalescing around a plan to argue that privacy and equal protection rights in the constitutions of many states protect abortion without explicitly saying so.

“We have no intention of immediately saying this is the end of the road,” said Wellspring Health Access president Julie Burkhart, who plans to open a clinic in conservative Wyoming, arguing the state constitution’s emphasis on liberty protects abortion rights.

The strategy, said Cary Franklin, faculty director of the Center for Reproductive Health, Law and Policy at the University of California, Los Angeles, is to establish wherever possible that abortion is a state right even if the Supreme Court has ruled it’s not a protected federal right.

The legal strategy is already being tested in Pennsylvania, where the Women’s Law Project is arguing in court that the state’s constitution protects abortion rights, even as conservative lawmakers back an amendment to outlaw it, said policy and advocacy director Amal Bass. 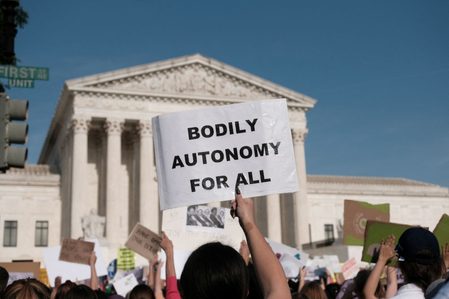 In Kansas, where the state supreme court has already ruled there is a right to an abortion in its constitution, proponents figure that even if a proposed new amendment banning abortion is approved by voters in August, they have about a year to stave off restrictions through legal challenges.

Kerns’ new Kansas license is the second one she has obtained in less than a year. She earlier became licensed in Oklahoma, providing abortions to women fleeing restrictions in neighboring Texas until Oklahoma enacted its own ban last month.

And if Kansas bans abortion, too?

“All those people would have to come to Colorado or New Mexico,” she said. “I would get licensed in those states.” – Rappler.com