US appeals court reinstates Texas abortion law, two days after it was halted 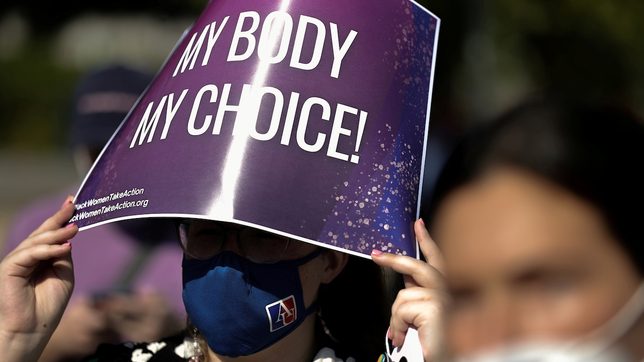 MY BODY, MY RIGHTS. A demonstrator holds a pro-abortion rights sign as she listens to speakers at a Black Women Take Action event outside the U.S. Supreme Court building in Washington, US September 15, 2021.

A United States appeals court late on Friday, October 8, temporarily reinstated Texas’s restrictive abortion law, which bars the procedure as early as six weeks into pregnancy and outsources enforcement of the ban to ordinary citizens.

The US Court of Appeals for the Fifth Circuit, a conservative-leaning intermediate appeals court, granted a request on Friday by the Texas Attorney General’s Office to temporarily suspend a judge’s order blocking the abortion ban.

Justice Department representatives did not immediately respond to a request for comment.

The Texas abortion law, which took effect on September 1, makes no exceptions for pregnancies caused by rape or incest. It also lets ordinary citizens enforce the ban, rewarding them at least $10,000 if they successfully sue anyone who helped provide an abortion after fetal cardiac activity is detected. Critics of the law have said this provision enables people to act as anti-abortion bounty hunters.

Texas law sparks hundreds of US protests vs abortion restrictions 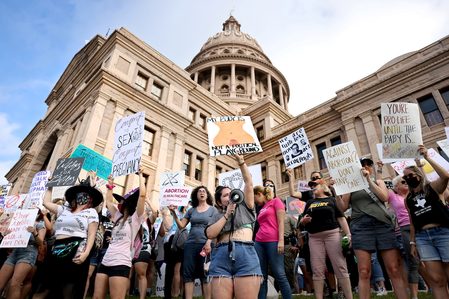 US District Judge Robert Pitman in Austin on Wednesday temporarily blocked the abortion ban while litigation over its legality continues.

The Justice Department has argued that the law impedes women from exercising their constitutional right to terminate a pregnancy that was recognized in the Supreme Court’s 1973 Roe v. Wade decision, which legalized abortion nationwide. The department also argued that the law improperly interferes with the operations of the federal government to provide abortion-related services.

“This is a deeply alarming order that will allow Texas’ abortion ban to go back into effect at a time when abortion providers were quickly starting to resume abortion care for all patients,” said Brigitte Amiri, a lawyer with the American Civil Liberties Union.

Amiri said the ACLU hopes the litigation “moves swiftly” so the Texas abortion law can be halted again, potentially by the US Supreme Court. – Rappler.com