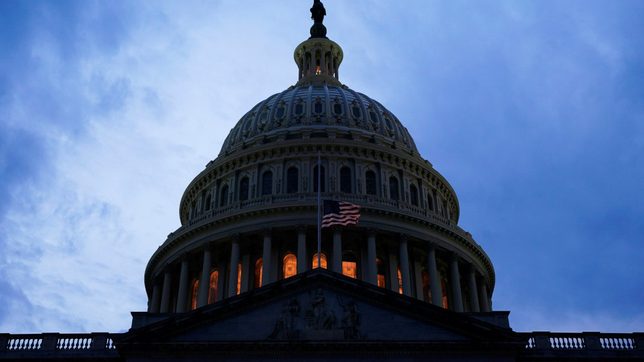 CAPITOL. The US Capitol building is seen in Washington, DC, USA on December 6, 2021.

Facebook Twitter Copy URL
Copied
The defense bill omits some measures with strong support in Congress, including a proposal to impose mandatory sanctions over the Russian Nord Stream 2 gas pipeline and a plan to have a military draft for women

WASHINGTON, DC, USA – US lawmakers included efforts to push back against Russia and China in a compromise version of a massive annual defense bill released on Tuesday, December 7, proposing $300 million for Ukraine’s military and a statement of support for the defense of Taiwan.

But they omitted some measures that had strong support in Congress, including a proposal to impose mandatory sanctions over the Russian Nord Stream 2 gas pipeline and a plan to subject women to the military draft for the first time.

The bill – the result of intense negotiations between House of Representatives and Senate Democrats and Republicans – includes a 2.7% pay increase for the troops, and more aircraft and Navy ship purchases, in addition to strategies for dealing with geopolitical threats.

The NDAA normally passes with strong bipartisan support, and the House of Representatives backed the compromise measure by 363-70 later on Tuesday.

The bill is closely watched by a broad swath of industry and other interests because of its wide scope and because it is one of the only major pieces of legislation that becomes law every year.

This year’s bill was released shortly after US President Joe Biden and Russian President Vladimir Putin held two hours of virtual talks on Ukraine and other disputes.

It does not include a provision that would force Biden to impose sanctions over the $11 billion Nord Stream 2 pipeline to bring Russian gas directly to Germany. The measure’s supporters argue that the pipeline would be harmful to European allies.

Lawmakers also omitted an amendment that would have banned Americans from purchasing Russian sovereign debt.

Biden’s fellow Democrats control both the House and Senate. The White House has said it supports sanctions if Russia invades Ukraine, but not provisions that could threaten trans-Atlantic ties.

On China, the bill includes $7.1 billion for the Pacific Deterrence Initiative and a statement of congressional support for the defense of Taiwan, as well as a ban on the Department of Defense procuring products produced with forced labor from China’s Xinjiang region.

The United States has labeled China’s treatment of its Uyghur Muslim minority in Xinjiang as genocide, and lawmakers have been pushing a ban on imports of products made with forced labor from Uyghurs. China dismisses the genocide charge as a slanderous assertion about conditions in Xinjiang.

The compromise NDAA omits a proposal to require women to register for the military draft that was included in earlier versions. It had faced stiff opposition from social conservatives who thought it would erode traditional gender roles, threatening to stymie the entire NDAA.

It includes an overhaul of the military justice system to take decisions on whether to prosecute cases of rape, sexual assault and some other major crimes out of the hands of military commanders.

The change was a partial victory for activists because it did not strip military commanders of the authority to prosecute all felonies. It came after Democratic Senator Kirsten Gillibrand led a years-long effort to change the system in response to the thousands of cases of sexual assault among service members, many of which are never prosecuted.

Gillibrand said she still wanted a separate vote on her full proposal.

Now that it has passed the House, the NDAA must win Senate backing and be signed by Biden to become law.  – Rappler.com