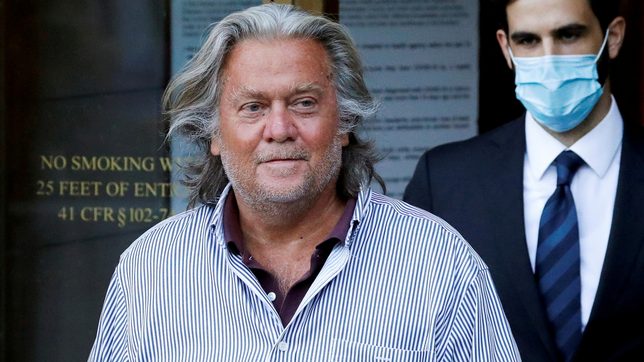 A US congressional committee probing the deadly January 6 assault on the Capitol voted unanimously on Tuesday, October 19, in favor of contempt-of-Congress charges against Steve Bannon, a longtime aide to former President Donald Trump.

The seven Democratic and two Republican members of the House of Representatives Select Committee approved a report recommending the criminal charge by a unanimous 9-0 vote, calling it “shocking” that Bannon refused to comply with subpoenas seeking documents and testimony.

Approval of the report paved the way for the entire House to vote on whether to recommend contempt charges. A source familiar with the schedule said that vote was planned for Thursday.

If the House approves the referral, the Justice Department will decide whether to pursue a criminal case.

“It’s a shame that Mr. Bannon has put us in this position. But we won’t take ‘no’ for an answer,” Representative Bennie Thompson, the panel’s chairman, said in his opening remarks.

Before leaving office in January, Trump pardoned Bannon of charges he had swindled the Republican president’s supporters. Trump has urged former aides subpoenaed by the panel to reject its requests, claiming the right to withhold information because of executive privilege, a legal principle that protects many White House communications.

“Mr. Bannon’s and Mr. Trump’s privilege arguments do appear to reveal one thing, however: They suggest that President Trump was personally involved in the planning and execution of January 6th. And we will get to the bottom of that,” she said.

More than 670 people have been charged with taking part in the riot, the worst attack on the US government since the War of 1812. The select committee has issued 19 subpoenas.

Noting that the committee is investigating a violent attack that took place as lawmakers met to certify the results of the 2020 election, Thompson said: “It’s shocking to me that anyone would not do everything in their power to assist our investigation.” – Rappler.com