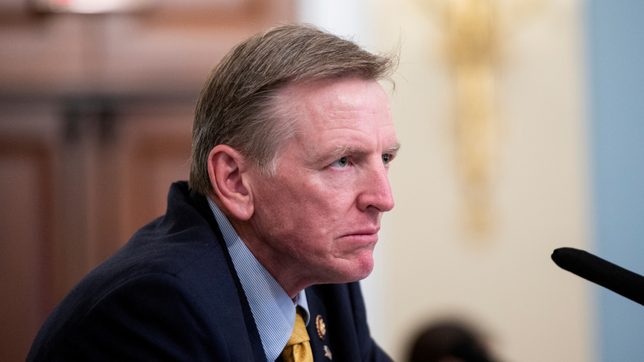 The US House of Representatives prepared to take up a resolution on Wednesday, November 17, to censure a Republican member for a Twitter post depicting himself killing a prominent progressive and attacking President Joe Biden with swords.

Prominent Republicans criticized the Democratic move to discipline Representative Paul Gosar for the video, even as some suggested they strip another Republican of his seat on a prominent House committee for his vote this month in favor of a $1 trillion bipartisan infrastructure bill to fix roads and bridges and expand broadband access.

Gosar posted an anime video this month that showed him killing Democratic Representative Alexandria Ocasio-Cortez. It was the latest instance of escalating violent rhetoric in Congress, 10 months after thousands of Donald Trump supporters launched a deadly assault on the US Capitol.

The resolution, which appeared on the House Rules Committee website on Tuesday evening, also proposes to remove Gosar from the Committee on Oversight, where Ocasio-Cortez serves, and the Natural Resources Committee.

“Not talking,” Gosar told reporters on Tuesday. He said last week he would fight for Trump’s “America First agenda.”

House Speaker Nancy Pelosi, a Democrat, told reporters: “Why go after (Gosar)? Because he made threats, suggestions about harming a member of Congress.”

“We cannot have members joking about murdering each other as well as threatening the president of the United States,” Pelosi said.

Republican Representative Tom Cole said Gosar’s action had been “inappropriate,” but noted that Gosar had made a public statement saying the video was intended to be symbolic and that he had not intended to espouse violence. Gosar also told Republicans at a closed-door meeting earlier on Tuesday that he does not condone violence, Cole said.

“As far as I’m concerned that should have been the end of the matter,” Cole told a meeting of the rules panel on Tuesday night, which was discussing the censure resolution ahead of floor action. The censure vote was planned for Wednesday, a congressional source said.

But top House Republican Kevin McCarthy has not taken action to punish his own members. Republicans say Democrats have gone unpunished for inflammatory rhetoric that they blame for anti-racism protests in US cities in 2020. Some said there could be consequences for Democrats if Republicans retake the House majority in 2022.

At the same time, some conservative Republicans called for Representative John Katko to be removed as top Republican on the House Homeland Security Committee for backing the infrastructure bill, which was opposed by House Republican leaders and Trump, the former president.

House Republicans have struggled internally since the January 6 Capitol riot, which prompted 10 lawmakers including Katko and Representative Liz Cheney to vote for Trump’s second impeachment.

Cheney was ousted as House Republican conference chair in May, and Wyoming Republican leaders voted last weekend to no longer recognize her as a party member, according to a report in the Casper Star-Tribune.

Katko was one of 13 House Republicans who backed the infrastructure legislation, a bipartisan measure that had passed the Senate with support from 19 Republicans including Senate Majority Leader Mitch McConnell.

He appeared undaunted by the criticism.

“I’m focused on securing our border, supporting law enforcement, and stopping Democrats’ reckless spending in the Build Back Better Act. Our conference is united behind these efforts. I intend to continue leading on them,” Katko said in a statement emailed to Reuters.

At a Tuesday party meeting, McCarthy urged members not to seek punishment against Katko and the other 12 House Republicans, according to a person familiar with the discussion. – Rappler.com