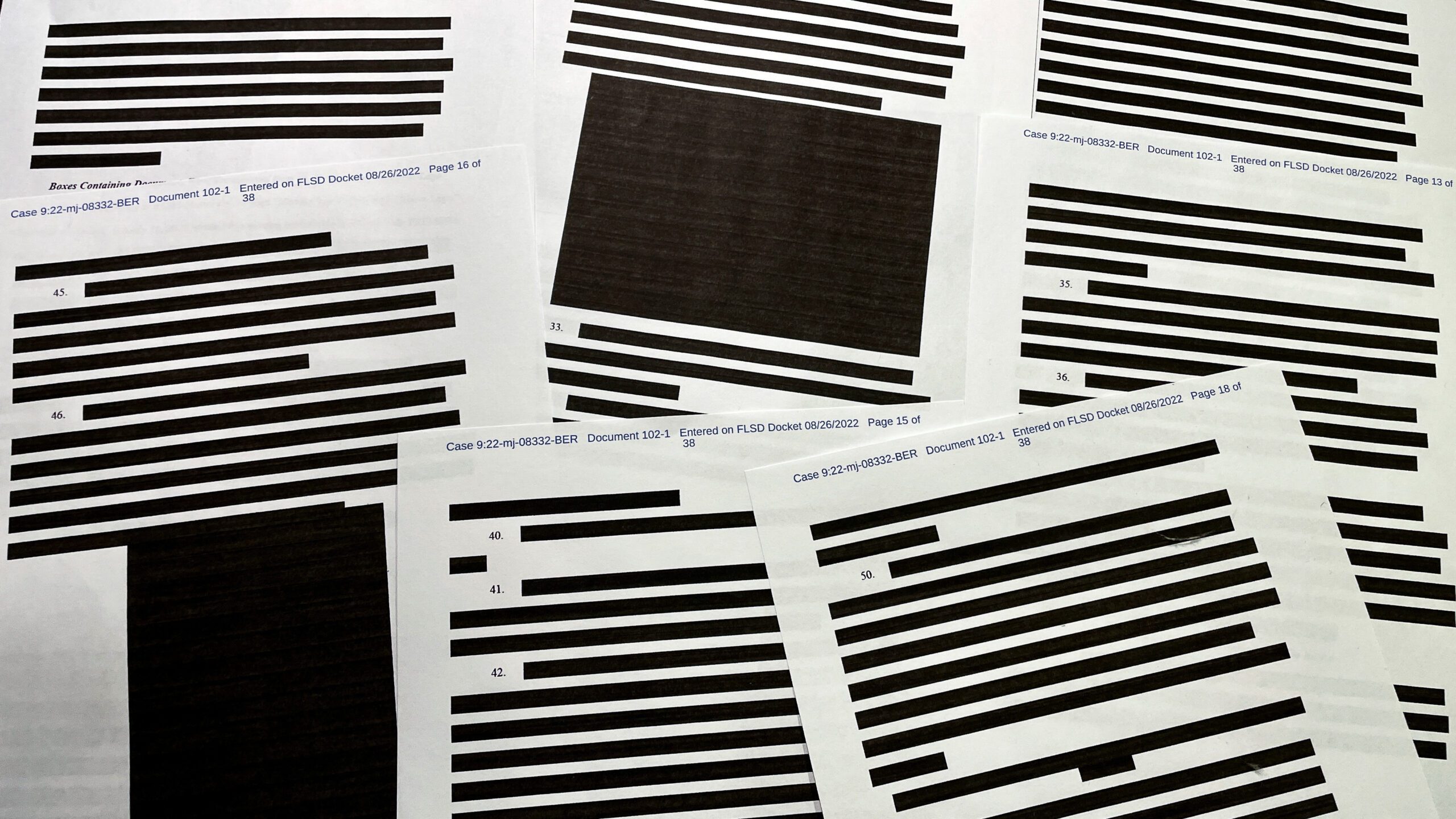 Pages of entirely redacted information are seen in the released version of an affidavit from the US Justice Department that was submitted to a federal judge to support the execution of a search warrant by the FBI at former President Donald Trump's Mar-a-Lago estate after the affidavit was released to the public by the US District Court for the Southern District of Florida with more than half the information in the document redacted in West Palm Beach, Florida, US, August 26, 2022.

Facebook Twitter Copy URL
Copied
Documents released with the affidavit revealed that 'a significant number of civilian witnesses' knowledgeable about Trump's actions after leaving office were helping the probe, a rare disclosure

WASHINGTON, DC, USA – The US Justice Department on Friday, August 26, disclosed that it was investigating former President Donald Trump for removing White House records because it believed he illegally held documents including some involving intelligence-gathering and clandestine human sources – among America’s most closely held secrets.

The department released a heavily redacted affidavit that underpinned the FBI’s extraordinary August 8 search of Trump’s Florida residence in which agents seized 11 sets of classified records including some labeled “top secret” as documents that could gravely threaten national security if exposed.

In the affidavit, an unidentified FBI agent said the agency reviewed and identified 184 documents “bearing classification markings” containing “national defense information” after Trump in January returned 15 boxes of government records sought by the US National Archives. Other records in those boxes, according to the affidavit, bore handwritten notes by Trump.

The search was part of a federal investigation into whether Trump illegally removed and kept documents when he left office in January 2021 after losing the 2020 election to President Joe Biden and whether Trump tried to obstruct the probe.

Trump, a Republican who is considering another presidential run in 2024, has described the court-approved search at the Mar-a-Lago estate in Palm Beach as politically motivated, and on Friday again described it as a “break-in.”

Documents released with the affidavit revealed that “a significant number of civilian witnesses” knowledgeable about Trump’s actions after leaving office were helping the probe, a rare disclosure.

The search was a significant escalation of one of several federal and state investigations Trump is facing involving his time in office and in private business.

The agent who drafted the affidavit wrote that after the FBI reviewed the materials Trump returned in January to the National Archives – the agency responsible for preserving government records – it had probable cause to believe more documents were still inside Mar-a-Lago.

“There is also probable cause to believe that evidence of obstruction will be found at the premises,” the agent added.

Other defense-related records Trump had returned contained references to topics including “clandestine human sources” who help US intelligence-gathering, the affidavit showed, as well as details on how the nation conducts foreign surveillance and information it collected using a law that established the US domestic surveillance program.

The 32-page affidavit, a sworn statement outlining evidence that gave the Justice Department probable cause to ask a judge to approve a search warrant, was heavily redacted at the department’s request. Most pages had at least some portions blacked out. Some completely blacked out. An additional six pages of documents were released with it.

The department had sought to keep the affidavit secret. But after media organizations sued to make it public US Magistrate Judge Bruce Reinhart, who approved the search warrant based on the affidavit, on Thursday ordered the release of a redacted version.

Late on Friday, Trump filed a “supplemental” motion asking the court to block the government from reviewing the documents seized at Mar-a-Lago until a third party known as a “special master” can be appointed to oversee the review. Trump had filed a similar motion on Monday, but US District Judge Aileen M. Cannon asked for more information about the request.

Trump’s lawyers said their motion should be granted because the redacted affidavit “provides almost no information that would allow [Trump] to understand why the raid took place, or what was taken from his home. The few lines that are unredacted raise more questions than answers.”

Trump complained on social media that the released affidavit was “heavily redacted” and demanded that Reinhart step aside from the case, without giving any apparent basis. Trump’s legal team has not formally made such a request.

“Judge Bruce Reinhart should NEVER have allowed the Break-In of my home,” Trump wrote.

Asked by reporters if it is ever appropriate for a president to bring home classified material, Biden said: “It depends on the document and it depends on how secure” the location is.

Biden added that he has a “completely secure” site at his home and that he was taking home on Friday a copy of his daily intelligence briefing, but said those records would later be returned to the military.

The FBI agent said in the affidavit that a preliminary review in May of records the Archives earlier received from Trump found 184 “unique documents” labeled as classified – 67 marked “confidential,” 92 marked “secret” and 25 marked “top secret.”

The newly released documents showed how Trump allies tried to claim he had declassified the records in question as a way to downplay the investigation. The affidavit mentioned an article published in May by Kash Patel, a former Trump administration official who called media reports about the National Archives identifying classified material at Mar-a-Lago “misleading.”

Brandon Fox, a former federal prosecutor now with the law firm Jenner & Block, said the references to Trump’s claims about declassifying the documents are significant, even though much of the material is redacted.

“They likely indicate the proof the DOJ (Department of Justice) believes it has showing that Mr. Trump had not declassified the documents,” Fox told Reuters.

On social media, Patel said the fact his name was left unredacted was evidence of “politicization by DOJ at its finest.”

The newly released documents showed how Trump’s attorneys tried to downplay the department’s concerns about the records.

“Any attempt to impose criminal liability on a President or former President that involves his actions with respect to documents marked classified would implicate grave constitutional separation-of-powers issues,” Trump’s attorney Evan Corcoran wrote in a May 25 letter to a Justice Department official.

“Beyond that, the primary criminal statute that governs the unauthorized removal and retention of classified documents or material does not apply to the President,” Corcoran added. – Rappler.com