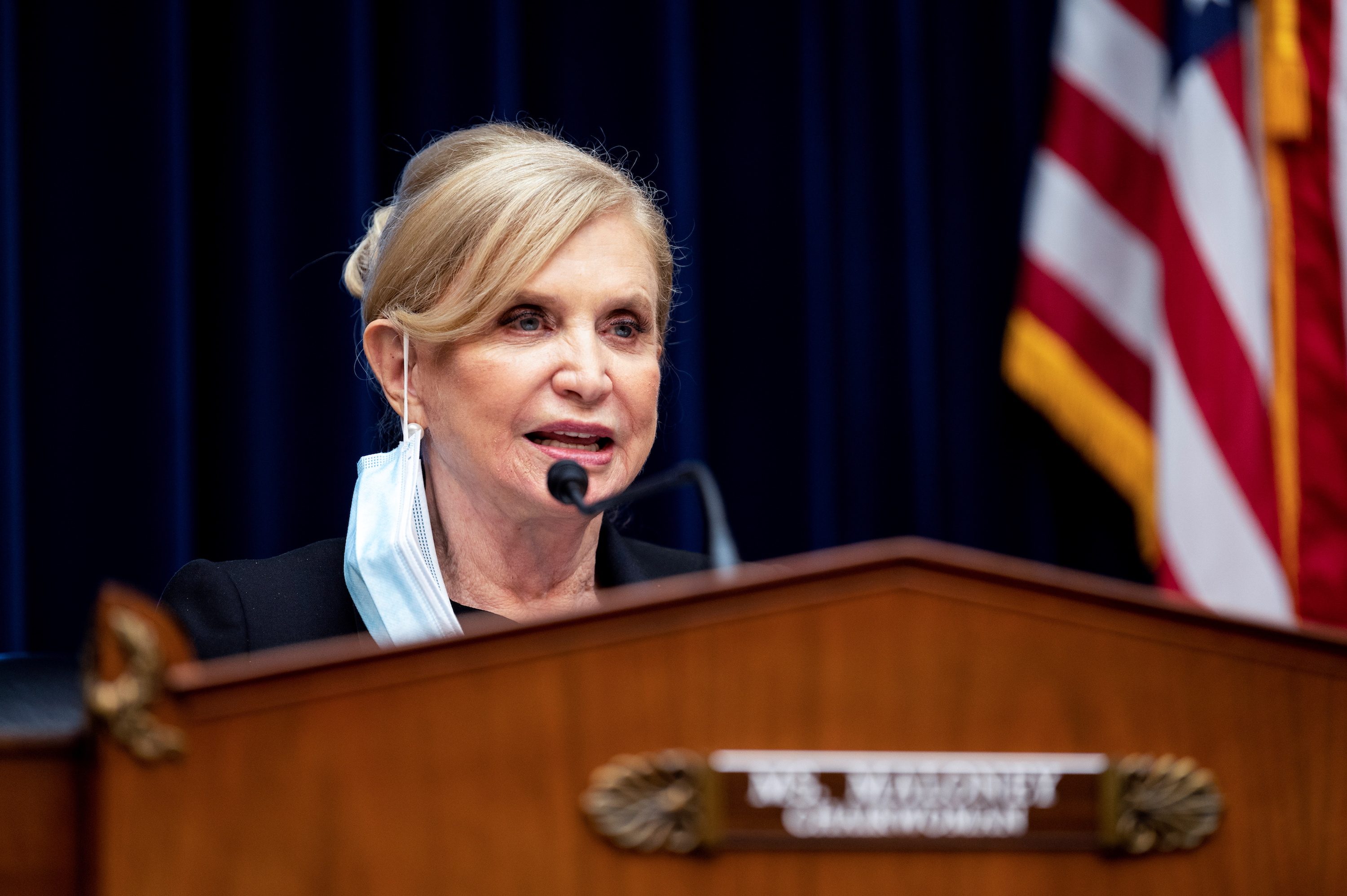 Chairwoman Carolyn Maloney speaks during a House Oversight and Government Reform Committee hearing to examine a Republican-led Arizona audit of the 2020 presidential election results in Arizona's most populous county, Maricopa, on Capitol Hill in Washington, US, October 7, 2021.

Facebook Twitter Copy URL
Copied
(1st UPDATE) 'We need to get to the bottom of the oil industry's disinformation campaign with these subpoenas,' says Democrat Carolyn Maloney, chairwoman of the House committee on oversight and reform

A US House committee will subpoena major oil company executives for documents on what company scientists have said about climate change and any funds spent to mislead the public on global warming, the head of the panel said on Thursday, October 28.

Democrat Carolyn Maloney, chairwoman of the House committee on oversight and reform, announced the subpoenas at the close of a hearing in which energy industry chiefs were grilled over climate.

“We need to get to the bottom of the oil industry’s disinformation campaign with these subpoenas,” said Maloney, who plans to go after documents from the companies and their trade groups about funding of “shadow groups,” public relations firms and social media companies.

The hearing was the first time members of Congress concerned about climate change questioned executives of top oil majors and trade groups under oath. Lawmakers said they had received some documents but not enough, and the committee expects its probe to last a year.

Appearing virtually before the panel were CEOs Darren Woods of ExxonMobil, Gretchen Watkins of Shell Oil, David Lawler of BP America and Mike Wirth of Chevron. The panel also heard from officials at BP America and the heads of the American Petroleum Institute (API) and Chamber of Commerce.

Representative Ro Khanna, a Democrat, told Reuters this week that the panel got some documents from former Exxon lobbyist, Keith McCoy, who was secretly recorded by environmental group Greenpeace, saying the company’s support of a carbon tax was a ruse, since the company believed the idea would never become law.

The six-hour hearing focused on what Democrats called Big Oil’s “disinformation campaign” to block climate action. It covered the period from the 1970s, when companies ignored their own research on climate risks of fossil fuels, to current advertising campaigns aimed at brandishing their green image.

Khanna said that while oil companies have started to improve their talking points, they have undermined these public statements by supporting lobbying groups that deny climate science or fight proposals to fight climate change.

“I don’t believe that you purposely want to be out there spreading climate misinformation but you’re out there funding these groups,” Khanna said.

The energy executives said more time is needed for a transition to cleaner energy. None of them said yes when Khanna asked if they would commit to an independent audit to verify that none of their funds were going to groups that deny climate science, or whether they would commit to pulling their memberships from API if the oil lobby group keeps fighting policies such as electric vehicle credits and methane fees.

Oil executives and trade group officials at the hearing tried to distance themselves from previous efforts to dismiss climate science, saying their views have evolved.

Woods and Chevron’s Wirth played up oil and gas as essential for operation of hospitals, schools and offices.

BP America’s Lawler and Shell’s Watkins talked about their recognition that climate change was a problem in the 1990s and about their current efforts to adapt their business models to add more renewable energy and cut emissions.

Representative James Comer, the panel’s top Republican, did not mention climate in his opening remarks. He and other Republicans sought to link the current energy supply crunch to President Joe Biden’s environmental policies, like cancelling the Keystone XL oil pipeline.

“The purpose of this hearing is clear: to deliver partisan theater for prime-time news,” Comer said.

The lone Republican witness, Neal Crabtree, a welder who lost his job after Biden canceled Keystone, said his main crisis was not climate change but paying his mortgage and food bills.

‘Setting the future on fire’

“One thing that often gets lost in these conversations is some of us have to actually live in the future that you all are setting on fire for us,” Representative Alexandria Ocasio-Cortez, 32, told the executives, all older than 50.

The United Nations this summer released a report saying immediate and large-scale action is needed to reduce emissions or the average global temperature is likely to reach or cross the 1.5-degree Celsius (2.7 degrees F) warming threshold within 20 years.

The committee contrasted the industry’s advertising claims of support for the 2015 Paris climate agreement with the scant funding they have given.

It released an analysis that Exxon’s lobbying disclosures since 2015 showed only one instance of lobbying on the Paris Agreement, and none on any of the 28 bills related to the pact.

“Only 0.06% of Exxon’s 1,543 total instances of legislative lobbying since 2015 has been devoted to the Paris Agreement or related legislation,” the analysis said.

Woods emphasized Exxon’s investments in carbon capture, a technology to capture emissions for burial underground or to pump them into aging oilfields to squeeze out more crude.

On the requested documents, Chevron said the company has been working to collect and produce them.

Exxon said it has produced nearly 130,000 pages of documents including internal emails. API said has been working with the committee “consistent with our right to associate and engage in free speech.”

The other companies and the Chamber did not immediately respond to requests for comment.

Chevron spokesperson Braden Reddall said the company has been working to collect and produce the requested documents. The other companies and trade groups did not immediately respond to requests for comment about the subpoenas. – Rappler.com