Uvalde begins to bury its dead in wake of school massacre 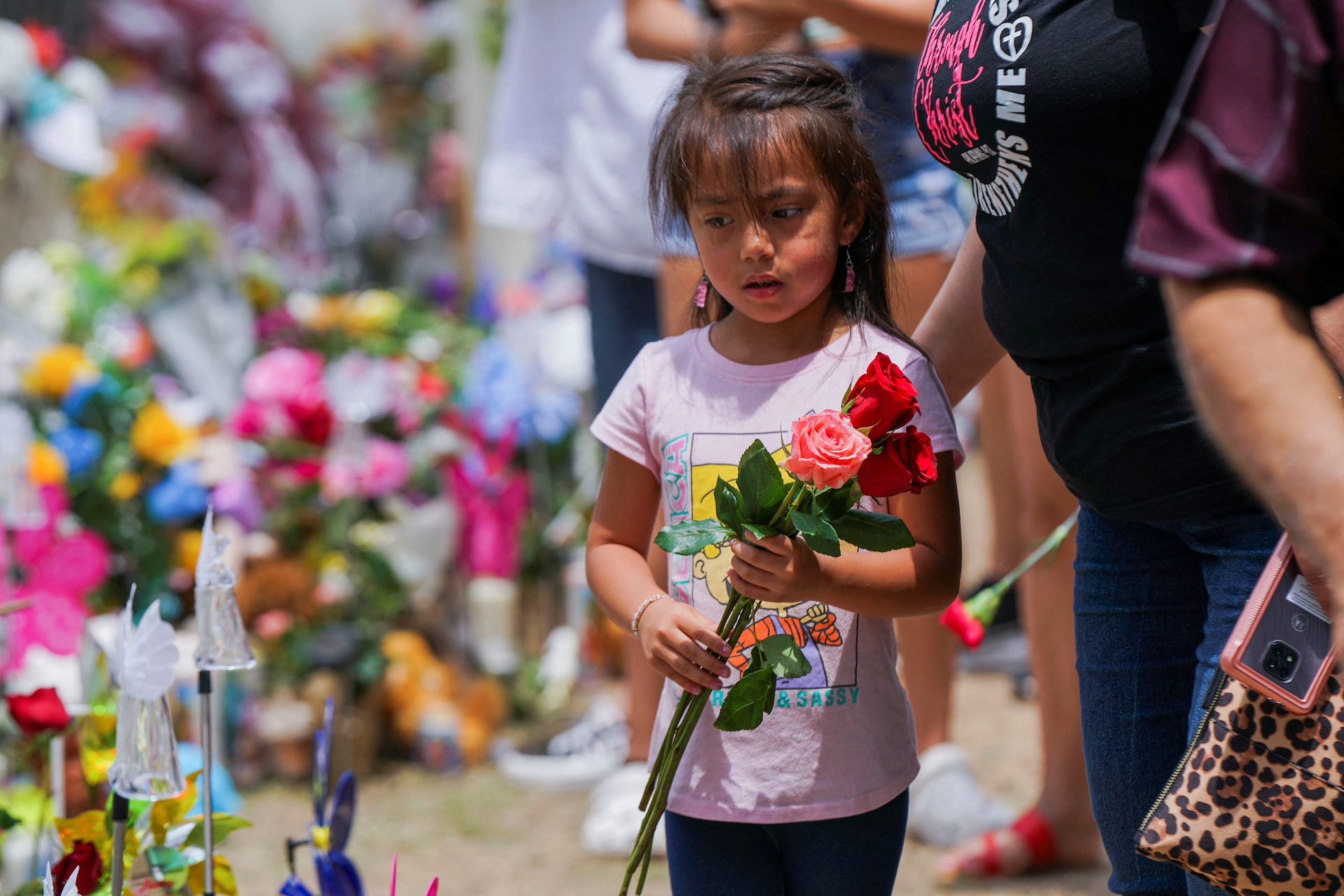 Adamari Hernandez, 5, from San Antonio, holds flowers to put at a memorial site to remember the victims of the deadliest U.S. school mass shooting in nearly a decade, resulting in the death of 19 children and two teachers at Robb Elementary School, in Uvalde, Texas, U.S., May 30, 2022. REUTERS/Veronica G. Cardenas

Facebook Twitter Copy URL
Copied
(1st UPDATE) Several large media outlets in Texas, including the Dallas Morning News and the Texas Tribune, observe 21 minutes of silence – one minute for each of those who died in the attack

TEXAS, USA – The grieving Texas town of Uvalde began laying to rest the 21 children and teachers shot to death at an elementary school one week ago, with funerals scheduled on Tuesday, May 31, for a pair of slain 10-year-old girls as Governor Greg Abbott issued a disaster declaration for the city.

According to obituaries on the websites of Uvalde’s two funeral homes, Maite Yuleana Rodriguez was an honor student who loved learning about whales and dolphins and dreamed of becoming a marine biologist. Amerie Jo Garza was remembered as sweet, sassy and funny, and loved swimming and drawing.

Amerie’s funeral was set for Tuesday afternoon at Uvalde’s Sacred Heart Catholic Church. Services for Maite were scheduled in the evening at a funeral home.

The two girls were among 19 students, aged 9 to 11, who were killed last Tuesday along with two teachers by an 18-year-old gunman who burst into their fourth-grade classroom at Robb Elementary School and opened fire with an AR-15-style semiautomatic rifle.

Abbott said his disaster declaration was designed in part to “accelerate all available state and local resources to assist the Uvalde community” after the massacre, the deadliest US school shooting in nearly a decade.

Several large media outlets in Texas, including the Dallas Morning News and the Texas Tribune, observed 21 minutes of silence on Tuesday – one minute for each of those who died in the attack.

“So many of us are grieving for the city of Uvalde, for the moms and dads and sisters and brothers, for husbands and daughters of those who will never again hear the laughter of their loved ones,” KXAS-TV, an NBC affiliate in Dallas, said on its website.

A series of funerals has been planned over the next two weeks in Uvalde, a town of 16,000 predominantly Latino and Roman Catholic residents, 80 miles (130 km) west of San Antonio.

Among those to be memorialized are the two teachers who died, Eva Mireles, 44, and Irma Garcia, 48. Garcia’s husband, Jose Garcia, 50, died of a heart attack two days after the shooting. A joint funeral is planned on Wednesday, June 1, for the couple, who met in high school and had four children.

“Our focus on Tuesday is on our families who lost loved ones. We begin burying our children,” Uvalde Mayor Don McLaughlin said in a statement announcing cancellation of a scheduled city council meeting.

Listed on the agenda of the meeting had been the swearing-in of Pete Arredondo, chief of the Uvalde Consolidated Independent School District police department, as a new city council member.

Arredondo has come under sharp criticism for his role as on-scene commander of the police response to the shooting. According to state public safety officials, it was Arredondo who decided against immediately storming the classroom where the shooter opened fire.

As many as 19 local law enforcement officers waited outside the classroom for nearly an hour as frantic school children cowering inside repeatedly called 911-emergency pleading for help, authorities said last week. A US Border Patrol-led tactical team ultimately burst in and killed the gunman.

Videos have emerged showing the chaotic scene outside the school where desperate parents gathered, urging police to enter the building sooner. One video, shot by an onlooker and aired on CNN on Tuesday, picked up radio traffic of a child’s call to police.

“Are you injured?” an adult is heard asking the caller.

“I got shot,” the child replies before the audio becomes unintelligible.

As the town grieved, the nation once again grappled with whether to tighten federal and state gun laws. Texas law allowed the shooter to purchase an AR-15-type weapon on his 18th birthday, a week before the massacre.

The gunman also bought hundreds of rounds of ammunition and a second rifle in subsequent days.

Many Democrats, including US President Joe Biden, who traveled to Uvalde on Sunday, May 29, have called for new restrictions such as a ban on assault-style weapons and universal background checks for all firearms purchases.

In New York, Democratic political leaders said on Tuesday 10 bills to toughen gun laws had been introduced in the state legislature, including one to raise the minimum age for buying semiautomatic rifles to 21.

Republicans have successfully held off tougher firearms control and in many states have relaxed gun regulations in recent years, saying law-abiding citizens have a constitutional right to bear arms.

Republican Arkansas Governor Asa Hutchinson said he was willing to discuss raising the minimum age to purchase a semiautomatic rifle from 18 to 21.

“I think you’ve got to be able to talk about the AR-15 style weapons. And whether that’s an 18 or 21 age. You have to at least have a conversation,” Hutchinson told CNN on Tuesday. – Rappler.com