US mobilizes to vaccinate its youngest vs COVID-19 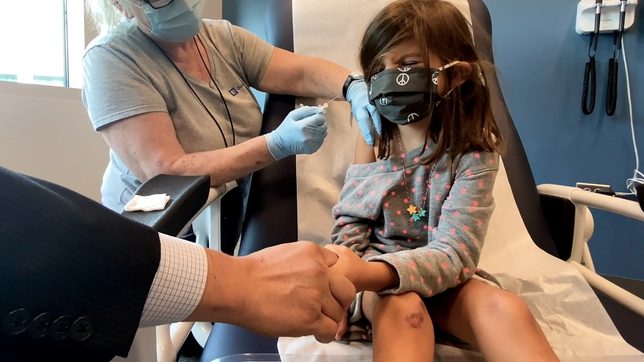 Bridgette Melo, 5, reacts as she holds the hand of her father, Jim Melo, during her inoculation of one of two reduced 10 ug doses of the Pfizer/BioNtech COVID-19 vaccine during a trial at Duke University in Durham, North Carolina, on September 28, 2021 in a still image from video.

Facebook Twitter Copy URL
Copied
While some vaccinations will be given as soon as Wednesday, November 3, shots will be more widely available starting the week of November 8

The United States can start administering COVID-19 vaccines to children aged 5 to 11 as soon as Wednesday, November 3, with roughly 28 million school-age kids now eligible for the shots that provide protection against the illness.

On Tuesday, November 2, the US Centers for Disease Control and Prevention recommended the Pfizer Inc/BioNTech SE shot for broad use in that age group after a panel of outside advisers voted in favor of it.

While about 58% of Americans are fully vaccinated against COVID-19, children under 12 have not yet been eligible for shots. The Delta variant of the virus has led to thousands of children being hospitalized and they make up 25% of US cases.

The vaccine, shown to be more than 90% effective at preventing symptomatic infection in children, offers an avenue for fewer quarantines or school closures and more freedoms.

“I think it’s going to make the issue of schools much easier, much safer,” White House chief medical adviser Dr. Anthony Fauci said in an interview with CNN on Wednesday.

The US government is sending 15 million COVID-19 vaccines for children to distribution centers around the country, and while some vaccinations will be given as soon as Wednesday, shots will be more widely available starting the week of November 8.

The shots will be available at pediatrician’s offices, children’s hospitals and pharmacies. The big national pharmacy chains, Walgreens Boots Alliance and CVS Health, will have them starting this weekend.

The federal government has purchased 50 million doses of Pfizer’s vaccine to be deployed, US officials said this week.

Pfizer’s shot for younger children contains a lower 10-microgram dose of vaccine than the 30 micrograms given to those aged 12 and older.

The US Food and Drug Administration authorized the Pfizer/BioNTech vaccine for children aged 5 to 11 years on Friday. October 29, So far, only Pfizer’s shot has been authorized for use in the United States for those under the age of 12. A few other countries, including China, are already vaccinating children

Moderna Inc said on Sunday, October 31, it would delay filing its request for an emergency use authorization for its vaccine for children aged 6 to 11 while the FDA reviews safety data in connection with its application for 12- to 17-year olds.

The states with the highest adult vaccination rates against COVID-19 are also preparing bigger pushes to get children inoculated than states where hesitancy remains strong, potentially widening the gaps in protection nationwide, public health officials and experts said.

New York Governor Kathy Hochul on Tuesday announced a new vaccine incentive aimed at kids that will offer two tickets for events at Brooklyn’s Barclays Center for getting vaccinated at the arena.

Still, it remains unclear how parents will react. Many people who have been vaccinated themselves are more divided over whether or not to vaccinate their own younger children given that severe COVID-19 is much less common for them.

While the Pfizer/BioNTech vaccine has been used in more than 400 million people, there is no long-term data yet for its use in adults or children.

California, New York and Washington state, all led by Democratic governors who have promoted vaccination and mask-wearing during the pandemic, are setting up mobile sites and high-volume vaccination clinics for children, spokespeople for the public health departments of those states said.

California has also mandated that school-age children get a COVID-19 vaccine once their age group is eligible, a measure being considered in New York and Washington.

Republican state governors have largely resisted measures such as mask mandates or vaccine requirements in workplaces, schools and public venues. More than a dozen states, including Florida and Texas, have tried to block schools from imposing such requirements themselves.

“The best-case scenario would be everyone…did their best to get the age group vaccinated because it’s going to protect their younger siblings, their older relatives and people who just don’t respond well to these vaccines,” said Pamela Zeitlin, the chair of the department of pediatrics at National Jewish Health, a hospital in Colorado. – Rappler.com