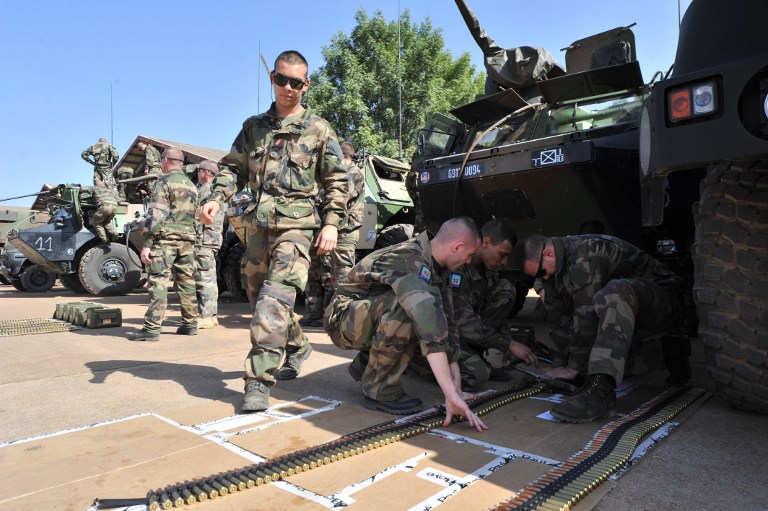 French soldiers prepare ammunitions on January 16, 2013 at a military airbase in Bamako before his regiment's deployment as part of the u0022Servalu0022 operation against Islamists occupying northern Mali.

The emergency summit of the Economic Community of West African States (ECOWAS) regional bloc also called on member states and Chad, which has pledged 2,000 troops, to put words into action without haste.

Only about 100 African soldiers of a planned 5,800 African force have so far reached Mali, while France said Saturday that 2,000 French soldiers were now on the ground after Paris launched an offensive a little over a week ago to stop Islamists swooping down from the north, which is under their control.

A statement at the end of the Abidjan meeting called on the United Nations "to immediately provide financial and logistical backing for the deployment of MISMA", the African force.

African troop deployments have always been long-drawn affairs. A diplomat, speaking on condition of anonymity, said: "The truth is that ECOWAS has no money to transport its troops".

French Foreign Minister Laurent Fabius, who also attended the summit, said it was time for the Africans to take charge of the task of halting the extremist advance "as soon as possible".

"It is vital that the maximum number of countries worldwide contribute" to the effort, he said, speaking ahead of a donors' conference in the Ethiopian capital Addis Ababa on January 29.

"France was obliged to intervene very, very rapidly, otherwise there would have been no more Mali," Fabius said. "But it is well understood that it is the Africans that must pick up the baton."

Ivory Coast President Alassane Ouattara, who is also the current head of ECOWAS, said it was high time others did their bit to help end the crisis.

"The hour has come for a broader commitment by the major powers and more countries and organizations to the military operations to show greater solidarity with France and Africa," he said.

"We must speed up the re-establishment of Mali's territorial integrity with the logistical support of our partners ... (and) go beyond our current deployment numbers," Ouattara said, warning that the crisis threatened to destabilize the region.

Malian soldiers, backed by French troops and air power, retook the key central town of Konna on Thursday from Al-Qaeda-linked rebels who had swooped down more than a week ago and threatened the capital Bamako.

There were conflicting reports on another town, Diabaly, which the Malian army claimed was recaptured but the French defense ministry effectively denied this.

Mali's interim President Dioncounda Traore, in an address on state television late Saturday, vowed to rout the Islamists who he said wanted "to impose a medieval ideology on our people".

"This war will be without doubt costly and tiring," he said but added: "We will win this war in the name of civilization and democracy."

Traore also appealed to other countries to back the drive against the militants by extending "logistical and any other kind of aid to create a region that is rid of terrorism, drug trafficking and organized crime".

The French presence has been a lifeline for Mali's ill-equipped and demoralized soldiers, struggling to fight an amalgam of Islamist and Tuareg rebel groups.

The Malian army proved no match for Tuareg separatist rebels who took them by surprise when they relaunched a decades-old rebellion in January last year.

As anger rose over their defeats, a group of soldiers overthrew the government in Bamako in a disastrous March coup, which only made it easier for the Tuareg and their new Islamist allies to seize the vast arid north. - Rappler.com