Surfing in the city MANILA, Philippines – One would think that in a country composed of 7,000-plus islands, we’d be teeming with homegrown surfers and attracting international ones to surf spots.

“We have too many surf spots!” says Paolo Soler. “If you look at any coastline in the country that’s exposed to the West Philippine Sea and the Pacific Ocean, there will be waves.”

Paolo runs the Philippine Surfing Academy (PSA), a surf school based in Metro Manila. He’s also been surfing in the country for 15 years now.

“Back in 1997 when I first started surfing, the local surfing industry was virtually non-existent,” he recalls. “Even if there were already surf spots where foreigners have decided to settle, there were only a handful of us in Metro Manila who would actually venture out to La Union to try to pick up this sport. And when I say a handful, we didn’t even know each other. I thought I was the only one!” Of course, Paolo wasn’t the only surfer from the city, and over time, the number of surfers increased, surfing communities started growing, resorts got built, more competitions got staged. And noted, these days, are a lot more urbanites loading up surfboards on their cars to head out to the ocean.

For Paolo, this means that local surfing industry is progressing. It was exactly the kind of environment he’s been waiting for.

“Surfing has always been my passion,” he says. “I always wanted to get into a surf business But something they taught us in business was to study your business plan and if it was feasible, go for it; if it wasn’t, then, no. When I went to Bali, Indonesia and I witnessed for myself the surfing industry there, I realized there was a big, big potential for the industry to grow here in the Philippines.”

In 2008, as Paolo fretted over his business plan for his dream surf business, he chanced upon a resort with a curious feature: a wave pool.

“This could be something,” he thought.

That “something” developed into the first surfing program to utilize the wave pool technology.

“It was purely by luck and by chance.” Paolo found the wave pool while checking out the facilities at Club Manila East for a company team building session. “Club Manila East’s wave pools work perfectly for surfing – the waves break like an actual surf break, but just more consistent. The size, though not that big, is perfect for beginner to intermediate level surfing.”

It meant, more than anything, that one can now surf without going out of town.

The more natural thing to do, one would expect, is to drive out to the ocean and learn to surf fully exposed to the elements. After all, that’s how it’s been done for decades.

According to Paolo, the ideal scenario for a beginner learning to surf include a body of water with no currents, no dangerous marine sea creatures, with waves include having waves not exceeding two to three feet and waves that are perfectly peeling, that is, waves the break evenly and gently.

This is certainly not the case in the ocean. The wave pool changes all that.

“In the wave pool, since everything is man-made and controlled by a machine and a computer, we can create identically-shaped waves that work perfectly for beginners,” explains Paolo.

“Surfers have this saying: Respect the ocean and nature,” Paolo shares. “It means don’t underestimate nature. Don’t take it for granted. Anything can happen. So you always have to respect that aspect of the sport.”

This unpredictability of nature makes the ocean a challenging learning venue for new surfers. At worst, it becomes a disheartening experience.

Surfing involves more than just balancing on a board: there’s paddling out, waiting for the right wave, popping up and standing on the board. It can be quite overwhelming to learn it all at once. And the waiting for all the conditions to come together perfectly can take a lot of time.

The wave pool changes all that.

A wave pool surfing lesson is timed for two hours in the pool, broken into four sessions of 20-minute cycles with 10-minute breaks in between. In those couple of hours, a surfer can get as much as 40 waves. That’s about eight hours worth of wave riding in ocean time – on a good day.

“At the wave pool, everything is controlled,” explains Paolo. “There is no distraction. No jellyfish, no currents. We’ve had students progress so much with their surfing skills here. When you go to the ocean and you don’t know anything, and you’re dealing with currents and all these factors that come with being with nature, it just slows everything down.”

PSA’s wave pool lessons dare to break even a few more barriers. Because safety is foremost on the agenda, even non-swimmers can be taught to ride a wave and children as young as 4 years old can get their first lessons in stoke.

Heading out to sea

The end goal, still, is to catch and ride ocean waves.

But before that, whether beginner or advanced, a surfer will do well to maximize training in the wave pool. Paolo claims, “Our wave pool lessons have proven to be the safest, easiest and most innovative method in the field of surfing education.”

The consistency of waves allows a student to lock down the fundamentals of surfing much more quickly than out on the ocean: where to position themselves on the surfboard, paddling position and posture, proper riding position, proper popping up.

“When you’re done with learning the basics at the pool, everything becomes a lot easier to pick up at the ocean,” Paolo guarantees.

The wave pool is beneficial to the advanced surfers as well. Here, they are able to practice paddling and surfing, building on their skills and strength, all which come in handy when it’s time for a surf trip. It works like, as Paolo puts it, “the ultimate surfing treadmill”.

It’s hard not to see how enthusiastic Paolo is about surfing and spreading his love for the sport as far and wide as possible. Making it convenient and easy via lessons in the city is one thing, but it’s only part of his surfing agenda.

“We’re on a big mission,” he stresses. “I think surfing is just one of those natural human activities that will definitely become popular in a country that has good waves.”

He looks at the industry with hope.

“If you go to La Union, you’re going to think you’re in Australia because they just fixed everything up so properly. They have a surf lifesaving system. You’re going to see flags on the beach that indicate the surfing area and the swimming area, whether you’re allowed to go swimming in the ocean, or the beach is closed. It’s just phenomenal. And for it to happen to a simple location like La Union is amazing. It’s happening too in Baler (Aurora) and Daet (Camarines Norte).”

Globally, the country is already starting to get recognized too, little by little, for its surf spots. Cloud 9 in Siargao Island, which hosts an annual international surfing competition, was recently listed as the #8 best surf spot in the world.

“That says a lot for the Philippines, a very young surfing industry still in its industry stage,” according to Paolo. “The truth is, Siargao is just the tip of the iceberg.”

He adds, “The beauty of surfing is that it’s just one of those special sports that contributes so much to tourism. And I think it’s because of the lifestyle that surfers exhibit. Surfer’s lifestyle involves traveling to different surf spots. Surfers don’t want to surf the same wave or the same surf break all the time. He’s going to want to travel the world, to try to experience the different kinds of surf spots and meet the different surfers and meet different people.” – Rappler.com 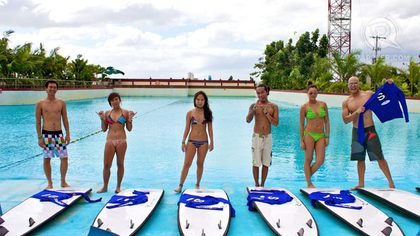