Dec 10, 2015 2:20 PM PHT
Agence France-Presse
Facebook Twitter Copy URL
Copied
The chick, hatched at a conservation center on December 7, is the first in two years and the 26th in 23 years 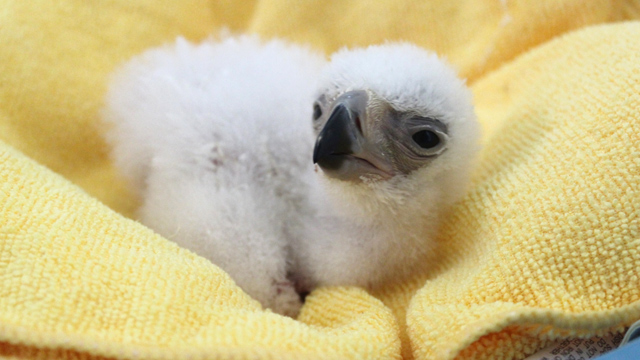 MANILA, Philippines –A monkey-eating eagle has been hatched in captivity in the Philippines, boosting the critically-endangered giant bird’s fight against extinction.

Found only in the rapidly vanishing tropical rainforests of the Philippines, the meter-long (3.3 foot) raptor gets its name from its diet of macaque monkeys and other small animals that share its habitat in Mindanao, the country’s main southern island.

The chick, hatched at a conservation center on December 7, was the first in two years and the 26th in 23 years, Philippine Eagle Foundation curator Anna Mae Sumaya said.

Barely a week old, the “very active” hatchling can already lift its head and responds to bird calls, Sumaya said.

“This chick will make it.”

Also called the Philippine eagle, the bird is famed for its elongated nape feathers that form into a shaggy crest. Its two-meter wingspan makes it one of the world’s largest eagles.

“This gives us hope that we can somehow supplement the Philippine eagle population,” Sumaya told AFP.

The raptor is found nowhere else except the Philippines, where it is the country’s national bird.

There are about 600 monkey-eating eagles in the wild and 34 others, including the hatchling, are kept in massive cages at the centre.

The Swiss-based International Union for the Conservation of Nature lists the species as “critically endangered”, due to hunting and the depletion of its habitat.

Gunshots account for nine in every 10 Philippine eagle casualties according to the foundation, which has also warned it was running out of safe places to release the captive-bred birds when they mature.

The monogamous eagles breed only once a year, with each pair producing only one egg every mating season.

There are 4 breeding pairs in the conservation centre. Two other eggs laid during this year’s mating season were infertile and did not hatch, Sumaya said. – Rappler.com