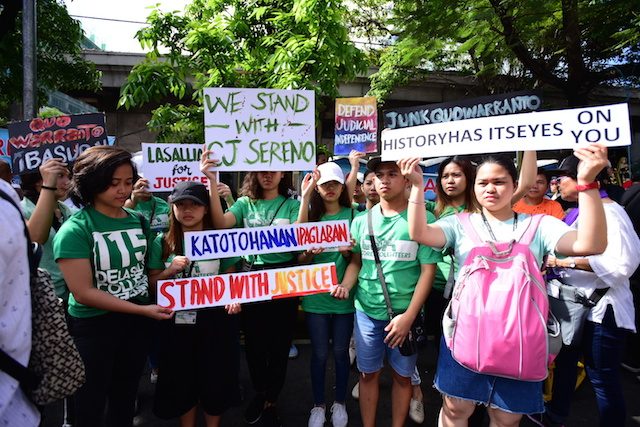 MANILA, Philippines (5th UPDATE) – Senators on Friday, May 11, slammed the Supreme Court vote ousting Chief Justice Maria Lourdes Sereno, and called the decision a “direct stab” to the heart of the Constitution.

“This is a black day for justice and the rule of law. The Supreme Court has fallen, and fallen hard in the eyes of the public,” Senator Risa Hontiveros said in a statement shortly after media reported the supposed 8-6 Court vote in favor of the quo warranto petition against Sereno.

“By giving its nod to an obviously unconstitutional petition, the high tribunal has surrendered its judicial independence and integrity to the whims of President Duterte, and subverted altogether our constitutional process of impeachment,” Hontiveros added.

The senator said the decision supposedly reflected the inability of some justices to separate personal issues from their official duties.

“The justices’ failure to rise above their personal issues has paved the way for the rise of a black dawn in the judiciary. The Supreme Court has opened the floodgates for the removal in the future of other impeachable public officials through arbitrary means and for whimsical reasons. It is a direct stab to the heart of our Constitution,” Hontiveros said.

Of the 8 justices who voted in favor of the petition, 6 were the subjects of Sereno’s  petitions to inhibit in the case: Associate Justices Teresita Leonardo de Castro, Diosdado Peralta, Lucas Bersamin, Francis Jardeleza, Noel Tijam, and Samuel Martires.

Senate President Aquilino Pimentel III asserted the supremacy of the Senate in the removal of an impeachable officer like Chief Justice Maria Lourdes Sereno, and urged the High Court to review its decision to grant  petition.

The president of the ruling PDP-Laban said that under the Constitution, the Chief Justice is an impeachable official “who can be removed only after impeachment by the House and conviction by the Senate.”

“The reputation and esteem of this present Supreme Court will now rise or fall on the basis of the soundness or unsoundness of this controversial decision upholding a very unusual remedy to oust a sitting Chief Justice,” said Pimentel, a bar topnotcher.

“Let us all uphold the RULE OF LAW. The people must be given time to review this decision. And the Supreme Court itself must also take the time to review its own decision,” he added.

Pimentel said that just as High Court is “not supreme” on all matters, it can also make mistakes.

“If the Supreme Court is not supreme in everything, then it is also not infallible in everything. The respondent Chief Justice must be given the opportunity to file a Motion for Reconsideration,” he said.

“I maintain that you can only remove the Chief Justice thrrough impeachment. I disagree with the majority decision of the Supreme Court. Bad precedent. The decision in effect reduced the powers of both houses of Congress,” Recto said.

Senator Antonio Trillanes IV accused the 8 justices who favored the petition of “killing” the justice system.

“It is now the darkest hour in our democracy. The Supreme Court, which is supposed to be the cradle of our fragile Constitution, is the same body that killed it. Those SC justices who committed this heinous crime against our justice system must not and will not go unpunished,” he said.

Hontiveros described the SC decision as “a slap in the face of the Senate.”

“With this decision, the Senate is robbed of that power and denied the obligation to fulfill its constitutional duty. There is a clear attempt to relegate the Senate to the political sidelines,” Hontiveros said.

Senator Joel Villanueva also expressed dismay over the decision. “Again, I stand with our Constitution that the only means to remove the CJ is through impeachment,” he said.

Senator Paolo Benigno Aquino IV said in Filipino that with the SC ruling, “the public was denied the right to know and scrutinize the case.”

Senator Juan Edgardo Angara said the 8-6 vote on the quo warranto petition reflected a “divided court” which “means the ruling may not be a stable one and may be subject to revision going forward.”

“I do not agree with the decision because impeachment is the only constitutional route for removal of a CJ but acknowledge that the Court has spoken,” he added.

Angara expressed hope that “wisdom and sobriety” would prevail, in the event that the ruling becomes final and excutory.

“The ripple effect of the decision may be felt in the coming months and years. I pray that wisdom and sobriety prevail in the future for the good of the country and our people,” he said.

Senator Joseph Victor “JV” Ejercito viewed the ruling “as an encroachment on the exclusive right of Congress to impeach and try impeachable officers.”

“Regardless of one’s position with respect to the charges against the Chief Justice, what is alarming is the blatant disregard of the highest law of the land,” Ejercito said.

The senator urged the people to “remain calm” in the face of the development. “Despite this setback let us not lose our confidence in our democracy. Our institutions and our people have, on many occasions, demonstrated their resiliency in the face of assaults on our democracy,” he said.

Senator Panfilo Lacson said the ones who stand to gain the most from the decision are the “incompetent lawyers” who would have been fully exposed if the impeachment trial pushed through.

(The biggest “winners” in the SC decision are the incompetent lawyers who would have been prepared to show off their stupidity at the impeachment trial that will not happen because the House is not likely to transmit the Articles of Impeachment to the Senate.)

Senator Francis Pangilinan said in another statement that the SC justices who favored the quo warranto petition “disrespected” the Constitution, as he urged the people to show their displeasure with the decision.

(The Supreme Court majority disrepsected the Constitution….A motion for reconsideration should be filed. The people should show the Court that the vote is wrong and unacceptable.)

He said in Filipino what the Court vote showed is that “numbers and power overpower respect for the law,” and indicated “concern” that the impeachment would not prosper in the Senate.

(They feared that they may not have enough votes in the Senate so they forced their garbage argument. This issue does not stop here. Congress would assert its duty and obligation under the Constitution which states that the Chief Justice can only be removed through impeachment.)

“The Supreme Court decision ousting Chief Justice Maria Lourdes Sereno is probably the greatest travesty of justice committed by the High Court since the 1973 case of Javellana v. Executive Secretary, where the Supreme Court then ushered in the era of the Marcos Dictatorship,” she said in a dispatch from her jail dell in Camp Crame.

“This one ushers in another era of another dictatorship as the Court once again puts an end to the last gasps of a dying constitutional democracy,” De Lima added.

The senator, a former justice secretary, said that “no amount of legal sophistry and gobbledygook can hide the fact that the Court not only violated the constitutional provision that members of the Court can only be removed by impeachment.”

“More than that, the decision in effect proclaimed the Supreme Court as supreme over the Constitution itself. Beyond interpreting the Constitution, the Court is now the editor of the supreme law, changing it whenever the Court deems it to be so convenient under the guise of interpretation” she said.

De Lima shared the view of fellow critics that the justices who favored the petition “destroyed” the High Court and the rest of the judiciary.

“Nothing will now stop Duterte from finishing off the rest of our democratic institutions,” she said.

“St Thomas More said that the devil can be stopped so long as the laws of the land are not entirely mowed down, because it is the law that stands between us and the devil. Sereno was not given the benefit of law. The Court has cut down the supreme law of the land just to remove her. We might have just witnessed the cutting of the last law that still stands between us and the devil,” De Lima added.

Senator Sherwin Gatchalian said that by granting the quo warranto petition, the Court “has circumvented this crystal-clear constitutional mandate of Congress, subverting in the process the paramount tradition of separation of powers that lies at the very heart of our republican system of government.”

He expressed hope the Court would “come around” when it tackles the motion for reconsideration that the Sereno camp said it would file.

“Sereno will certainly file a Motion for Reconsideration, which will give the Court the chance to revisit its ruling. I am hopeful that the honorable members of the Court will come around and recognize the ongoing impeachment proceedings in the House as the exclusive legal means available to prosecute Sereno’s ouster,” Gatchalian said.

He said that if the House transmits the articles of impeachment to the Senate and the latter is convened as an impeachment court, the Senate would handle the impeachment trial “with the utmost impartiality, probity, and integrity.”

“The Senate will not hesitate to remove her from office if she is found guilty of the serious charges she is facing. What is important here is that Sereno be given her day in court, and that day must come before the Senate acting as an Impeachment Court, not the Supreme Court,” he said.

Senate Majority Leader Vicente Sotto III, for his part, said everyone should respect the Court’s decision as it is the “supreme” interpreter of the Constitution.

“The Supreme Court is the highest interpeter of the Constitution and the laws. We respect its decision. To do otherwise is to make our personal opinion higher than what we regard as supreme,” Sotto said. – with reports from Camille Elemia / Rappler.com