‘He followed the script!’: #SONA2018 reactions, hugot, and memes 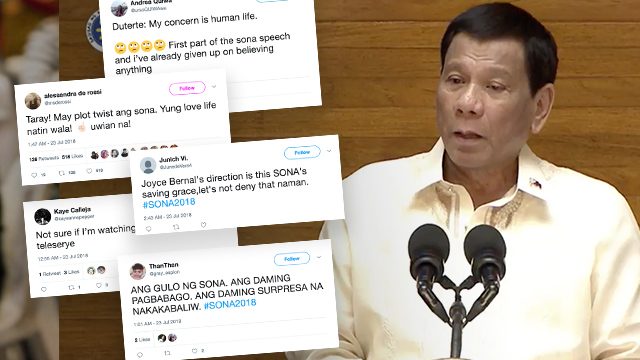 Facebook Twitter Copy URL
Copied
From funny tweets to direct reactions to the president's speech, here are some tweets that highlight netizens' takes on the 2018 SONA

MANILA, Philippines – It’s that time of the year again!

President Rodrigo Duterte once again delivered his State of the Nation Address (SONA) on Monday, July 23, and as always, the Twitterverse was abuzz with reactions and memes.

From funny tweets to direct reactions to the president’s speech, here are some tweets that highlight netizens’ takes on the 2018 SONA:

Who's up for the challenge? #SONA2018 pic.twitter.com/wd1kzTWWAk

Last year’s SONA drinking game is back, but netizens seem to have found healthier alternatives: a SONA bingo game and a SONA workout challenge.

Now netizens could test just how much they already know about the president without getting a dreaded beer belly.

Burn those carbs from the 2018 SONA Drinking Game

When it comes to SONA fashion, Senator Nancy Binay proved to be an annual favorite by netizens, who were waiting to see what she has to wear this year.

What really excites me today is
to see @nancybinay photos and memes.  #SONA

But the senator seemed to have already learned from past SONAs and wore a simple powder blue gown, impressing netizens.

You continue to impress me, Ma’am Nancy Binay. Simple is indeed beautiful. Very elegant and sophisticated. Keep it up po Madam! https://t.co/kbW4OjGYWC

Well, not all netizens:

Just before the SONA, netizens also noticed this glaring spelling error on the government’s accomplishment report:

Word of the day: administation pic.twitter.com/rxjpU4GgnQ

Netizens also wonder, even in the SONA, does Filipino time apply?

Of course, an event as big as the SONA wouldn’t be complete without ‘hugot’ lines from Filipino netizens with too many feels.

Reactions to the president’s speech

Beyond ‘hugot’ and memes, however, netizens also went online to express their thoughts as they listened to the president’s speech.

Critics of the president online were quick to react to the president saying that his concern is “human lives,” not “human rights.”

So apparently he's starting this with a futile justification of his bloody drug war. He says, "Your concern is human rights, mine is human lives." What of the lives of the 6,542 people his administration's campaign has killed? The 70-something youth who are casualties? #SONA2018

"Your concern is human rights,

mine is human life."

ANO DAW? Lol. A life without exercising its "rights" is not purposeful at all; it is mere breathing.

OUR CONCERN IS HUMAN RIGHTS, RIGHTS TO LIVE IS A PART OF HUMAN RIGHTS- you can’t say that your concern is human life IF YOU’RE LITERALLY THE ROOT OF THE ABUNDANCE OF DEATHS IN THIS COUNTRY.
PEOPLE ARE LITERALLY FIGHTING FOR THOSE WHO YOU TOOK THE RIGHTS OF, DUTERTE. #SONA2018

Many were also surprised that the president, known for preferring ad-lib speeches, read a prepared speech for most of his address.

Let's commend #PGong for following the script for #SoNA2018. I just wish he mentioned when will the 3rd telco be available. Or what he's doing about #MMtraffic

We have plummeted too low down the hell hole, that we are actually amazed that our President is following his script.#UnitedPeopleSONA #SONA2018 #SONAlokoNa

Huh
Duterte hasn't cussed yet
This is surreal#SONA2018

What are your thoughts on the president’s speech? Let us know in the comments below! – With reports from Annabella Garcia/Rappler.com

Annabella Garcia is a Rappler intern.