Oct 15, 2018 12:02 PM PHT
Mara Cepeda
Facebook Twitter Copy URL
Copied
(UPDATED) Declaring he's not the final arbiter in the siblings' squabble, ex-vice president Jejomar Binay says it's the 'people of Makati' who will decide who's worthy to lead the city 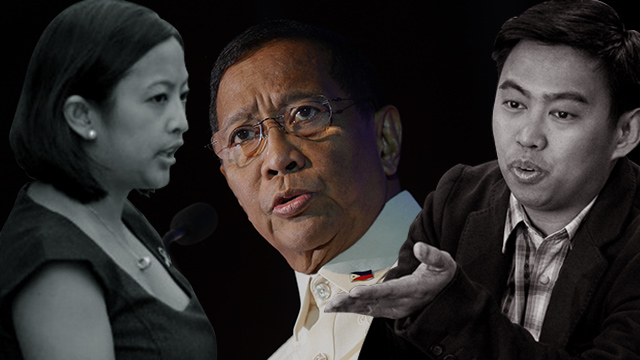 MANILA, Philippines (UPDATED) – The Binay vs Binay battle for Makati City mayor is on, gauging from the statement of the patriarch on Monday, October 15.

Former vice president Jejomar Binay said he has decided not to intervene in the rivalry of his two children for the mayoral race in Makati City, their family’s stronghold.

The family patriarch said he “respects” the decision of his only son and namesake Jejomar Erwin “Junjun” Binay Jr to go head to head with his older sister and reelectionist Makati Mayor Abigail Binay Campos in the 2019 elections.

(I cannot decide who is worthy to be local chief executive. The people of Makati will decide.)

The former vice president said Abby will be running under the United Nationalist Alliance (UNA), the same party Binay formed during the 2016 presidential elections, where he ran but lost to then-Davao City mayor and now President Rodrigo Duterte. Binay is currently UNA’s chairman while his eldest daughter, Senator Nancy Binay, is the party president.

Both have not filed their certificates of candidacy though.

Binay said they have agreed that during the campaign period, Abby and Junjun will only be discussing their respective platforms. The family agreement was for his warring children to avoid throwing hurtful statements at each other.

(They will tell their leaders and supporters to be noble and calm. They will avoid hurtful statements and make the campaign positive and peaceful.)

In a statement, Abby said she is “deeply humbled” by the trust given to her by her father.

“As his official candidate, I will continue to pursue his vision of a competent, compassionate and transparent leadership,” said Abby.

Rappler has sought Junjun for comment, but they have yet to reply as of posting time.

Hands-off as a parent

Binay said both Abby and Junjun, who served as Makati mayor from 2010 to 2015, have proven their ability to lead the Makati city government.

(They are both at the right age, and as a parent, I can only give advise to them. I’m not the type of parent who will dictate the lives of his children, especially when they can already decide for themselves.)

Binay’s decision comes after discussions with his 3 children and the rest of their family over the weekend.

Junjun previously told Rappler he is “strongly considering to run” against Abby, but he said he will wait for Binay to return from his pilgrimage in Italy before finalizing his decision.

He accused his sister of failing to uphold the “Binay brand” of leadership in Makati. He said that 13 out of 16 councilors already pledged their allegiance to him. (READ: Emotional Abby Binay: Bring back ‘Serbisyong Binay’ to Makati)

Abby, however, said that she had not received any complaints from the city council regarding how she runs the city. She added that when she became mayor after Junjun, she “inherited” a lot of problems that she needed to fix.

“Two years ago, we found the city government in a state of neglect and disorder. Worse, dirty politics and shameless political patronage had taken their toll on basic social services, depriving our beloved Makatizens of the service they deserve,” said Abby.

“Together with my trusted team of professionals, I got down to the task of rebuilding our city by taking drastic but necessary measures to promptly restore efficiency, competence, professionalism and compassion in governance,” she added.

Abby ran for mayor and won in 2016 after Junjun was dismissed from office in September 2015. The Ombudsman had found him and other city officials guilty of the administrative charges of serious dishonesty and grave misconduct over irregularities in the construction of the Makati City Hall Parking Building.

But in May this year, the Court of Appeals overturned Junjun’s dismissal. – Rappler.com