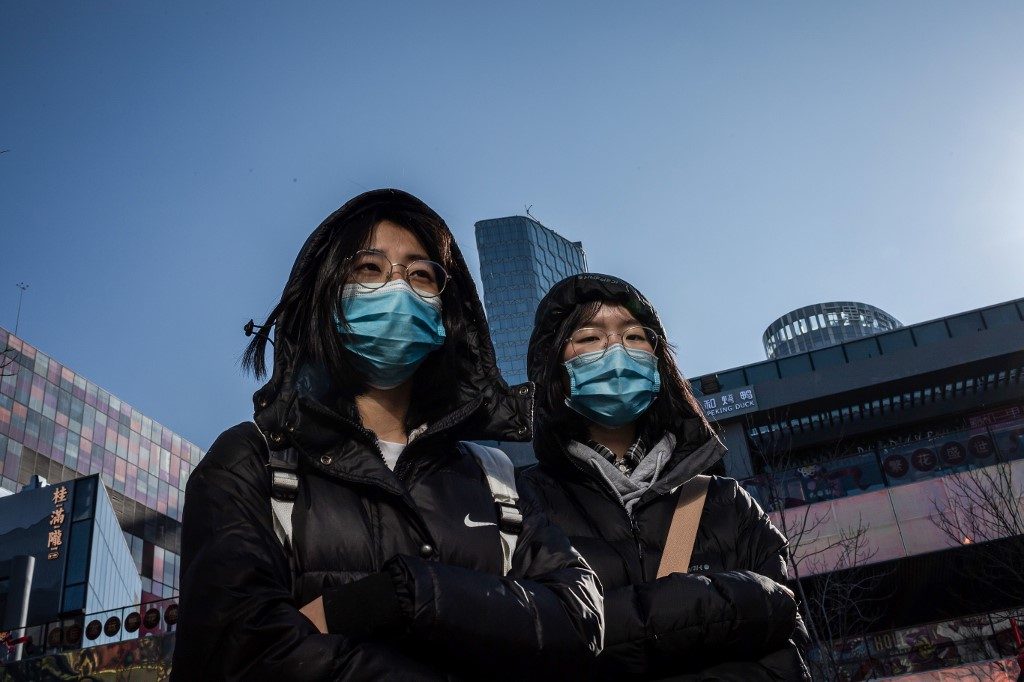 Facebook Twitter Copy URL
Copied
(UPDATED) Nearly 10,000 people have been infected in China by the new coronavirus and new cases are found abroad, with more than 20 countries now affected by the disease

BEIJING, China (UPDATED) – Countries stepped up travel restrictions on arrivals from China on Friday, January 31, after a global health emergency was declared over a viral epidemic that has killed 213 people.

Nearly 10,000 people have been infected in China by the new coronavirus and new cases were found abroad, with more than 20 countries now affected by the disease.

The World Health Organization on Thursday, January 30, declared the outbreak a global health emergency, but said it was not recommending any international trade or travel restrictions and urged the numerous countries already taking such measures to reconsider.

The US State Department raised its warning alert to the highest level, telling Americans “do not travel” to China and urged those already there to leave.

Citing a likely “sharper rise” in the spread of the virus, Singapore’s government barred arrivals and transit passengers who visited China in the past 14 days, and stopped issuing all forms of new visas to Chinese passport holders.

Mongolia will ban Chinese nationals and foreigners coming from the neighboring country by plane, train or road from Saturday, February 1, until March 2. Mongolians will be barred from going to China over the same period.

In Vietnam, Prime Minister Nguyen Xuan Phuc ordered the suspension of new tourist visas for Chinese citizens and foreigners who have been in China over the last two weeks.

Trade with China will also be “discouraged” until the outbreak abates, he said.

Japan, meanwhile, joined Britain, Germany and other countries that have recommended that their citizens avoid China.

The WHO has declared a global health emergency 5 times since the practice began in 2007 – for swine flu, polio, Zika and twice for Ebola.

It allows the UN health body to issue recommendations that the international community is expected to follow.

But the WHO warned Friday that closing borders was probably ineffective in halting transmissions of the virus and could even accelerate its spread.

“As we know from other scenarios, be it Ebola or other cases whenever people want to travel…if the official paths are not open, they will find unofficial paths,” WHO spokesman Christian Lindmeier said in Geneva.

Authorities, businesses and worried people around the world have been taking matters into their own hands.

Many major airlines this week suspended or reduced flights to China.

Papua New Guinea went so far as to bar all visitors from “Asian ports.”

Some countries banned entry for travelers from Wuhan, the city in central Hubei province where the virus first surfaced.

Italy, which has stopped all flights to and from China, declared a state of emergency on Friday to fast-track efforts to prevent the spread of the virus.

China on Friday said it sent charter planes to Thailand and Malaysia to bring Hubei residents back to Wuhan, citing the “practical difficulties” that they have encountered overseas.

In a sign of growing global anxiety, more than 6,000 tourists were temporarily confined aboard their cruise ship at an Italian port after two Chinese passengers fell ill.

They later tested negative for the coronavirus.

More than 40,000 workers at a vast Chinese-controlled industrial complex in Indonesia’s Sulawesi island have been quarantined over fears about the virus.

Myanmar sent a plane back to China after a Chinese passenger was hospitalized with possible symptoms of the virus.

The US reported its first case of person-to-person transmission of the virus on American soil – a man in Chicago who got it from his wife, who had travelled to Wuhan.

Britain and Russia each reported their first two cases.

China has taken extreme steps to stop the spread of the virus, including effectively quarantining more than 50 million people in Wuhan and surrounding Hubei province.

It has also suspended school nationwide and extended the Lunar New Year holiday in an effort to limit people travelling.

But the toll continues to swell, rising to 213 after 43 new deaths were reported on Friday. All the dead have been in China.

That exceeds the 8,096 cases from SARS (Severe Acute Respiratory Syndrome) a similar pathogen that spread to more than two dozen countries in 2002-03, and killed 774 people, mostly in China and Hong Kong.

Another 102,000 people are under medical observation in China with possible coronavirus symptoms.

The new virus is believed to have emerged in a Wuhan market that sold wild game, and spread by a Lunar New Year holiday season in which hundreds of millions of Chinese travel domestically or abroad.

Countries have scrambled to evacuate their nationals from Wuhan, with US and Japanese citizens leaving first on Wednesday, January 29.

Britain and France airlifted hundreds of their nationals on Friday.

Three people aboard Japan’s first evacuation flight tested positive after landing back home, two of whom showed no symptoms, underscoring the difficulty detecting the coronavirus.

South Korea said 18 of around 350 people who were repatriated from Wuhan were hospitalized after showing symptoms. – Rappler.com