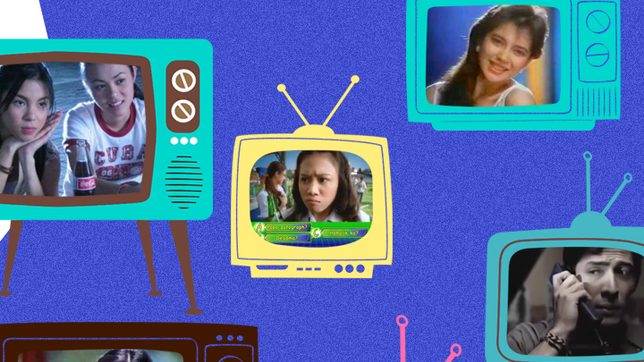 Ah, the immense power that television held back then. Before the Internet warped our media consumption habits – for better or worse, you decide – the small screen was our main source of entertainment. Pinoys would be propped on couches for hours to tune in to variety shows, soaps, and other special coverages. And what did everyone hate the most? Those intrusive yet inescapable commercials. (They’re still annoying us, but on YouTube.)

To their credit, there are also times when TV ads stood out and became local pop culture icons themselves. The lucky ones were talked about and imitated, embodying the concept of “going viral” before there was even a phrase for describing the phenomenon.

If you think that’s impossible and nothing could top the RC Cola ad or those hugot-filled (lovelorn) Jollibee shorts in terms of recall, you’re either too young or in dire need of a childhood refresher. Let’s take a trip back in time by revisiting these iconic pre-social media ads that, in today’s parlance, broke the “TV!”

McDonald’s: Who is lolo’s favorite?

Ever since, McDonald’s knows how to tug viewers’ heartstrings. In 2001, they played up on the lolo-apo (grandfather-granddaughter) dynamic in this TV commercial, where the forgetful elder kept on referring to the girl in front as the other apo, Gina, until he revealed that his favorite is Karen, the one he’s talking to. Karen delos Reyes – yes, that’s her actual name – went on to become an actress under GMA. Sadly, though, Lolo Rudy passed away in 2019.

Palmolive: “I can feel it!”

No, you did not just watch a vintage Madonna music video, but it certainly felt like one. Aside from the catchy jingle, this 1987 soap commercial is known for launching the showbiz career of a young Alice Dixson, who until then was known as the previous year’s Bb. Pilipinas International titleholder. Her flirty shoulder turn was enough to captivate everyone’s attention, and even motivated Palmolive to look for more beauties through their Circle of 10 search.

Feel it too by buying Palmolive soaps here.

If the US has the “Cups” song, we had the “Coke Beat” jingle. My proof of how popular it was: There was a time in school when each student got the lyrics and the steps of this commercial down pat. (Don’t ask what grade or year I was in.) Who are the talents? The girl in the ponytail is Cathy Bordalba, who’s now happily married to actor Ryan Eigenmann, while the one sporting a shorter hair is Chal Lontoc-del Rosario, an entrepreneur and host. A few years ago, the two got back together to recreate the routine just for kicks.

Ads work best when they reflect actual experiences, and this TV commercial for PLDT’s NDD service did just that. It tells the story of the very thing Pinoy college kids dread telling their parents the most – shifting courses. Rather than be mad, the father in the clip, a doctor, approved of his son’s decision to pursue a fine arts degree, saying “Suportahan ta ka.” (“I’ll support you” in Hiligaynon.) The line became a catchphrase, while Christian Vasquez – who played the son – became a matinee idol after that.

You can’t order a landline phone here, but other PLDT products are available online!

Lots of brands have played up the dainty mom persona in their TV commercials, but none were able to make a mark in pop culture as much as Surf’s Lumen did, played by actress January Isaac. The Lumen ads were a hit because of their teleserye (soap opera) parody style, especially in their heyday. With bated breath, viewers would watch out for Lumen’s mother-in-law’s antics – and how Lumen would always turn the other cheek with a whiter-than-white fabric washed with Surf. Wish we could also wash all problems away like that.

Visit Surf’s online store and be your own, empowered Lumen.

By now, you must have noticed that many commercial talents went on to become superstars, and here’s where Toni Gonzaga’s story started. As early as this ad alone, no one can deny her comedic chops, which sooner landed her a spot in Eat Bulaga – reminiscent of how Maine Mendoza got their attention because of her funny Dubsmash clips. Going full circle in 2014, Toni, a sought-after actress herself by then, would reunite with Piolo Pascual in Starting Over Again, where they even recreated this scene.

It doesn’t come with a Piolo meet-and-greet, but a can or bottle of Sprite is nevertheless refreshing.

Until now, there’s no single formula in guaranteeing an ad’s “virality,” and as this list suggests, it would always come by surprise. What advertising professionals should keep on doing, though, is to keep breaking out of molds and go beyond mere likes and shares if they want to have stories that transcend time and generations. – Rappler.com

Jaco is a senior content producer for Rappler’s BrandRap section. If you have budol tips or know any personalities worth featuring, message me at jaco.joves@rappler.com.
More from Jaco Joves