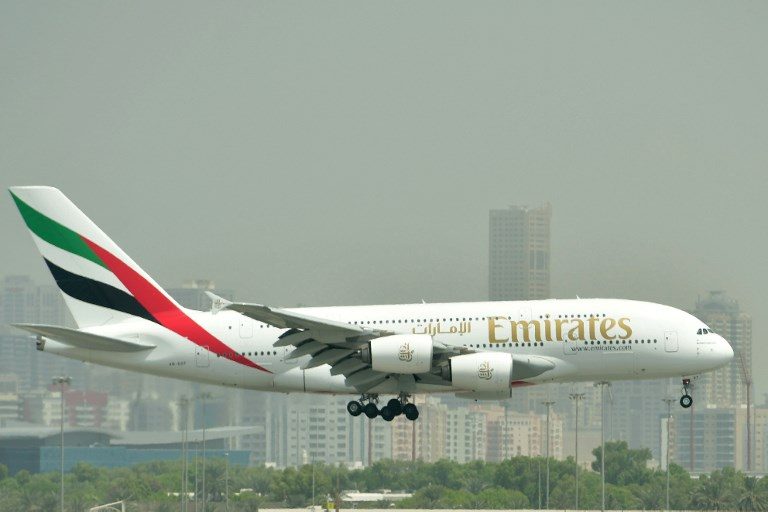 Facebook Twitter Copy URL
Copied
(UPDATED) The company says it has placed firm orders for 20 of the double-decker aircraft with options for a further 16. Deliveries are scheduled to start in 2020.

PARIS, France (UPDATED) – Emirates Airlines said Thursday, January 18, it has struck a $16 billion deal to buy 36 Airbus A380 superjumbos just days after the European manufacturer said it would have to halt production without new orders.

The company said it had placed firm orders for 20 of the double-decker aircraft with options for a further 16. Deliveries are scheduled to start in 2020.

Emirates is already the world’s biggest customer for the A380 with 101 in its fleet and 41 more firm orders previously placed.

“This order will provide stability to the A380 production line,” the airline’s chairman and CEO Sheikh Ahmed bin Saeed Al-Maktoum said.

“We’ve made no secret of the fact that the A380 has been a success for Emirates,” he said in a statement.

“Our customers love it, and we’ve been able to deploy it on different missions across our network, giving us flexibility in terms of range and passenger mix.”

The Dubai-based airline said that with the new order it will have commitments for a total of 178 A380s worth $60 billion.

The deal was expected to be signed during the Dubai Airshow in November but was delayed without any explanation amid reports of tough negotiations.

Instead, Emirates inked a deal to buy 40 Boeing Dreamliners for more than $15 billion.

Airbus’s decision in 2007 to pursue the A380, capable of packing in 853 seats, was diametrically opposed to Boeing’s bet on the Dreamliner, marketed as a more efficient plane that could be used for both medium and long-distance flights.

But the economics of the four-engine A380 have proved daunting, with airlines having to operate every flight at full capacity in order to make a profit.

Airbus warned on Monday, January 15, that it might have to end production of the A380, having booked no new orders for the plane in two years.

It said it regarded Emirates as the only airline with the capacity to place an order of the size required to keep production going.

“Quite honestly, if we can’t work out a deal with Emirates there is no choice but to shut down the program,” Airbus sales director John Leahy said Monday.

The company said it needed to build at least six of the aircraft per year for the program to remain viable.

On Thursday, Leahy seemed relieved that Airbus’ strategy of staring down Emirates appeared to have paid off, saying the program was now good to go on for at least another decade.

“This new order underscores Airbus’ commitment to produce the A380 at least for another ten years. I’m personally convinced more orders will follow Emirates’ example and that this great aircraft will be built well into the 2030s,” Leahy said.

Airbus is hoping China will lead a revival in orders once demand for long-haul planes picks up, arguing that the plane is ideally suited for mass-market travel and for heavily congested airports.

Emirates operates a fleet of 269 wide-bodied aircraft and flies to 157 destinations.

Calling the deal “a relief for Airbus”, independent commercial aviation expert John Strickland said it probably saved the A-380 program.

“Without it, production would likely have been terminated,” Strickland said.

“It is not a guarantee of financial success for the program but buys Airbus time to go out and secure additional orders from other airlines,” he said. – Rappler.com