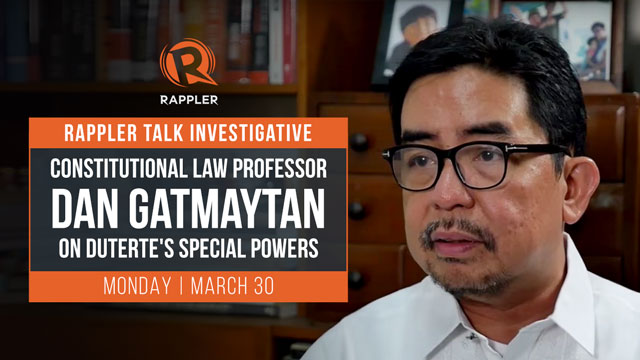 Bookmark this page to catch the interview on Monday evening, March 30

These were granted through the Bayanihan to Heal as One Act of 2020 signed by the President on March 25, a day after Congress passed the bill. The powers are valid for 3 months unless extended by Congress or terminated earlier through a concurrent resolution or a presidential proclamation. (READ: Congress reins in Duterte’s special budget powers)

On Monday, March 30, Rappler editor-at-large Marites Vitug talks to professor Dan Gatmaytan, who teaches constitutional law at the University of the Philippines Diliman, to discuss the issues surrounding the special powers granted to the President.

Why is there a need for this recently signed law? How can Duterte use his special powers efficiently to combat the further spread of the coronavirus while protecting the welfare of Filipinos?