SMIC to go digital? Tessie Sy-Coson says they’re not in a rush 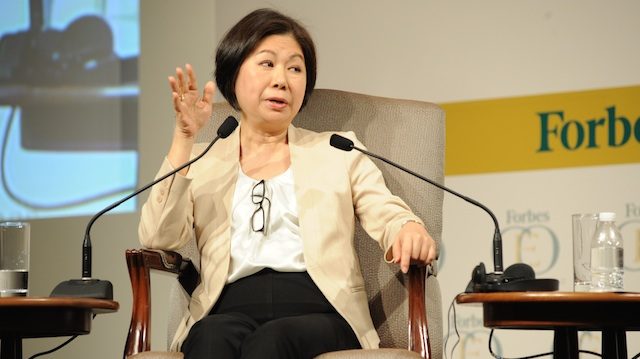 SINGAPORE – SM Investment Corp (SMIC) Chairperson Tessie Sy-Coson is aware that going digital is the next frontier in business. But SMIC, which has substantial interests in retail, banking, and property development, isn’t rushing to get there.

In an exclusive interview with Rappler on the sidelines of the Forbes Global CEO Conference in this city-state on Wednesday, October 29, Sy-Coson agreed that there is “no escape” from going digital, but said that in the Philippines, businesses have the leisure to wait a little longer before making the move.

“There’s pressure but not as much as in other countries,” said Sy-Coson, dubbed one of Asia’s most powerful businesswomen by Forbes Magazine. “Even Indonesia, the way they look at IT is different from the way we see it. Maybe it’s the need to reach far-flung areas, it’s a bit more than us, or more than what our companies are doing.”

Sy-Coson said in terms of retail, e-commerce is an inevitable move, but said “at this point the Philippines is not as efficient as other countries.” She also said SMIC’s banking business which consists of BDO Unibank Inc and China Banking Corporation, will also definitely move to the technology side.

‘Not a bad thing’

But Sy-Coson said the slower pace of going digital, especially in the Philippines, is not necessarily a negative thing.

“It’s not exactly bad. Tech takes away a lot of human labor and I guess we have a lot of inconvenience and we’ve been seeing a lot of labor to use many things and with that, we provide a lot of employment,” she said. “So I don’t think we’re exactly in a bad situation just because we’re not advanced in the tech aspect.”

Despite this, Sy-Coson said she believes IT will lead the way for the Philippines when it comes to the ASEAN integration in 2015, adding that the Philippine technology industry is most prepared, in her opinion.

“I think the IT, the technology side [is most prepared]. I have seen a few, a couple that have received awards in ASEAN,” said the ASEAN Business Advisory Council (ABAC) member. “In terms of IT or tech, I think that’s really the one where we can go across the border faster than other types of businesses.”

As for SMIC’s own preparations for 2015, Sy-Coson said the company is “looking around where to invest and where can we grow our mall or other property developments.”

“We’re still looking. We’re aware of the potential of a 600-million consumer market, and also that we will become part of the bigger market…that has really made us go around and look around. We’re still in that stage,” she said but did not elaborate.

Sy-Coson admitted that ASEAN integration also means increased competition for their business, but remained optimistic, adding “the world is moving from competitions to more collaborations.”

By end of 2015, the ASEAN economic community (AEC), a common market and production base, will take shape in 10 ASEAN member-states, including the Philippines.

A joint study by the International Labor Organization (ILO) and the Asian Development Bank (ADB) shows that if done properly, the integration will bring forth freer flow of goods, services, and investment. Skilled labor will impact the region’s economy, including jobs, skills, wages, and labor mobility. – Rappler.com