Facebook Twitter Copy URL
Copied
Iglesia ni Cristo celebrates on July 27 its centennial, and the construction of the Philippine Arena is one of the event's highlights

MANILA, Philippines – The Iglesia ni Cristo (INC) opens on Monday, July 21, its own gigantic coliseum – the Philippine Arena – in time for their upcoming 100th founding anniversary this year.

The opening of the arena is one of the highlights of INC’s centennial celebration on July 27.

During the construction of the arena and up to the time it was finished, it made headlines because of its interesting features.

Here are things you need to know about the Philippine Arena.

1. The Philippine Arena is the centerpiece of Ciudad de Victoria.

INC says this huge structure is one of the highlights of Ciudad de Victoria, a massive 75-hectare complex constructed by the group in Bulacan. The complex actually spans 2 towns in Bulacan – Bocaue and Sta Maria.

Apart from the arena, the complex will also house the Eraño Manalo Medical Center, the Bulacan campus of the New Era University, the Philippine Stadium, and the Philippine Sports Center.

2. It is the largest indoor arena, not just in the Philippines, but in the whole world.

The Philippine Arena alone was built on a total lot area of 74,000 square meters, and has a total floor area of 99,000 square meters. It has more than 50,000 seats – larger and more spacious than the Mall of Asia Arena in Pasay City, and the Smart Araneta Coliseum in Quezon City. The group says the arena’s roof will contain 9,000 tons of steel and will span 520 feet. The entire structure will be 200 feet, or around 15 stories high.

In a documentary produced by the Discovery Channel in 2013, architect Andrew James explained that normal coliseums have a maximum of 25,000 seats – making the Philippine Arena, with its 50,364 seats, among the special indoor arenas in the world to have more seats.

Coming second to the Philippine Arena in terms of number of seats, is the Gwangmyeong Velodrome in South Korea, which has a 30,000 seating capacity.

3. It has a unique layout compared to other indoor arenas in the country.

Compared to ordinary coliseums where the stage is in the middle and is surrounded by seats, the Philippine Arena distinctively resembles an ancient Greek ampitheater, built in a semicircle and with seats at the front and sides of the stage only.

The seats in the Philippine Arena are divided into 3 sections, with each section having seats colored based on the INC flag – green, white and red. A company in Australia, Populous, designed the architecture of the Philippine Arena. London-based Buro Happold was in charge of the structural engineering, while South Korea-based Hanwha E&C managed the construction.

Canada-based Engineering Harmonics provided the audio and video design in the arena.

5. It is made ready for any potential disasters.

The 2013 Discovery Channel documentary highlighted the fact that the arena was built to be “quake-proof.” According to the documentary, the Philippine Arena was “built with strength and flexibility,” and that it can “survive the country’s seismic forces.”

In the documentary, James also explained how they studied crowd mobility in the arena. He said they made sure there are enough exits, and that spectators inside will be able to ecape the arena within 4 to 6 minutes when a disaster strikes.

6. Some Philippine symbols inspire the design of the arena.

Hanwha E&C stated in its website that the initial concept of the Philippine Arena “is motivated from Narra tree, the mother tree of Philippines, and the root of Bantayan tree.”

Also, Populous mentioned in its website that the arena’s roof design is inspired by the thatched roof of the country’s traditional nipa hut. 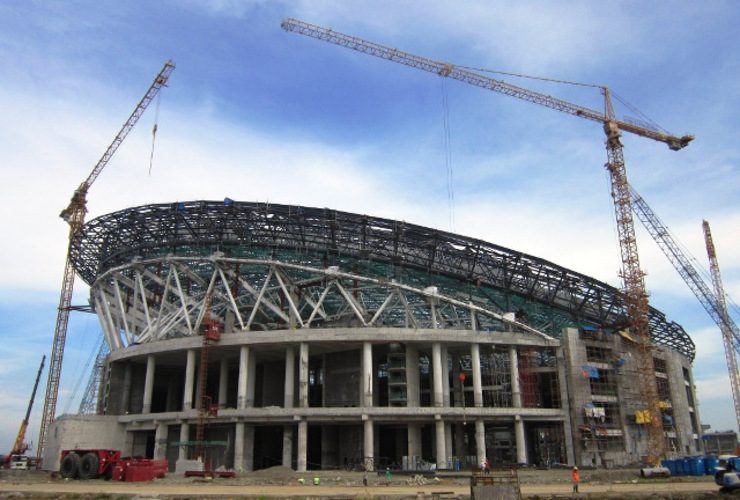 The construction, however, was not without mishap. In July 2013, two Filipino workers died, while another was critically injured. Then in December 2013, a Korean worker died, while 2 FIlipino workers were injured.

8. The construction has been awarded as among the best projects in 2013.

The construction of the Philippine Arena was recognized in 2013 by World Finance as the best sports project (medium cap project category) in Asia.