May 2, 2017 12:05 PM PHT
Agence France-Presse
Facebook Twitter Copy URL
Copied
The 'Fahrenheit 9/11' director is set to debut 'The Terms of My Surrender' at the Belasco Theatre 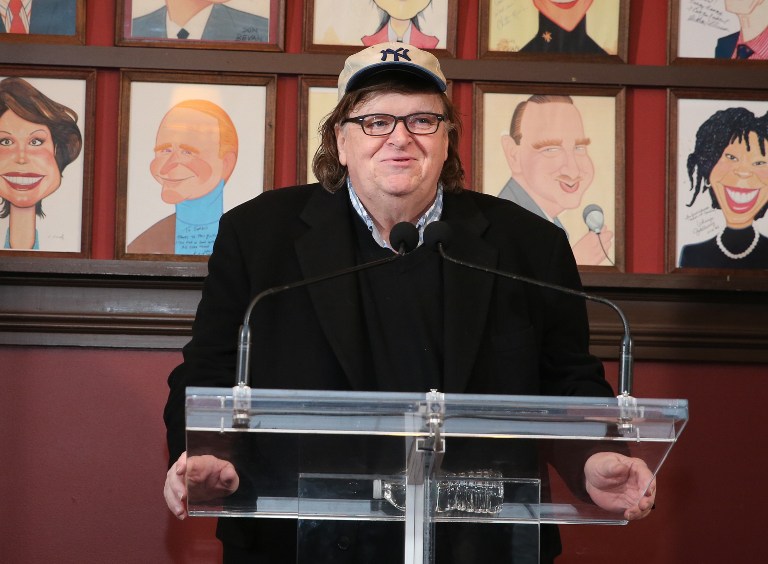 NEW YORK, USA – Film provocateur Michael Moore will make his theatrical debut in a one-man show that explores the rise of US President Donald Trump and the resistance to him, producers announced Monday, May 1.

The Terms of My Surrender, which will open in previews on July 28 at the Belasco Theatre on Broadway, was described as “an exhilarating, subversive one-man show guaranteed to take audiences on a ride through the United States of Insanity.”

The show will explain how Trump emerged and “where best to dine before crossing over the mountains with the Von Trapp family into Canada,” the Belasco Theatre said in a statement, in an allusion to flight from Nazi-ruled Austria in The Sound of Music.

“To unseat a president, it will take an act of Broadway,” it said.

Moore, who had his start as a print journalist, has combined staunch left-wing activism with humorous personal asides in films such as Bowling for Columbine, which tackles US gun culture, and Fahrenheit 9/11 which took aim at former president George W. Bush’s “war on terror.”

Known for his slovenly look and ever-present baseball cap, Moore lives in his home state of Michigan. He accurately predicted last year that such industrial Midwestern states would swing the election to Trump at a time when most pundits thought the billionaire mogul stood no chance against Hillary Clinton.

The Terms of My Surrender will be directed by Michael Mayer, who collaborated with punk rockers Green Day on their politically charged musical American Idiot and won a Tony Award for Duncan Sheik’s rock musical Spring Awakening.

“I think what the world needs right now is Michael Moore standing on a Broadway stage sharing his hilarious stories and incendiary political perspective, creating the kind of dialogue that can only happen in the theater,” Mayer said in a statement.

Nonetheless, Broadway can be unforgiving to famous names who try to make it. Pop star Sting and TV host Rosie O’Donnell are among celebrities whose live productions have struggled in recent years. – Rappler.com