Facebook Twitter Copy URL
Copied
There were quite a few scandalous moments at this year's 'Naked Truth' show, including one involving Coco Martin leading a woman wearing a leash
MANILA, Philippines – Retail brand Bench issued an apology on its social media accounts after receiving negative feedback about parts of the recently concluded Naked Truth underwear show, held last Saturday, September 20 at the Mall of Asia Arena.
This was particularly regarding the segment which had actor Coco Martin walking onstage with a model in her underwear, wearing a leash, which many condemned as derogatory. (READ: In Photos: Stars sizzle in undies, denim at Bench ‘Naked Truth’ fashion show) 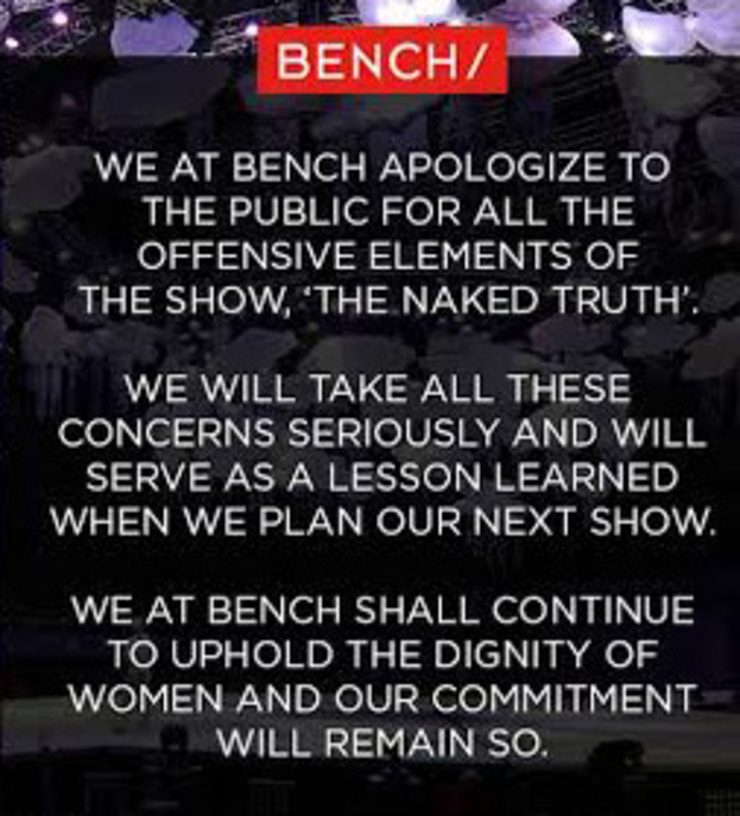 In a statement posted on her website. Senator Pia Cayetano, a supporter of women’s rights, also expressed her disappointment about the incident and said that she spoke with Bench owner Ben Chan about the matter.

“I immediately raised this issue to Ben Chan, Chairman and CEO of Bench – who I happen to know personally. I told him that while I respect the artistic license of the team that conceptualized the fashion show, the derogatory portrayal of women is offensive and should not be tolerated. Such portrayals reinforce society’s sexist view of women, instead of contributing to the gender education of our people, especially of our youth,” Cayetano said.

“Mr. Chan assured me that his company would immediately issue a public apology – which they did this afternoon. I commend Mr. Chan for taking a hands-on approach on this issue and for showing his sense of social responsibility. Being one of the country’s most successful global brands, their commitment to uphold the dignity of women sets the right example.”

In an earlier statement, former Gabriela Rep. Liza Maza hit the brand for their portrayal of women on the show.

“Bench should be held accountable for this degrading and dehumanizing portrayal of women and should apologize,” she wrote on Facebook.

The underwear show, held once every two years, brings together Bench’s many celebrity endorsers in a sexy fashion show setting.

Known as one of the racier events where stars can let their hair down, tease the audience, and strip down to their underwear, the show varies from theme to theme every time.

Aside from Coco Martin, other stars such as Kim Chiu, Jake Cuenca, Paulo Avelino, Marian Rivera, and couple Richard Gutierrez and Sarah Lahbati walked the runway this year. (In gifs, pics: 12 hottest highlights of the Bench ‘Naked Truth’ show) – Rappler.com