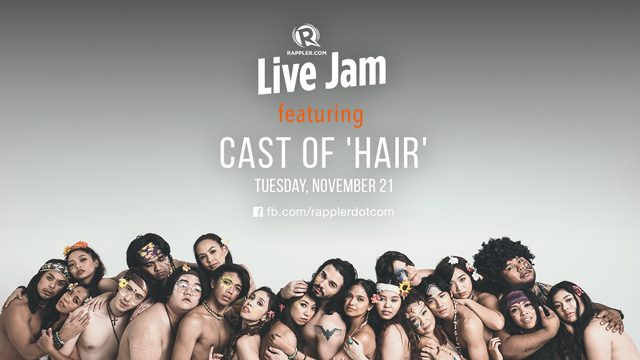 MANILA, Philippines – The cast of Hair is bringing the play’s psychedelic rock sound to Rappler HQ!

Staged by Repertory Philippines as part of its 50th anniversary season, Hair is a “tribal love-rock” musical set in the ’60s, when the sexual revolution, free love,  and anti-war and anti-establishment feelings filled the air.

REP’s production has Markki Stroem and Topper Fabregas alternating for the role of Claude, a farm boy who finds himself caught between joining the military or a hippie movement protesting the Vietnam War.

Joining them in the cast are George Schulze and Caisa Borromeo as the hippie activists who inspire Claude to embrace peace instead of war.

Catch the cast as they bring the spirit of the ’60s to life! Here’s their Live Jam setlist.

The cast of Repertory Philippines’ production of ‘Hair’ performs “Aquarius,” a song in the play where Claude, played by Markki Stroem, is inducted into a tribe of hippies protesting the Vietnam War.

The cast of Repertory Philippines’ production of ‘Hair’ performs “Good Morning Starshine.” In the play, the hippie tribe sings the song around the camp fire as they spend what is potentially their last night together as a group.

The cast of Repertory Philippines’ production of ‘Hair’ performs “Walking in Space.” In the play, the song plays as Claude, played by Markki Stroem, has a hallucination where he understands his place in the world.