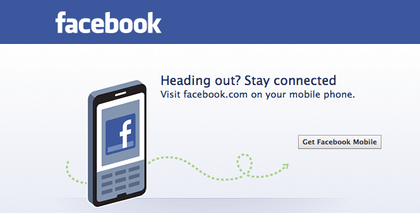 SAN FRANCISCO, United States (AFP) – Facebook on Thursday began rolling out an App Center for mini-programs that plug offerings such as Pinterest or Draw Something into the leading social network.

The App Center feature opened its virtual doors in the United States with 600 programs geared for Web browsers as well as those for Apple and Android smartphones or tablet computers.

Facebook’s App Center will expand globally in the coming weeks as part of a Facebook strategy to connect with its more than 900 million members on mobile gadgets.

“The App Center is designed to grow mobile apps that use Facebook whether they’re on iOS, Android or the mobile web,” Facebook’s Aaron Brady said when it was announced in May.

“From the mobile App Center, users can browse apps that are compatible with their device, and if a mobile app requires installation, they will be sent to download the app from the App Store or Google Play.”

Facebook’s Matt Wyndowe promised in a blog post on Thursday that recommendations would be personalized to the tastes of each member of the social network based on the likes of friends in the online community.

Applications are ranked based on quality, popularity and other metrics.

Applications at the center must be designed to let people sign in using Facebook Connect. – Agence France-Presse