Your guide to Din Tai Fung in Manila: The soup dumplings, what to expect, prices MANILA, Philippines – It was after 10 pm, and the candles had burned bright for most of the night, illuminating our dinner with the gentlest, softest glow.

The feast had yet to end. Delivered in their own little steamer baskets, the mythical xiao long bao (also called soup dumplings) were revealed one by one to the delight of the small group of diners witnessing the first look at Taiwanese global chain Din Tai Fung‘s first restaurant in the Philippines.

Such a decadent dish requires a great reveal. Truffle xiao long bao — YES we will have it too in Manila!!! pic.twitter.com/4hjnQj0n43

Talk gives way to slurping, until the spoons rest back on the plates and the soupy spell, having worked its magic, is broken.

Tasting said dumplings is a complete and absorbing experience. Minced pork is combined with a gelatinous mixture, which becomes the soup when steamed. The doughy exterior, fleshy and translucent, precisely measured and weighed, holds it all. A perfect dumpling has about 18 folds, and it takes half a year of training before you can be certified to make them. Like its counterparts in other countries, the core items are all there, including the different xiao long bao variants – but there are items that will only be available in the Philippines.

Here’s a sneak peek at what you’ll see when the restaurant finally opens to the public December 8. 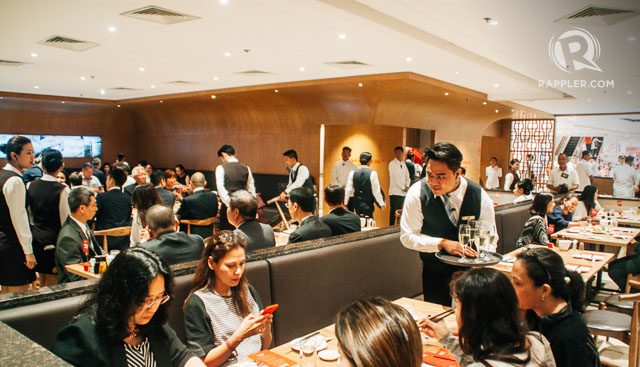 It isn’t uncommon to come only for the soup dumplings; they are unquestionably the highlight of the menu, and that isn’t likely to change.

Gently lift one with your chopsticks – from the top, or carefully from the sides – and lay it on your soup spoon.

How you’ll enjoy it is up to you, but many like to poke or bite a small hole in order to slurp the soup, then enjoying the rest with a little sauce, made of soy sauce, vinegar, and ginger. Don’t miss this; it’s the menu’s star item and nothing beats this option in its simplicity. Xiao Long Bao is available in other restaurants all over the world, but diners flock to Din Tai Fung for a reason. Their version is filled with a broth so savory and substantial that it makes an immediate and indelible impression. 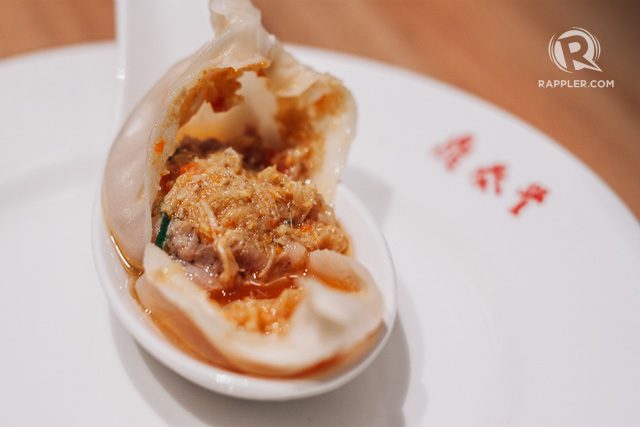 The crabs are sourced from the Philippines – and the taste is distinct, but not overpowering. Popular as a lighter option, the chicken xiao long bao is also filled with chicken soup. Note the little flour chick that comes with the order – it’s to mark which type you’re eating. Yes, Manila will also have Din Tai Fung’s premium truffle xiao long bao, with the foie gras version to follow later. The one photographed above came with a full sliver of earthy, intense, and flavorful truffle inside. You order these per piece. This won’t be on the menu right away when the restaurant opens, but franchise owners say that it’s on the way. Five hefty grams of foie were in this soup dumpling. Dessert xiao long bao? Oh, yes. This one comes with only chocolate inside, not mixed in with red bean as they are in other countries.

Here’s a look at the dessert’s hypnotic insides, courtesy of writer and editor Cheryl Tiu:

A must at Din Tai Fung Philippines.. Chocolate lava xiao long bao.. Sooo good! This is only in the Philippine branch!!  The other countries have red bean, if you remember Opens on December 8! #dintaifungph #dintaifung #xlbisdtf #themomentgroup #chocolatelava #xiaolongbao #smmegamall #megafashionhall #dessert

Unfortunately, I didn’t get to photograph the insides, but from its shape, you can see that the filling is much more dense than the ones in the others.

Here’s the red bean dumpling (P105 for 3 pcs). Rich and very dense, these can be eaten in more than one bite. Ask for the iced roast tea to wash it all down. They also have mango sago with pomelo (P95) – very similar to the one offered at Tim Ho Wan, but I think the dairy element is more pronounced in this version. Don’t miss the other dishes which are not as hyped up as the xiao long bao, but are just as good. The flavors are familiar, but do not assault the senses. Not to worry – this isn’t as spicy as it looks. You’re advised to mix in the wontons with the oily sauce. The shrimp isn’t chewy or overcooked – it’s plump and bouncy, with flavor distinct from the pork filling. Have fun mixing the pristine noodles in the thick and savory peanut sauce.

A number of items are tagged featured dishes for the Philippines. They are delicious – but save most of the space in your belly for the dumplings. For those looking for other things to eat, there are other options, too.

Don’t miss the appetizers, order one or two to whet your appetite. Spongy gluten? Give it a try. Most people at the table were raving about this chewy appetizer, which also includes bamboo shoots, mushroom, and edamame. Crunchy and savory, the oily sauce completes this appetizer, a personal favorite. The flavors here are very comforting and familiar – get one order to share, but don’t miss the Kao Fu or the cucumber. A cold appetizer of glass noodles, pepper, bean curd, and seaweed. This may not be for everyone, but the cold dish oddly helps enhance the components’ textures. A single order is already quite plentiful. What’s remarkable here is really how tender the meat is and how easy it is to eat, as there is only a single long bone inside. Veggies don’t actually take the back seat here, and instead provide a nice change in texture that complements the rest of the rich food. For rice-lovers looking for something to go with the dishes above, though it’s not really necessary if you’re only ordering the xiao long bao.

Another salted fish fried rice (P185) was served at the Din Tai Fung event on the eve of its grand opening to the public. Glistening and so tempting with its bright colors, this is nice, but you may want to skip this on the first visit in favor of the other highlights on the menu. Din Tai Fung’s first branch will open December 8, and it’s located on the first floor of SM Mega Fashion Hall right next to Tim Ho Wan. This is a formidable addition to the mall’s roster of restaurants, as well as to the Moment Group’s lineup of food brands, which include Ooma, Mecha Uma, Linguini Fini, and 8 Cuts.

Yes, there are likely to be very long lines around the time of the opening, but a tightly coordinated seating and serving process and a sophisticated point-of-sale system is in place to keep things moving swiftly, as I’ve seen in other branches in Taiwan and Singapore.

Will you be paying Din Tai Fung a visit? Let us know in the comments below. – Rappler.com

Note: The soup dumplings are photographed in smaller portions, but they are really served in orders of 5 or 10 pieces. The photos that originally appeared in this story were shot in low light. They have since been replaced with new images photographed at the Din Tai Fung event Monday, December 7. New dishes served at this event have also been added to this story.