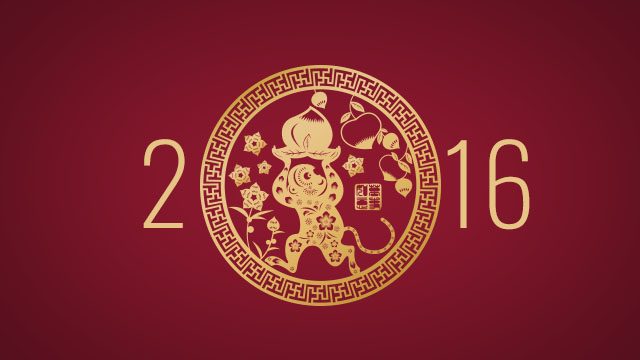 MANILA, Philippines – A new year is coming up, and with 2016 comes the Year of the Fire Monkey.

Feng Shui expert Marites Allen told members of the press on December 7 what’s in store for the people born under different Chinese zodiac signs when the Chinese New Year rolls around on February 8.

For everyone, she said, anything associated with the water element will be auspicious. The year’s lucky colors then, are blue, black, and gray. Industries like shipping, banking, spas, and tourism will be successful.

When it comes to individual animal signs, here’s what you can expect starting this February 2016, based on Marites’ presentation.

To find out your animal sign, enter your birth date below:

Year of the Rat

Rats will have a lucky year in terms of money but they would have to watch out. “You’re going to be prone to jealousy, politicking and backstabbing,” said Marites.

Year of the Ox

In the Year of the Sheep in 2015, the Ox had bad luck because he’s considered the enemy of the Sheep.

In 2016, the Ox will have more luck and stronger chances of success. Still, Marites advises, “Lie low, take it easy, do a lot of charity work to counter the negativities of the year that may hinder your success.”

Year of the Tiger

Tigers won’t have such a great year when it comes to health and luck, because the Tiger is the enemy of the Monkey. “There are forces on your chart that will test your motivation and resolve.”

Year of the Rabbit

Marites said that the Year of the Monkey will be very exciting for Rabbits: “Auspicious stars indicate exciting happenings in your life. Your star of creativity is at its peak. Create, build beautiful things, and believe that you can make it happen.”

According to Marites, the imagination of Rabbits will be limitless.

Year of the Dragon

“Anything that you touch can be turned into gold,” said Marites. Dragons have a great year ahead, so take advantage of your luck.

“So many positive indications on your chart that is almost unbelievable!” read Marites’ presentation. “Go and paint the town red!”

Year of the Snake

2016 is looking good for the Snake, but he has to be mindful about losing money, said Marites. “The presence of your astrological allies in this year’s chart bring you positive indications, but be careful of being cheated or robbed.”

Year of the Horse

The same goes for the Horse, who will have quite a good year but will need to be on his toes: “Your natural confidence will get a boost, filling everything you can with positivity. Be careful with your moves as you may have tendencies of being involved in something that will cause you to lose your name and honor.”

Marites also warned Horses against doing renovations in the south corner of their homes.

Year of the Sheep

The Year of the Monkey will be great for the Sheep, but it’ll be up the Sheep  to make things happen. “Grab [all the] opportunities that you can take in, for as long as you can…as [they] may not last long, and you will lose good chances.”

Year of the Monkey

This is a rare year for the Monkey, as the star of prosperity falls on his chart this 2016. The star “brings you potential wealth and abundance in everything that you do,” said Marites. “Sky is the limit, this only happens once every 12 years, claim it!”

Year of the Rooster

Roosters, Marites said, will be lucky in love: “Although this year brings you an average reading, there are still many positive things that you can look forward to especially in travelling, education, and even love, romance.”

Year of the Dog

Marites further advised, “It’s up to you to really, really make use of [your luck].”

Year of the Boar

Beause the Boar’s secret element is water, he will be very lucky this Year of the Fire Monkey. “Enjoy the moment!” said Marites.

With 2016 about to start, it’s best to kick it off with a positive attitude and be prepared for whatever may come. Happy New Year! – Rappler.com