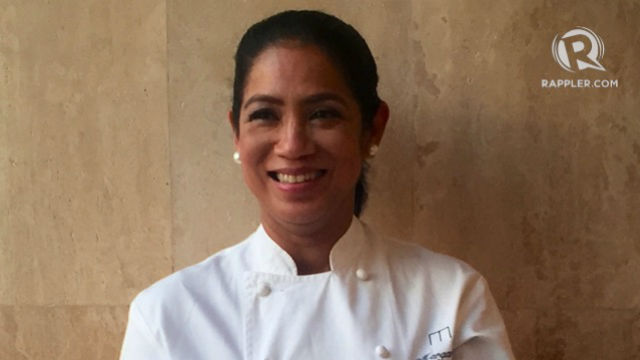 Margarita is the chef behind popular local restaurants like Cibo, Grace Park, and Lusso. She also prepared the Asia-Pacific Economic Cooperation (APEC) summit welcome dinner for APEC leaders, together with Via Mare founder Glenda Barretto. The APEC was held in Manila in November 2015. (IN PHOTOS: Beautiful Pinoy dishes at APEC 2015 welcome dinner)

At a press conference on Tuesday, January 12, an emotional Margarita shared that she was only told about the award that morning. (READ: 25 over 25: women exceeding expectations)

“[Thank you] not only to my son and my family who’ve been behind me all the way. I think that the biggest thank you must go to my incredible team that through the years have been with me through thick and thin, and without [whom], I would not have been able to be distinguished in such – I mean, such an awesome way.”

Margarita was a public accountant by training, but decided to set up a catering business, Cibo di M, after coming home from a trip to Italy in 1987. She opened her first restaurant, Cibo, in 1997.

“This is a real.. gift for all of that right? It’s a real validation of the work we’ve been doing for so long,” Margarita said in an interview after the press conference.

Margarita is known for fusing her Italian background with Filipino cooking and ingredients. On her philosophy, she said, “When I prepare anything or when I put a concept together I like to highlight the best of the Philippines with the best of the world.”

“People never really honored [Filipino ingredients], or put them on the highest tables anywhere in the industry before,” she continued. “And I think that’s been a real underlying advocacy. And I think that fast forward to today, it’s been worth the effort to really push it, because other chefs, both old and young – especially the young chefs now – are proud to do the Filipino cuisine.”

More than 300 industry experts from the region vote for Asia’s Best Female Chef, along with other individual awards and the Asia’s 50 Best Restaurants list.

“[Carrying this title] bears a lot of honor, but I think it also bears a lot of responsibility on my part, to be the spokesperson and to help showcase the rest of the stuff that’s undiscovered, or to sort of clear up some misconceptions about our cuisine and what we have in our country. There’s so much more that we can share about our country and our cooking,” she said.

Since 2013, the Asia’s Best Female Chef award has recognized exceptional female chefs who have earned the respect and admiration of those in the industry. The 2015 winner was chef Vicky Lau from Hong Kong. Margarita is the first Filipino chef to win the award.

Aside from giving honor to Filipinos, Margarita agreed that the award also means a lot to female chefs. “When I started in 1987, there were no female chefs in the kitchen of the Hyatt, where I did my first food festival. And I love the fact that today, when you look at all the kitchens, there are just as many females as men in the kitchen,” she said.

The formal awarding ceremony will be held on February 29, in Bangkok, Thailand. The voting results for Asia’s 50 Best Restaurants 2016 will be announced there as well.

What do you think of Margarita Fores being named Asia’s Best Female Chef this 2016? Let us know in the comments! – Rappler.com