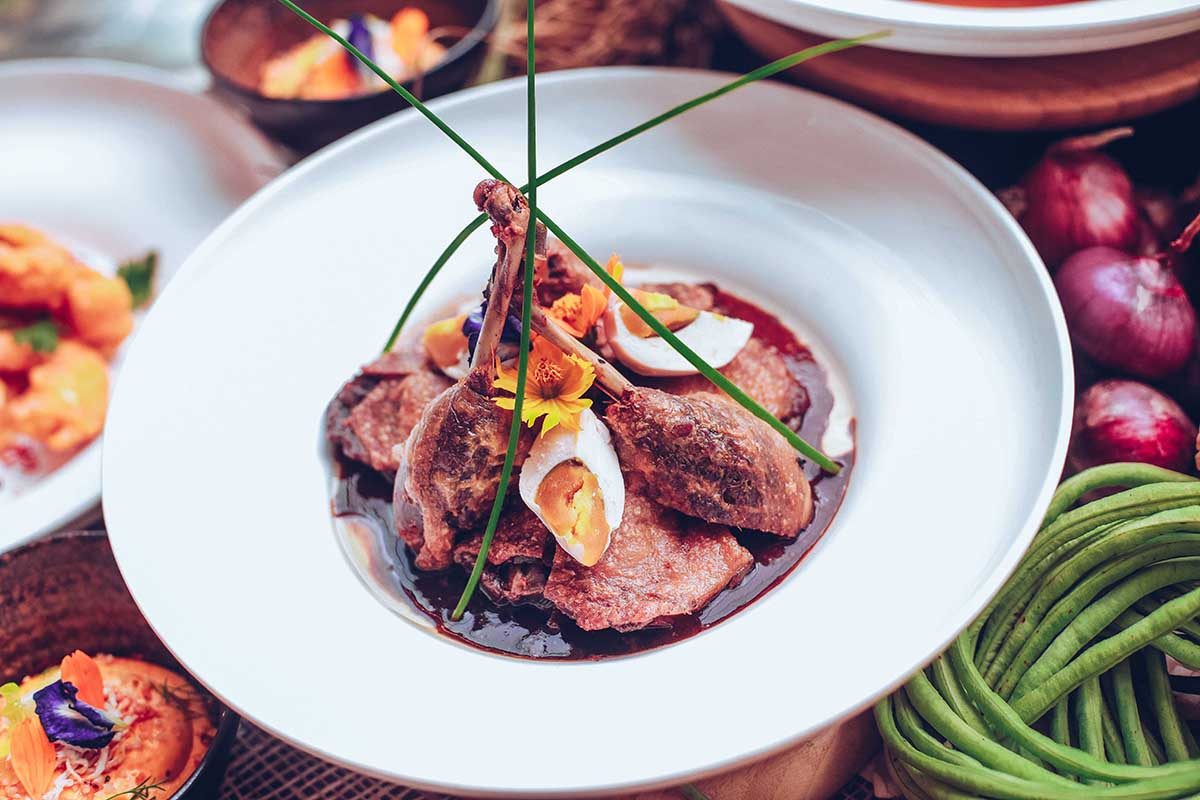 Collaborating with two of the country’s top chef, the festival showcases well-loved Filipino comfort food with pleasant twists. Tasting each dish is like a culinary journey that unearths local gastronomic treasures.

Known as one of the country’s purveyor and innovator of Filipino food, Chef Sau del Rosario takes cue from diverse influences. For starters, enjoy the Oyster Ceviche using oysters from Aklan, drizzled with calamansi and coconut cream, and topped with chicharon.

A crowd favorite, the one of a kind Crispy Pork Kare-Kare Macadamia is simmered with macadamia nuts and truffle oil for that added texture and flavor. On rotation are other dishes like the Tamales Pampanguena, Sinigang Flan, Lamb Adobo with Garlic Confits, and many more.

Elegantly displaying his expertise in design and taste, Chef Miko Aspiras highlights a colorful selection of delectable desserts. The Dayap is inspired by the lime fruit, using coconut mousse with lime curd dipped in praline cocos.

Transforming the Filipino favorite black forest cake, the Cherry are layers of fluffy chocolate sponge and cherry mousse. Other desserts to look forward to are the Mandarin Cheesecake, Keso de Bola Macaron, Grape Choux, and more. We spoke with Chef Miko Aspiras and he gladly shared the concept behind the delish sweets that guests have been raving about:

How long did it take to conceptualize the desserts for this festival?

Miko: I find it easy to conceptualize anything because I believe that’s my strength as a chef – conceptualizing dessert combinations and flavors. It was just in a snap for me.

Fruits like cherry, mansanas, and dayap inspired the desserts. What is the theme?

Miko: When Diamond Hotel presented the idea of doing a Filipino-themed buffet, I told myself that I didn’t want to be literal – I didn’t want to do kakanin or local delicacy because that’s not my forte. I immediately thought of local fruit markets. At first, I started with Mango and Dayap, then it became more than that.

Now, I have Cherry the black forest. People were asking me what’s Filipino about black forest? I answered, “What’s not Filipino about it?” We all grew up eating that. This version is different from the original one since it’s already very Filipino. That’s how I thought of it, how I envisioned Filipino desserts. It’s global but using local ingredients, mixing it with different types of technique. What’s the secret to making desserts that look so good to eat?

Miko: There’s no secret, it’s just how I do things. Visually, I’m very artistic and I draw a lot. I have a vision in my head all the time on how I want things to be done from the components, to the construction, and the flavors.

Miko: That’s my priority all the time. First thing I think of is the flavor combination. But, you can never tell now if this will work or not. The entire world is just very global and the world is not afraid of mixing flavors anymore.

Talking to Chef Sau, on the other hand, was quite interesting in mapping insights on culinary history and geography.

What was your idea in creating the dishes for the festival?

Sau: I’m a big advocate in promoting Philippine cuisines, especially abroad. This is my third time with Diamond Hotel. It’s super awesome that they allow me to bring Philippine cuisine on the spotlight again; they’re making it as a platform to showcase local cuisine – you don’t have to travel around to find out what kind of food we have.

My concept is to elevate the flavors and aesthetics to make it more global. That’s what I’m doing abroad. For example kare kare, when you eat it everything is in the sauce with the vegetables. I think to redefine good food should not only be in terms of flavors, but also aesthetic and textures. I made a way to improvise it without really changing the recipe like the kare kare with macadamia and the crispy pork belly. The sisig, I made it into a paella. 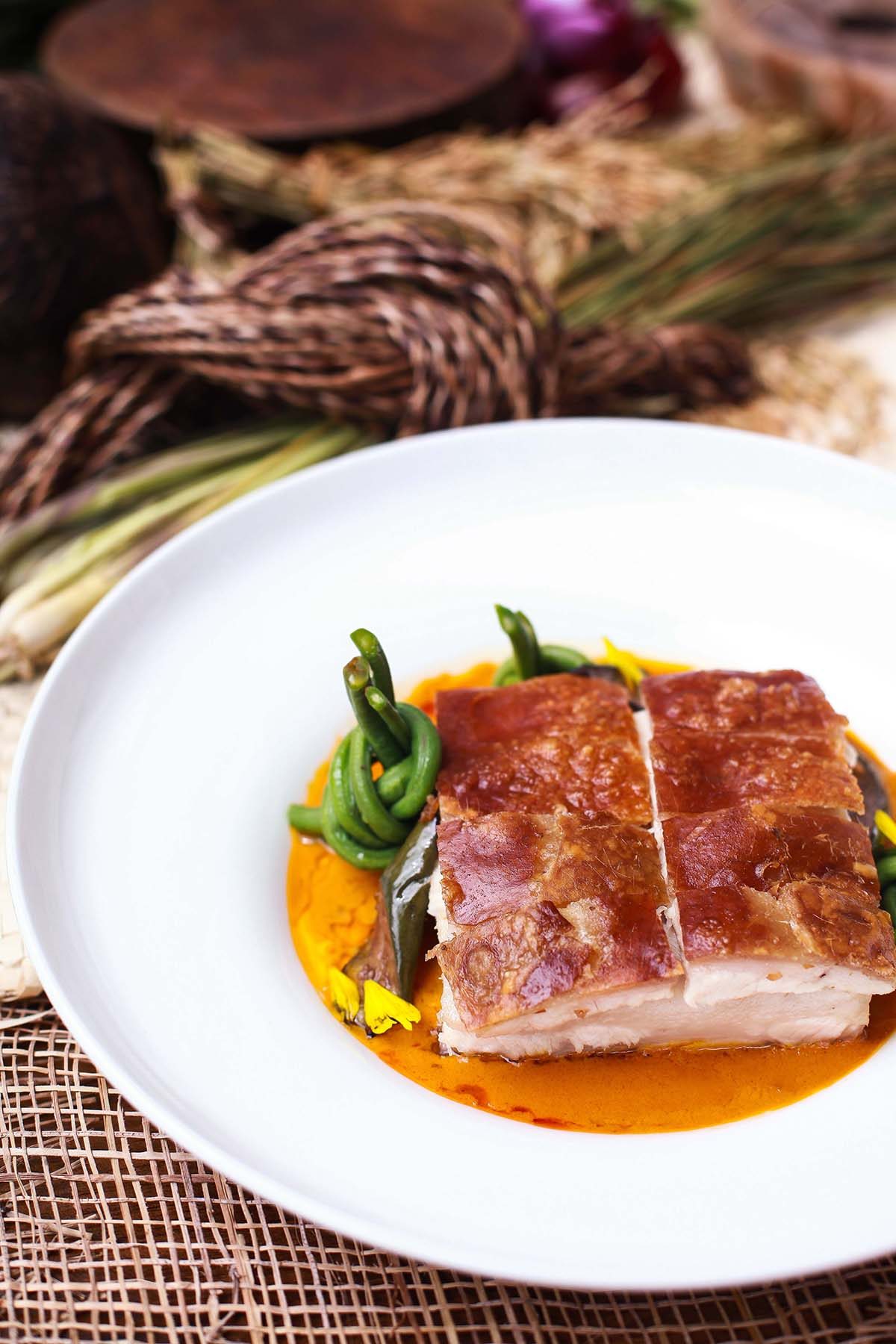 I want to put my name there that it’s my take on classic food. My training is French. So, I want to incorporate the technique and application to be different. Guess what? It’s well received! Like the tamales, it’s not your typical banana leaf wrapped that is very traditional. I placed it in a nice container and made it more flavorful and velvety. I think that’s the way it should be to make it globally competitive and to be more acceptable to foreigners.

My mission is really to correct or improvise, then turn it around and make it something more acceptable to everyone. Of course, may magtataas ng kilay (Of course, some eyebrows will be raised). Why are you putting macadamia or why are you putting truffle?

Food is very subjective. It maybe good to you, others may like it, but you cannot please everyone. How many dishes did you concoct for this festival? There is even a lechon that’s inspired by Luzon, Visayas, and Mindanao.

Sau: Before, I did a Kapampangan Food Festival here. Now, I want to showcase other parts of the country. Having said that, I want to maximize not only on the recipes, but also the ingredients being used in other regions: like the malagos cheese that I put in the lechon; Guimaras mangoes in the lechon and chicken inasal to represent Visayas; or, the sisig tamales from the north.

Like yung mga pinag-uusapan nila, “Ang sarap na ginawa ni chef na buro and tamales.” (Like what people talked about, “The buro and tamales made by chef is quite delicious.”) Tamales is an old recipe from the Mexicans brought by the Galleon Trade. When you change it in terms of presentation, the millenials would say, “Hey, this is not bad!” But, if you give the bad tamales they might say, “That’s my lola’s food.”

When I was in Paris, when I was living there, I would cook for my fellow chefs and I would serve pancit, nilaga, adobo, and they love it. They would ask, “How come you have this peanut sauce, noodles, or adobo?” Because food is a narrative, it’s a story. Those are heirloom recipes that bring you back to memory lane or recollection growing up or you relations to people.

Food is a good communicator, it binds people together, it draws their attention, and you introduce yourself and who you are. That’s the problem with Philippine cuisine: hindi natin alam kung paano natin ibenta around the world (we don’t know how to market it worldwide). What is Philippine cuisine? We cannot describe it in one word because it’s very diverse. It’s not a bad thing; it means we have a lot of elements of surprise or flavors. It’s just so difficult to equate but I think we are finding our way. One way of promoting Philippine cuisine is to love it and accept it. – Rappler.com

“Filipino Culinary Pride: Filipino Food Festival at Diamond Hotel” is ongoing at Corniche until July 1, 2018. For more information, follow @diamondhotelph on Facebook of Instagram, or call 528-3000 at loc. 1121.