Facebook Twitter Copy URL
Copied
Is working at Disneyland really the dream job everyone thinks it is?

Hong Kong Disneyland (HKDL) is currently prepping itself for Christmas, and considering that a fair number of guests during the holiday season hail from the Philippines, the park invited several media representatives to a roundtable discussion with two of HKDL’s lead imagineers.

We were introduced to Randy Wocjik, the park’s creative director; with over 25 years with the Walt Disney Company, it’s fitting that he has the charm and contagious liveliness of a character straight from the cartoons.

New to the team, and fellow Filipino Ceejay Javier is the go-to person in charge of all instrumental performances as the park’s music director. In contrast to Randy, he comes off as more reserved, with quiet enthusiasm as he syncs with his senior’s energy.

The floor is opened to an observation of the park’s cast members’ nationalities. As a repeat visitor, Ceejay’s confirmation that many of the performers in HKDL are Filipino is not shocking. What is interesting is the shared history between them. “A lot of the musicians here are Filipinos, and most of them worked with me in the past in Manila.”

“They’re very hardworking, and very talented. I always try to guide and encourage them to perform at their highest level,” he speaks of them fondly.

This opens up the discussion as to how HKDL is able to adapt traditional Disney culture to appeal to a predominantly Asian audience.

Aside from the talents of its cast and crew members, Randy believes it’s really about Disney’s philosophy. “For us, regardless if it was in Asia or not, it’s all about great storytelling. That’s what the Walt Disney Company is all about, wonderful storytelling,” he says emphatically.

There’s no set, definitive target market for them, it should be for everyone. The sentiment is reflected in Disney’s film arm with its efforts to diversify their featured characters and stories. “If you continue to try to raise the bar and make something really special, it will resonate with all of our guests.” 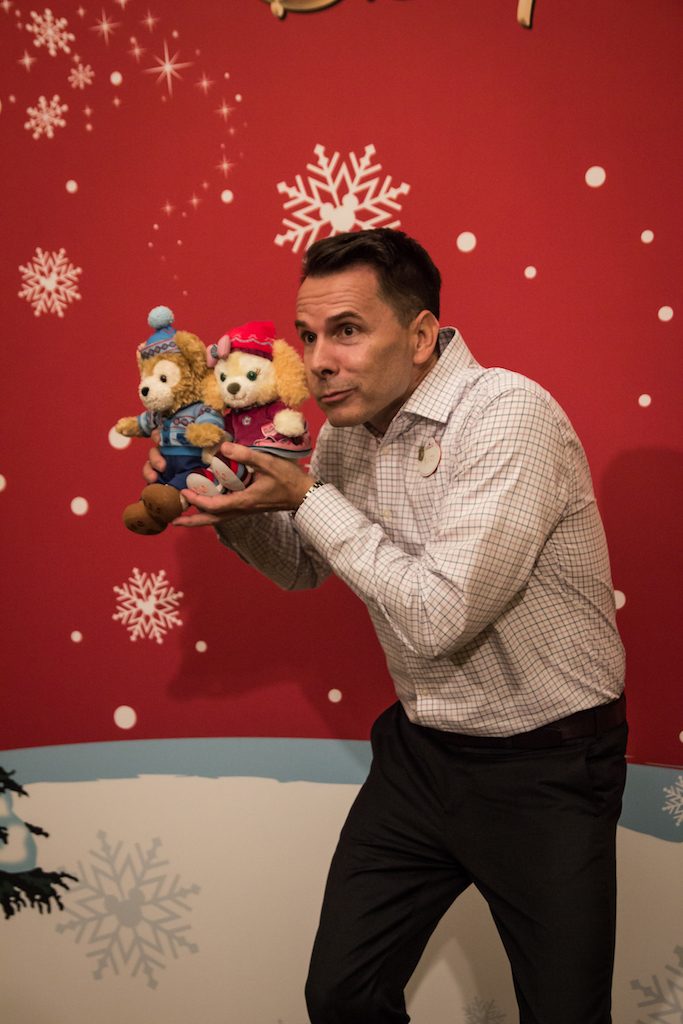 Ceejay, barely a year into his position, sums it up poignantly. “The beauty of Disney brand is that it transcends nationalities, it appeals to all walks of life,” he says. “It’s quite easy, actually, to entertain them with our product.”

With HKDL operating for over 13 years now, one would think that it’d be a struggle keeping things fresh. When asked how both directors handle overcoming creative block, Randy takes the floor using one of the park’s newest offerings as an example.

“We Love Mickey! is an 8-minute projection show along Main Street.”

The presentation, a tribute to the beloved mouse, is truly spectacular. The walls of several buildings are set aglow with scenes from his long career. “When you look at 90 years of Mickey, how do you condense and celebrate what an icon he is in 8 minutes? We had a smorgasbord, a huge buffet of all these things we wanted to put in the show, and that was the challenge!”

Disney’s intellectual property is vast, especially considering the lore from its newest acquisitions, the Star Wars and Marvel franchises. With all their respective teams constantly creating films and television shows, it seems that the pool that Ceejay and Randy take inspiration from is endless.

When asked what sets HKDL apart from all the other Disney parks, the more tenured resident answers with nothing but warmth. “Well, I’ve had the pleasure of working at other Disney parks around the world, and I’m not just saying this because I’ve been here 5 years, but I love everything about Hong Kong in general,” Randy shares.

“In HKDL, there’s something so special and unique about this park. From just the way the entire park is bathed in this gorgeous mountain range, and how it’s tucked in this beautiful island of Lantau.”

Often referred to as “the lungs of Hong Kong,” for its lush forest range and relative scarcity of residential developments, Lantau Island would be a tourist attraction even without the park. “Well, I’ve never been to the other Disney parks,” Ceejay answers back to a chuckling room, “but HKDL is quite intimate in a sense.” With limited time left with both of them, the last question asks whether they find working for Disney the dream job everyone thinks it to be.

Ceejay immediately replies with a resounding “Yes.” He pauses for a moment to gather his thoughts.

“You wake up, you go to work, but it’s not really work. You know why? They gave me the key to the music library, and you listen to all these timeless Disney tunes.” There is no argument; Disney music is distinct, nostalgic, and plays in the hearts of both young and old. ”I can’t think of anything better than being, in my case, the Music Director of the park.”

The same enthusiasm is shared by Randy, “I can’t believe I’m getting to do this.” He mentions that it is during Christmastime that he finds his work the most meaningful.

“Being away from my family that’s in the US – that the season is all about family and loved ones, it makes it even more special.” That kind of dedication, spreading happiness to families apart from his own is noble, and speaks to how much he values his position.

At the mention of family, I turn back to Ceejay for his insight, but he remains silent as the meeting comes to a close. The Philippine delegation thanks the Disney team for their time, and after an exchange of handshakes and thank-yous, we’re driven off and whisked back into our rooms at the Disney Explorers Lodge.

Later in the evening, I decide to mull over what I’d learned during the interview at a separate hotel. It is perhaps the universe’s answer to my wish of bumping into him, as I see Ceejay turn the corner. We start a short conversation, and I struggle to condense the current state of PH affairs at his request for news from home.

He then tells me that he’s waiting for his wife and son to arrive, and head off to dinner. Shortly after, I’m introduced to Louise – and tucked into his stroller, eyes blinking curiously, is their son Xylo. I was surprised to know that they relocated to Hong Kong with Ceejay, Disneyland providing lodging for all 3 of them. After our short conversation, they head off to find a table at one of the restaurants, and I say my goodbye to the Javiers. As they walk away, I realize why Ceejay didn’t feel the need to expound on missing his family; he has them here with him.

It’s a testament to the magic that Disney creates, seeing that father rediscovers his youth with the classics while his fresh-faced son discovers the wonderment for the first time; both of them living their respective dreams. – Rappler.com