Japan’s wagyu beefing up to conquer the world 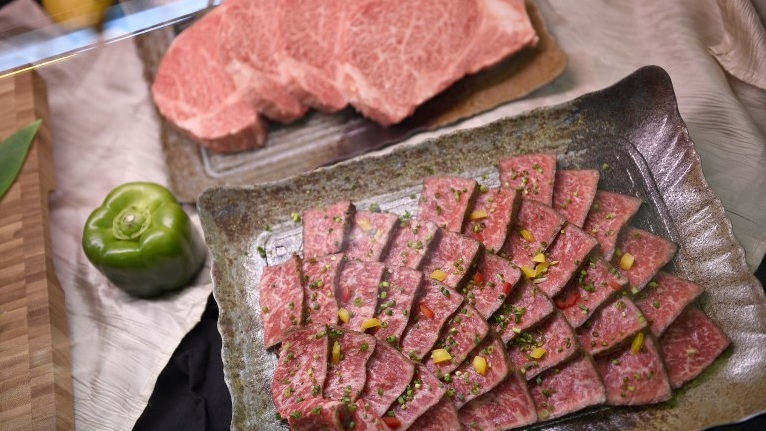 TAKAYAMA, Japan – In a lush field in the heart of the Japanese mountains, a herd of glossy black cows roam happily – prime examples of the area’s Hida brand of wagyu beef.

With consumption of the famed meat known for its melt-in-the-mouth tenderness and marbled fat on the decline in Japan, producers are looking overseas to boost sales instead.

The Hida brand might not yet have the recognition of famed Kobe beef, but overall the international profile of wagyu is on the rise.

The value of exports has risen more than 200% in the last 52 years – Hong Kong is currently the largest market.

About an hour from Takayama, a town that attracts tourists with its traditional wooden houses, dozens of cows owned by different farmers have free range across a 250-hectare plot leased by the local municipality.

They spend the warm summer months in the tranquil greenery and return to the warmth of the stables when the winter comes around.

There they give birth to calves that are the product of carefully organized breeding to protect the “purity” of each cow’s bloodline.

“The quality also comes from the feed,” he adds.

For cows bred for wagyu beef, that means 10 kilograms (22 pounds) of rice straw a day, to ensure the intramuscular marbling that gives the meat its characteristic look and taste.

Each cow spends the 30 months of its life cossetted and pampered, reared stress-free and under constant medical watch.

They are tagged electronically, in a system described as unique in the world, and every cow’s family tree can be traced back at least to its grandparents, if not further.

Some farmers pamper their cows by covering them in coats during the winter, feeding them beer, and even playing them classical music.

Producers in Takayama don’t go that far but that doesn’t mean there is much room for error.

“We never rest, we’re looking after them 24 hours a day, 365 days a year,” says Shuichi Mizobata, on the sidelines of a locally organized wagyu competition.

Cows parade in front of judges and are weighed and measured to determine which will compete at a national face-off that takes place every 5 years.

A Takayama cow won in 2002, in a victory that still sparks pride for the young Hida brand.

Wagyu cultivation dates back only a few decades, with most Japanese black cattle – the breed that dominates wagyu – derived from a single bull born 80 years ago.

“After the liberalization of beef import rules, we decided to put the focus on very high quality wagyu beef to differentiate our products from imported ones,” said Sota Kamihiro, an official with the agriculture ministry.

Producers have also struggled with the decline in beef consumption that started around 2000, over fears linked to BSE, and a shrinking number of farmers, with existing producers aging and leaving behind no heirs.

“The meat is sublime”

In 2013, the agriculture ministry set new export targets with the goal of reaching 25 billion yen ($228 million) in beef sales overseas by 2019.

The goal looks achievable, with sales already at 24.7 billion yen in 2018, a massive increase from 5 billion when the strategy was put in place.

And the explosion in exports comes despite the eye-watering expense of the product – the most prized portions of wagyu go for around 13,700 yen a kilo.

In Takayama, exports only accounted for 5%, or 43 tons, of the beef sold by producers in 2017, but that was already double the previous year.

The town has an abattoir that observes stringent rules and is one of just 4 in Japan certified to handle meat for export to the European Union.

Increasingly, producers are also securing halal certification for slaughterhouses – which number around 200 in total across Japan –so they can export to Muslim countries.

After slaughter, the beef is put up for auction, with the carcasses displayed behind glass alongside cards ranking them according to a precise system based on the meat’s marbling, color, texture, and the quality of the fat, according to director Mitsushi Kobayashi.

“The Japanese seek above all to reduce the blood and muscle in the animal, and to develop the fat, the opposite of us,” said French chef Lionel Beccat, who has a Michelin-starred restaurant in Tokyo.

“The meat is sublime, it melts in the mouth, there are different notes depending on the cows, some are floral, others nutty, others spicy,” he added.

“So the meat can be appreciated as it is, you just grill it and that’s it. It’s very Japanese, like sashimi.” – Rappler.com