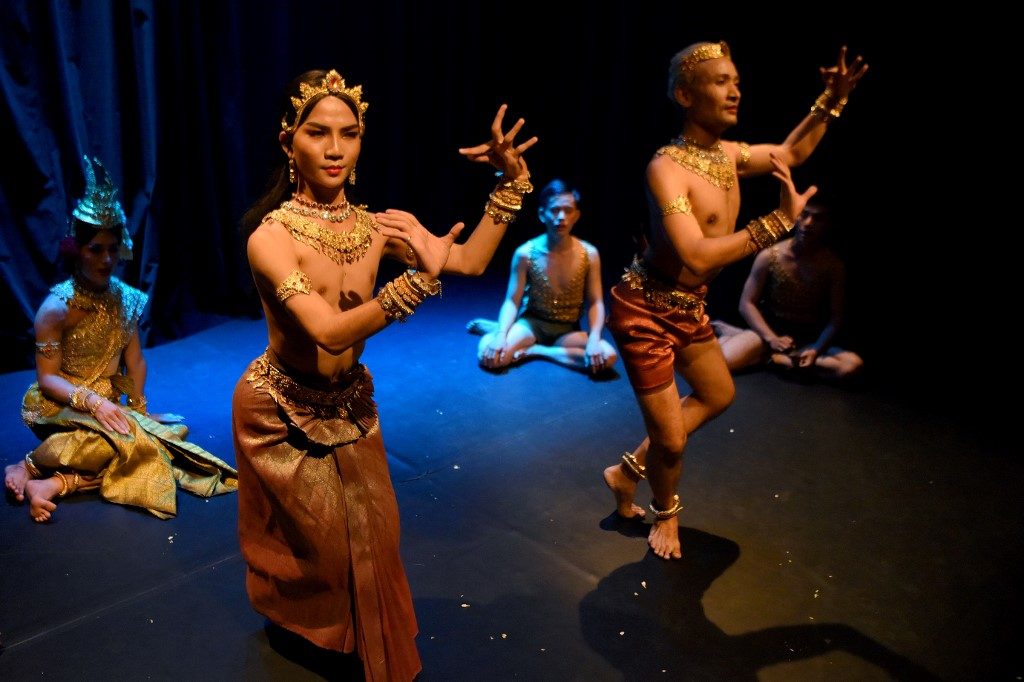 PHNOM PENH, Cambodia – Gold jewellery glistening, 6 male dancers from Cambodia’s first gay “Apsara” troupe swirl in unison on a dimly lit stage, their production a radical shake-up of a ballet form peformed by women for more than a thousand years.

“So our goal is to use art to change their mindset.”

He is part of Prumsodun Ok & Natyarasa, an all-male Apsara company trying to alter perceptions of the gay, bisexual, transgender, and queer community in Cambodia – which is still plagued by prejudice.

Bare-chested men wearing crowns and traditional sarongs glide through the slow, graceful movements of the Khmer dance, arching their hands back in poses normally performed by young women in golden dresses.

The soulful pop of Britain’s Sam Smith, who recently came out as non-binary, is interwoven with traditional Khmer melodies.

Apsara is a celebrated part of Khmer culture – dancers are engraved on the walls of the Angkorian empire’s surviving temples in Siem Reap – and founder Prumsodun Ok says some people are angry he is breaking with convention.

“But once they see the quality of the dancing… they can see our love and devotion for the tradition,” explains Prumsodun, a Cambodian-American choreographer.

Buddhist-majority Cambodia does not criminalize same-sex relations, but rights groups say the community still faces prejudices linking them to drug use and sex work and they are often caricatured on popular television shows.

“My goal is to create a more dignified and realistic image of what it means to be LGBTQ and do it in a way where we don’t become pigeonholed,” said Prumsodun, who is also gay.

The child of refugees who fled the murderous Khmer Rouge regime, Prumsodun – now 32 – grew up in California.

He moved to Phnom Penh in 2015 to work on a dance project exploring the role of sexuality in Apsara, but stayed on once he saw young gay Cambodians’ need for “a role model”.

The company is already making strides, and was even invited to perform at Cambodia’s Ministry of Culture, which company members hope is a sign of changing times.

“Just the fact that they allow us to do what we do is a gift already,” said Prumsodun.

Troupe member Dy Puthik tells AFP he joined first because of his love of dance, which he did not have to opportunity to indulge while growing up.

“Generally LGBTQ people have not been given value,” he said. “I now realize that I am doing an important thing.” – Rappler.com