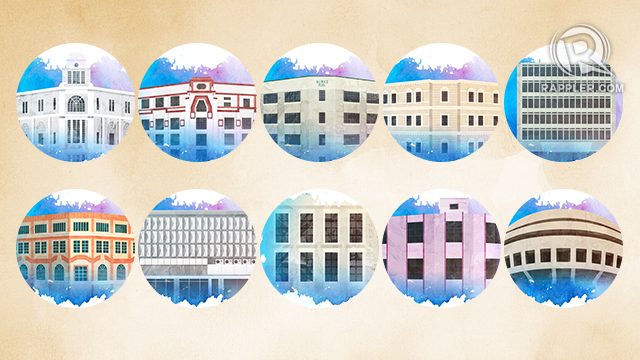 Somewhere in Manila, between a monument to Spanish Catholic empire and a marker of Chinese attachments, is the street named Escolta.

On one end, the Sta. Cruz church looms immovable as a tangle of people zips through and around it. On the opposite end, Jones Bridge and a view of the Pasig River – still and sparkling from afar – are framed by the colorful, intricate curves of the New Binondo Chinatown arch.

To get from one end to the other, Escolta requires only a short walk – but the street’s long history may compel you to take your time on this journey.

Escolta, after all, is one of the oldest streets in Manila, and once the center of commerce, which simply meant it was the buzziest street in the city.

Once upon a time, before the thing they called the internet, Filipinos could already connect to other parts of the world on this street. They could eat at a Chinese restaurant, buy spices from Latin America, or try on European shoes for size. TV and film studios once called Escolta home. It even once held the tranvia, an actual rail line that brought people from one part of the city to another in record time – now only a distant dream in these traffic-choked streets.

These days, Escolta is a choice location for the periodic street party, photo walk, or weekend market – but perhaps the most exciting thing about it even now is its past, still so present, in the buildings that stand on either side of the little street in varying degrees of revival or ruin.

These are just some of the buildings on this sleepy street: With a market of counterculture curiosities on the first floor, the building pays tribute to its past as the bustling Berg Department Store. On the same floor, there’s a quiet, cozy coffee shop called The Den, where the resident cat will command you with a look to open the door for it when it accidentally locks itself out.

The rest of the building is like a surprise box of treats – behind each door it feels like there’s something special waiting to be discovered. There is a co-working space where cinema icon Nora Aunor once held office (This fact is noted by a sign at the entrance). There is another room with closed doors and glass windows. If you can peer through them you can see bright neon creations, unmistakably artist Leeroy New’s. The people here are powered by natural light – all rooms have copious amounts of it streaming in from the art-deco windows.

Its bones are certainly old-school (and the slippery floors seem like they’re not made for modern shoes) but First United Building is as current as anything on Escolta can get. Opposite First United is the Regina Building, the one they call the Dowager. With its pristine white facade and opulent Beaux Arts build, it looks absolutely regal. Only the brightly-colored bank sign wrapping around its entrance breaks the neoclassical fantasy.

Unlike its neighbor, there are no hip coffee shops or co-working spaces here. On the contrary, its building directory lists a staid collection of inhabitants: logistics firms, cargo services, food trading companies, banks. One can imagine it’s a building populated by very serious people – but even on a weekday morning, hardly any humans can be seen walking in or out.

The building is as uninviting on the inside as it is beautiful on the outside, a model of unflinching formality – truly living up to its name. On the intersection of Escolta and Burke Street, it’s perhaps best known to those who frequent the area for the Mini Stop right by its entrance. The convenience store becomes one of the main sources of alcohol whenever the Escolta Block party rages. Meanwhile, architecture nerds will note that the building was also the site of the country’s first elevator, and that it was designed by Filipino architect Tomas Arguelles.

More than the beer, or the ancient elevator, the cream-colored Burke Building is a sight to behold, bringing a 1920s glamour to this intersection. Its clean lines and pared-down design brightens up the view of Escolta from here in direct contrast to the abandoned Leandro Syvel’s Department Store across it. Further down the street from the Burke Building is the Teoff Centre, also known as the Natividad Building. It’s another cream-colored neoclassical marvel, less remarkable, but more inviting at the same time.

Noticeable on the building’s facade is the sign of a shop called CBD Furniture whose tagline, oddly enough, says “your home will look 10 years younger!” – perfect example of the dissonance that echoes all along Escolta. From afar, the Madrigal building looks drab and gray – regrettably, even ugly – but a closer look will show you all the old-world details eclipsed by the gray paint and bright, back-lit signage that reads “YeeHome Corporation.”

If you can look past this, you’ll see the rounded awning, which gives way to a marble entrance, a patterned iron gate, and the building’s name rendered in Art Deco font. It’s dim inside, and like many of the buildings on Escolta, uninviting. There are customs brokerage companies, accounting firms, logistics and maritime services – and an air of glamour as faded as the signs on its exterior are bright. The sign that reads “Uno Seafood Wharf” may be the first thing you notice about this building, and the one that draws you in when you’re craving a bite after drinking at the nearby watering holes. But more than this Chinese restaurant – which is an institution in itself – the building also houses a beauty salon, offices, a drug store, and the Calvo Museum, where the building’s long history is summed up in displays of photos and memorabilia of old Manila.

Calvo Building was erected in 1938 as an office building but in November 1944, during World War II, it was used by the Japanese Imperial Forces and later destroyed in the Battle of Manila. It was rebuilt in 1946, and the museum was opened in 1994. Somewhere in between, it became the first headquarters of GMA Network before it was GMA Network.

Today, it still has one of the few remaining old-school elevators in the city – which makes the ride up to the museum feel like even more of a time warp. Every so often, the shop windows of this building turn into an art space – and understandably so. The building’s distinctive exterior is the perfect frame for a contemporary artist’s work. The makeshift gallery has housed art installations of various persuasions.

On a regular day, Panpisco Building projects a subtle eeriness, perhaps from the mannequins dressed in construction gear standing by the windows  (Panpisco is a safety technologies company), or the visible emptiness of the building’s upper floors. Designed by National Artist for Architecture Juan Nakpil, it was built in the 1930s, allowing Filipinos to watch both films and live performances. As moviegoers habits changed and audiences started going to in-mall cinemas, the Capitol shut down and was forgotten – until news of its planned demolition came to light in 2018. Now a ruin, the Capitol Theater has fallen so far from its former glory – but the elaborate Art Deco grillwork and bas-reliefs can still be seen. Beside Escolta’s humble Barangay Hall, the imposing Commercial Bank and Trust Company Building stands, looking like an alien mothership rendered in stone. Here is yet another Escolta building designed by a National Artist for Architecture, Jose Maria Zaragoza.

Built in 1969, it’s one of the newer buildings on this street filled with pre-war monuments, and perhaps the most intriguing building on this side of Escolta – with dark windows like that betray nothing of what’s inside. A visible sign says there’s a bank that operates there, but no entrances or exits can be seen – and security guards are loathe to reveal ways in, perhaps because they know that it’s a sight best beheld from outside.

On most days, Escolta’s past is more beautiful than its present. Like most of Manila, it requires some imagination and a good sense of adventure to enjoy. To get a full, satisfying view of each architectural marvel, you’ll need to walk backwards from the sidewalk onto the street  and in the process watch out for passing vehicles, which on a regular day are the only things moving on the street anyway.

Save for the weekend markets and parties, Escolta is still largely a sleepy street filled with mostly-forgotten gems.

But life still runs through the veins of this street – and it’s still there, for those who care to look. – Rappler.com