MANILA, Philippines – It was a night of thanksgiving and dancing as members of the diplomatic corps gathered to celebrated the 66th National Day of the State of Israel at the New World Hotel on Monday, May 5.

Israeli Ambassador Menshe Bar-On and his wife Eti celebrated with colleagues and the friends they made in the Philippines.  The Ambassador will end his tour of duty in July and will return to Israel for retirement.

He hosted various cultural events and even lent a helping hand to Filipinos affected by typhoons and other natural disasters, among them, Super Typhoon Yolanda (Haiyan). (READ: Post-Haiyan: Baby Israel born in mobile clinic)

Earlier this year, Israeli diplomats shocked the world when they did something that was never done before. They went on strike, forcing the closure of their embassies, to demand better conditions for embassy officials, employees, and their spouses.

Ambassador Bar-On was among those who spoke about the plight of Israeli diplomats to the media, and urged for the public’s understanding. (READ: Israeli diplomats’ strike grounds Filipino caregivers)

Through intense negotiations, the Israeli government gave in to their request, ending the strike. (READ: Israel embassies reopen worldwide)

Also this year, Filipina caregiver Rose Fostanes won in the first season of X-Factor Israel with Bar-On calling Fostanes as an Ambassador of the Philippines to Israel and vice versa, promoting both countries as a Filipina and Israel’s winner. (READ: Caregiver no more: Rose Fostanes to focus on singing)

For his part, Foreign Affairs  Secretary Albert del Rosario highlighted the friendship between the Jewish community and the Filipinos before the state of Israel was even established.

During World War II, it was the Philippines under then President Manuel Quezon who opened its doors to Jews fleeing the tyranny of the Nazis as other countries turned them away. During the voting for the establishment of the state of Israel, Del Rosario recounted how there was only one affirmative Asian vote – from the Philippines.

On a more personal level, the Secretary also recounted how his family also had a strong connection to the Jewish community. He narrated how his grandfather, Judge Simplicio del Rosario, found himself in Nazi Germany during Kristallnacht (Night of the Broken Glass) – a pogrom against the Jews in Germany and Austria.

Judge del Rosario left the country due to the violence and found himself on a ship where he met two Jewish women fleeing Europe. They told him that they had nowhere to go.

The Judge then offered them jobs in the Philippines so that they can start a new life, away from the racist tyranny of the Nazis.

The friendship between the two countries remains strong. With around 50,000 Filipinos in Israel, mostly working as caregivers, and Israeli businessmen setting up shop in the Philippines, people-to-people exchanges as well as business and career opportunities remain vibrant. 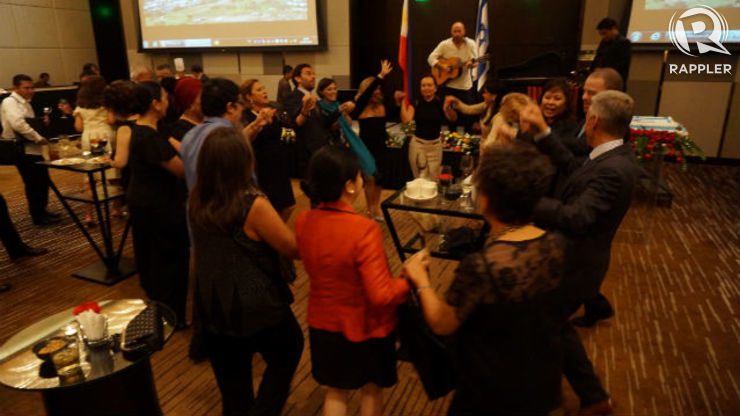 An update on the air agreement between the two countries will also ensure direct flights between the Philippines and Israel soon enough, bringing in more tourists to both countries. Israeli tourists get to travel visa-free to the Philippines while Filipino tourists enjoy the same privileges in Israel as well. – Rappler.com