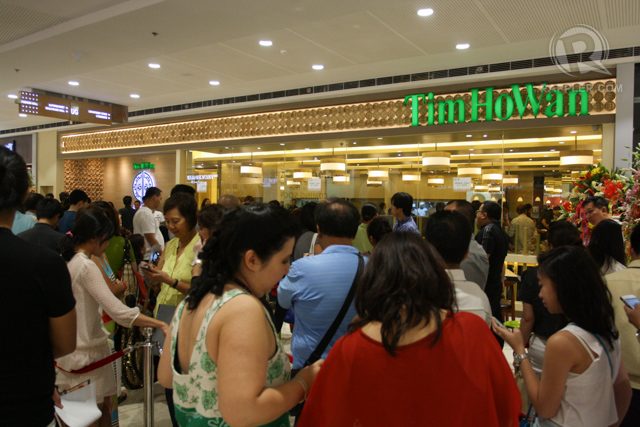 MANILA, Philippines – Most malls are known for something. Does it have great restaurants? The best clothing stores?

While SM Megamall is not really known as a dining destination, the mall’s management is slowly trying to change that misconception. Recently, they invited media and food bloggers to come and see the new and even the familiar dining establishments that set up shop in its new wing.

Rappler jumped on the tour led by foodies RJ Ledesma and Anton Diaz, and we’ll be sharing with you what we’ve found and tasted during the 16-stop food tour.

Probably the most anticipated restaurant opening of 2014 is that of this former Hong Kong hole in the wall, now cheapest Michelin Star-bearing establishment in the world.

The first Tim Ho Wan branch out of HK and Singapore opened on May 20 here in the Philippines. Enrico Dee, the franchise owner here in Manila, says the management is particular in maintaining the cheap prices, quality, and taste that the restaurant chain has been known for.

Dee reveals that they are planning to open a couple more branches, with one in Glorietta already underway. He says this will be followed by branches in Mall of Asia, SM North Edsa, and Lucky Chinatown Mall. Cinnabon started out in the US – in Seattle to be exact – and was the result of a restaurant company’s search for “the world’s best cinnamon roll.”
It eventually made its way to the Philippines, and now has several branches in major malls in the country, serving frosted and flavored cinnamon rolls.
3. Bono Gelato Did you know that there was such a thing as Gelato Univeristy? People behind Bono Artisanal Gelato went to Carpigiani Gelato University in Bologna, Italy where connoisseurs teach people how to make the perfect gelato.
From flavors like Malted Cookie Dough and Mango Sake, Bono makes sure that everything sold in the store is made from scratch and from fresh fruits and flavors, making your gelato experience healthy.
4. Kyochon Chez Karine is a French patisserie with an Asian twist – Japanese being the strongest Asian influence seen in its packaging and even product design.

The artisanal bakery has Karen Yang as its proprietor and head pastry chef. Yang was a former software engineer working abroad who made a huge life-changing decision just a couple of years ago – moving back to the Philippines to pursue her dream of having her own patisserie.

A must-try is their Muscovado Royal Pudding, baked and served in its own jar. Scoop all the way down to the bottom of the jar to get some syrup and eat it with the pudding that tastes a lot like flan but has a richer texture. Salon de Thé by French Baker offers afternoon tea and a selection of scones, sandwiches, and even chicken lollipops to go with it.
French Baker founder Johnlu Koa even shared how the new establishment serves tea imported from countries such as Sri Lanka and in-store made chocolate.
7. Gigi Custaroonery Is it a custard? Is it a macaron? What started out as a family recipe now made its way to malls, packaged in intricately designed, dainty boxes.
8. Osaka Ohsho From a small gyoza place in Osaka to a regional franchise. Osaka Ohsho started out with a simple menu of hand-made gyoza, ramen, and fried rice personally prepared fresh daily by concept founder Mr. Shinzo Fumino.
These days, they now have an expansive menu including different kinds of gyoza and the well-loved Sukiyaki.
9. Boqueria Three hundred years of Spanish rule over the Philippines had a great effect on the nation’s taste buds. And while the Spanish colonization may be over, there’s still an intimidating air surrounding their food because of how most restaurants charge for a plate of paella.
In Boqueria, a restaurant and chocolateria (yes, they also sell Spanish chocolate), Spanish chefs who take the lead in the kitchen say they are on a mission to make their cuisine less intimidating and more accessible to Filipinos by making classic Spanish favorites affordable.
Try their Cheese Paella with their sweet-strong Sangria (It’s okay even if you’re out on a working lunch. Just stick with one order) and have some chocolate churros for dessert.
10. Abé Abé is well-known for good Filipino food in the Bonifacio Global City area after opening a huge branch in Serendra a couple of years ago.
Now in Megamall, they’re eager to share what’s new on their menu – particularly their extra-tender Lamb Adobo.
11. 8 Cuts The name is a reference to the 8 cuts of beef used in this retaurant’s patty blends— chuck, rib eye, short rib, sirloin, brisket, hanger, flank and ox tail.

Come see their Blend Kitchen, an open kitchen that showcases the authenticity and freshness of its burgers offering a full view for customers to appreciate its unique process of “blend-grind-press-griddle-build.” A restaurant that started out in Shanghai serving Taiwanese food, Lugang has been known in Manila as a place for Xiao Long Bao – those steamed buns that contain meat and tasty soup inside.
But don’t confine yourself to just the dimsum. Try the Shrimp Balls with Mozarella Cheese and some coffee. Yes, coffee. Lugang serves Italian roast blend coffee through an Arabic machine. Just watching the golden contraption churn out your brew can instantly make you feel like royalty.
13. Vikings Another familiar name that opened in the mall is Vikings – the buffet restaurant that started out in Pasay and now has 5 branches. Owners say that if you’ve tried at least one of their branches, it’s no reason not to visit the others as each has a different look and has its own executive chef bringing in a different twist to the dishes they serve.
14. Pink Berry From Cali with love. Pinkberry is another international brand that came to Manila. They serve non-fat and low-fat flavors, making it a good alternative to ice cream and other desserts if you’re trying to watch your weight.
15. Baked by Anita Baked by Anita was a Mercato favorite known for its mini cupcakes. But another must-try is their series of Savory Pies. Photographed above is the variant with mushrooms, guyere, and white truffle oil inside.
They are delectable and can be perfect for merienda.
16. Lucca Bakery And the last stop is Lucca Bakery which serves pastries and coffee that are just perfect to end a long day of filling up your stomach. Try their Banana Walnut Sticky Bun and pair it with your favorite brew (they have a good selection of coffee ranging from espresso to hazelnut blends).
Have you tried any of the restaurants above? Tell us your favorites in the comments section below. – Rappler.com
The Mega Food Tour is also open to the public. Those interested to join the tour will have to post a foodie photo on Instagram (with a locator and tag @smmegamall and #MegaFoodTour) taken in one of the restaurants inside the mall between May 23 and June 3.
All photos by Manman Dejeto