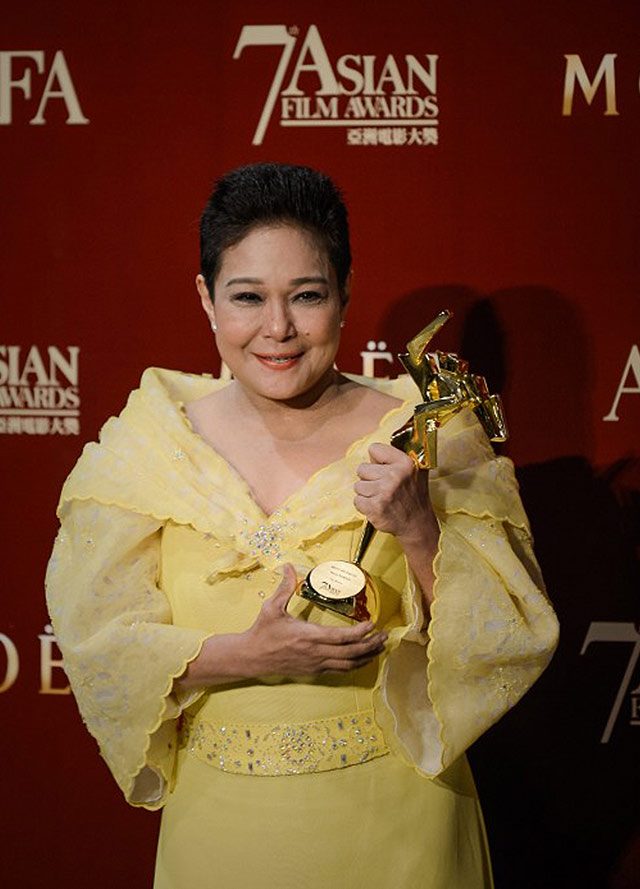 Facebook Twitter Copy URL
Copied
Throughout the shifts and changes in our culture in the past decades, Nora Aunor has managed to produce riveting, complex performances. Take a look back on this in light of developments regarding her exclusion in the final list of National Artists

Of whether Nora Cabaltera Villamayor, legally a senior citizen of the Philippines and permanent resident of the U.S., is an accomplished artist there can be no doubt. One might inspect the record of her multimedia accomplishments – as recording artist, television performer, stage actress, concert act, and film producer and thespian – and concede that she may have excelled in many, if not most, of these areas; one might even be a serious observer of any of these fields of endeavor (as I have been) and assert that no one else comes close, although many certainly aspire to her level of achievement.

Not surprisingly, the rejection by President Benigno Aquino III of the National Commission for Culture and the Arts’s endorsement of Aunor has occasioned a number of impassioned and articulate responses, starting with social networks, by now filtering through mass media, and inevitably destined to land in scholarly discussions, with the Philippines’s own major indexed humanities journal, Kritika Kultura of Ateneo de Manila University, slated to publish a special section early next year devoted to her. (Personal disclosure: I am in charge of this specific project, as forum editor.)

The nature of the reactions should not surprise anyone attuned to Philippine popular culture: The late-1960s working-class devotees who demanded for, and got, the teen idols they wanted have since grown along with them, many gentrifying and positioned in various capacities all over the globe.

It would have been instructive for the president’s culture team to have looked into the origin of what National Artist for Literature and Magsaysay Awardee Nick Joaquin described as a phenomenon, in one of his landmark journalism articles. For way before the 1986 middle-class people-power revolt that restored the oligarchy that Aquino effectively represents, an earlier, limited, though genuinely working-class form of people power, comprising mostly rural migrants working as factory and domestic labor, discovered the pleasures of pop-culture consumerism and ignored the dictates of the then-already enfeebled studio system of the so-called First Golden Age of Philippine cinema.

Rather than flock to the presentations of the typical European-featured and bourgeoisified talents then still being insistently launched by the major studios, the new urbanites, still capable of earning disposable income without seeking overseas employment, used their peso-votes to signify what types of idols they preferred.

Today’s intellectuals replicate an error of historical interpretation when they position Aunor and her teen-star rival, Vilma Santos, as belonging to the native-vs.-mestizo division that observers during that time believed was at play: although Santos first emerged as a child star during the waning years of the Golden Age, her fairness did not conform to the anti-Asian requisites of the time; grown-ups with distinctly Oriental features would have been relegated to serious secondary roles as male villains or femmes fatales or, at best, comic roles (where, instructively, the biggest star, Dolphy, had to suppress his Chinese surname).

Hence the masses’ new choices represented iconographies long withheld by the elite-controlled studio system, with the two biggest stars no longer male, and either morena or chinita (as their types used to be termed). By the arrival of the 1970s, the more Western-looking types accommodated this new demand for transformative appearances by exploring unusual options, including the pornography genre now remembered as bomba – also a reference to then-emerging student and labor unrest.

Since then this social experiment in discovering new types of media performers for popular consumption has either ended or changed, depending on what perspective one opts to adopt. East Asian-type candidates have managed to swing the door wide open, thanks to the example initiated by Santos and followed through by the middle-brow Chinoy-ethnocentric efforts of Philippine cinema’s most successful producer, Lily Yu Monteverde. But proof that this progressive window has long slammed shut lies in the fact that no other brown-skinned female star has emerged since Aunor.

To confound matters for the race- and class-conscious arbiters of social acceptability, Aunor’s Otherness was too close for comfort to her mass adulators’ condition – i.e., like them she was born poor and far from the capital city, enduring the then-standard harsh treatment reserved for those perceived as unable to call on socially influential contacts for protection, cursed with disproportionate ambition and fated to rely on wit, talent, and industry to attain her dreams. Not surprisingly, for the period of what might count as her on-the-job internship, she displayed an earnest studiousness, carefully enunciating her song lyrics and delivering over-rehearsed renditions of even the most casual lines of dialogue and investing whatever spare funds she had in art or period film projects that baffled her fans and accounted for her occasional impoverishment (by movie-star standards).

Nevertheless, when her artistic maturity had peaked, roughly toward the close of the 1970s, the fruits of such unmatched discipline and struggle went on glorious display and earned her an entirely new generation of followers, many of them academically trained in cultural and media appreciation. I remember suspecting her then of finagling her performance record by paying attention to only her serious projects (as other serious performers and directors were wont to do), and watching the several potboilers she appeared in during her many periods of financial difficulty: to my amazement, each one, without exception, was stamped with a level of expertise that performing arts majors would have killed for.

This background also helps explain her disdain for the trappings of social respectability, having realized (as the most serious artists do) that the widest range of experiential possibilities can always be harnessed in the service of interpretive craft. Small wonder that when she had the assurance of serious coverage during her current career resurgence, she spelled it out for the world, without apologies: chemical dependencies, multiple (including same-sex) partners, neuroses and anxieties, an inexplicable wanderlust, regret in the innocence of the now-lost past and hope in the uncertainties of the future. It was a source of amusement for me to see her fans scrambling to rationalize her statements, with a few of them abandoning their devotion to her because of their fundamentalist religious beliefs.

Less amusing was the spectacle of a supposedly enlightened presidential administration decreeing, in effect, that it did not want to be represented by such a powerfully transgressive figure. Its ignorance of the artistic temperament gets exposed when we look up the list of names who had already made it to the ranks of the country’s officially endorsed masters and see that the best among them had made use of similar methods of exploring truths and realities. The kind of sensibility that counts a public record like Aunor’s as contaminated by her less-than-“exemplary” lifestyle encourages medieval institutions like the Catholic Church to attempt a takeover of official cultural functions; worse, it plays into the dangerous oligarchic fantasy that a commodified, infantile, unexceptional mass culture is the perfectly satisfactory consequence of a wholesome moral existence. – Rappler.com

Joel David is Professor for Cultural Studies at Inha University in Incheon, Korea. He was founding Director of the University of the Philippines Film Institute and maintains an archival blog at Amauteurish.com.

This story was republished with permission from The FilAm, an online magazine for FIlipino Americans in New York