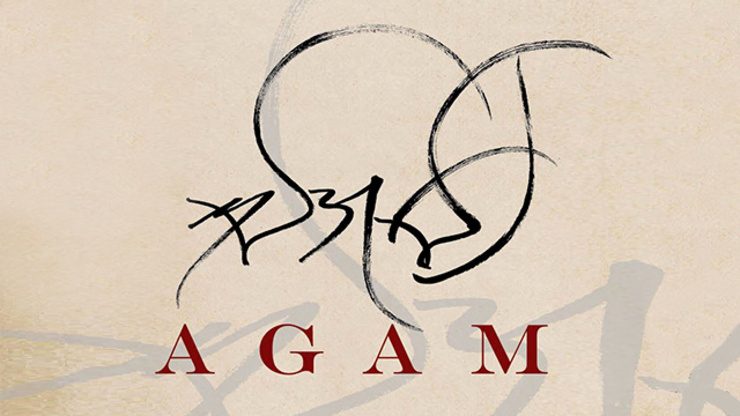 Facebook Twitter Copy URL
Copied
No technical terms and jargon here. Within each literary piece, accompanied by moving post-distaster photographs, lies the invitation to speak, to think, to learn from the past even as we move to the future

Help is arranged, then extended. Everyday heroes spring into action. In the process, reflections on roles come to pass. Using what skills you have, how can you best help a cause? As you look forward to the future, there is much to remember about the past.

A new book called Agam, recently launched in the Philippines, aims to create discussion, raise awareness, and call others to action with regard to climate change – all without saying those two words.

The book features 8 languages, 24 writers, and 26 images, and aims to call for action and create discourse about global warming.

And because this is a carefully curated literary anthology crafted by some of Philippine literature’s distinguished writers, each piece carries with it its own living, beating heart. 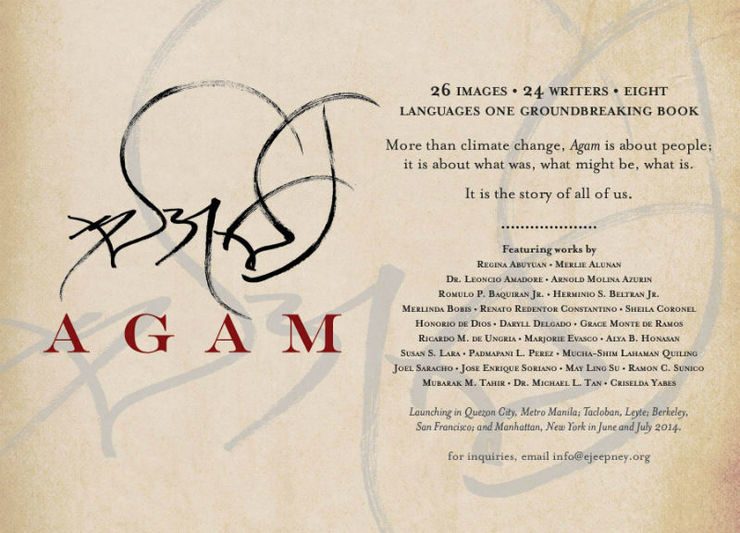 Agam-agam in Filipino means “foreboding” or “premonition,” which highlights a major theme in the discussion of climate change. The possibility of disaster has never been more threating, especially after the events of typhoon Yolanda.

Yet despite this uncertainty, there’s learning to be done – about the past, where we were, where we are today, which will be a memory come tomorrow.

And this is when the root word itself comes into the spotlight: “…it is agam, the root, that provides the very core and breadth that this book requires to capture the publication’s singular purpose, because apart from disquiet and doubt, agam also means a memory of the past, and the ability to think,” writes Renato Redentor “Red” Constantino in the book’s introduction. 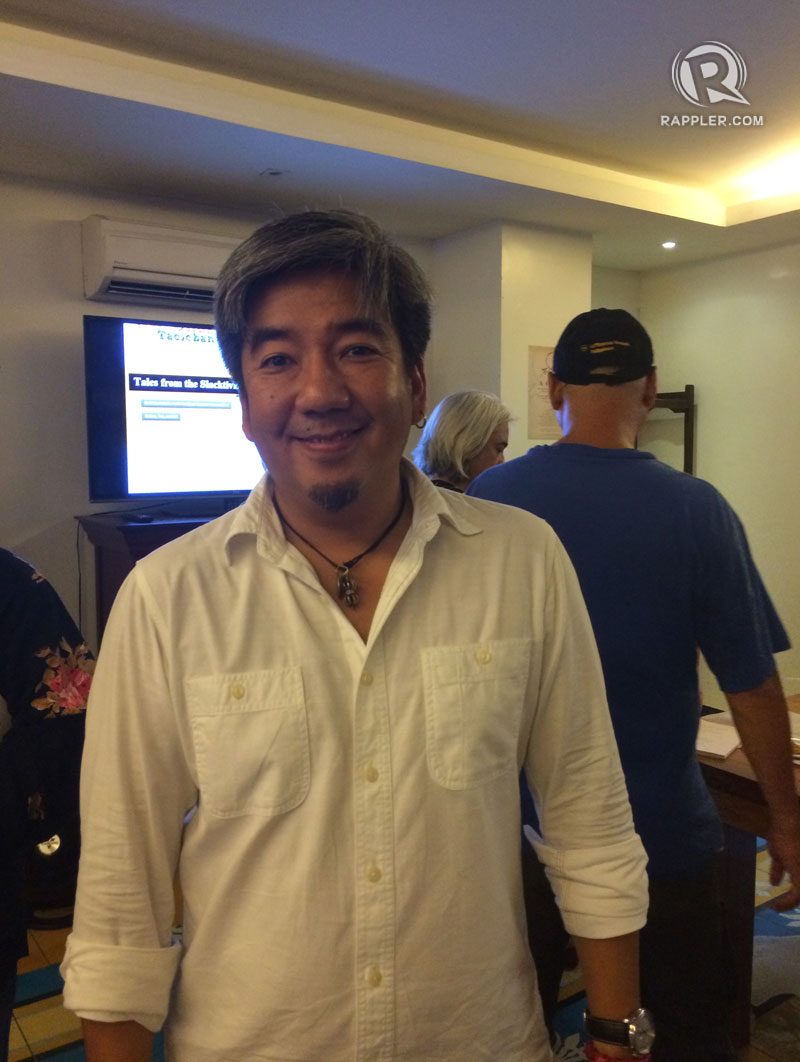 In 2011, the idea for Agam was conceived by Constantino, an environmental activist, and Regina Abuyuan, a journalist and editor, after looking at a photo exhibit in the senate that showed pictures post-disaster.

Around two years later, writers who joined the project were given prompts in the form of portraits by Jose Enrique Soriano, which were taken from around the Philippines.

These portraits, which showed Filipinos facing climate change, accompany the works in the book, part and parcel of the storytelling process of the entire project.

Prior to helping spearhead Agam, Constantino mainly worked with the Institute for Climate and Sustainable Cities (ICSC), and campaigned against climate change.

He said that he would often feel frustrated at the public’s lack of involvement with climate change. He said he wanted to veer away from wooden jargon and facts and figures. Constantino said he wanted an approach that would elicit more of a response. “We’d like the book to send a signal to the literary community. It’s time to get involved.”

He said that greater reflection and sustained action are needed to adequately respond to climate change. He also said he believed that action is an expression of citizenship, solidarity, and urgency.

He authored a piece in Agam titled “Weather.” Constantino said he used creative non-fiction as away to bring in the fact that this issue has been with the public for a long time. “The way I tackled it was to employ a bit of searching because it [“Weather”] doesn’t conclude things for the reader. It actually raises more questions [about climate change].”

He said that many pieces in the book talk about what was happening before and what is happening now. He said that like the title, Agam, there is a thread of uncertainty that faces all of us when concerned with the issue of climate change.

Abuyuan said that because of ICSC’s sideways approach to dealing with issues that she would like people to read the book and realize that climate change isn’t just about disasters. “It doesn’t happen to just a family in Tacloban, it can happen to you if you don’t do something about it now.”

“I think by telling good stories and not just making [Agam] about victimization, we might be able to learn something,” she said. 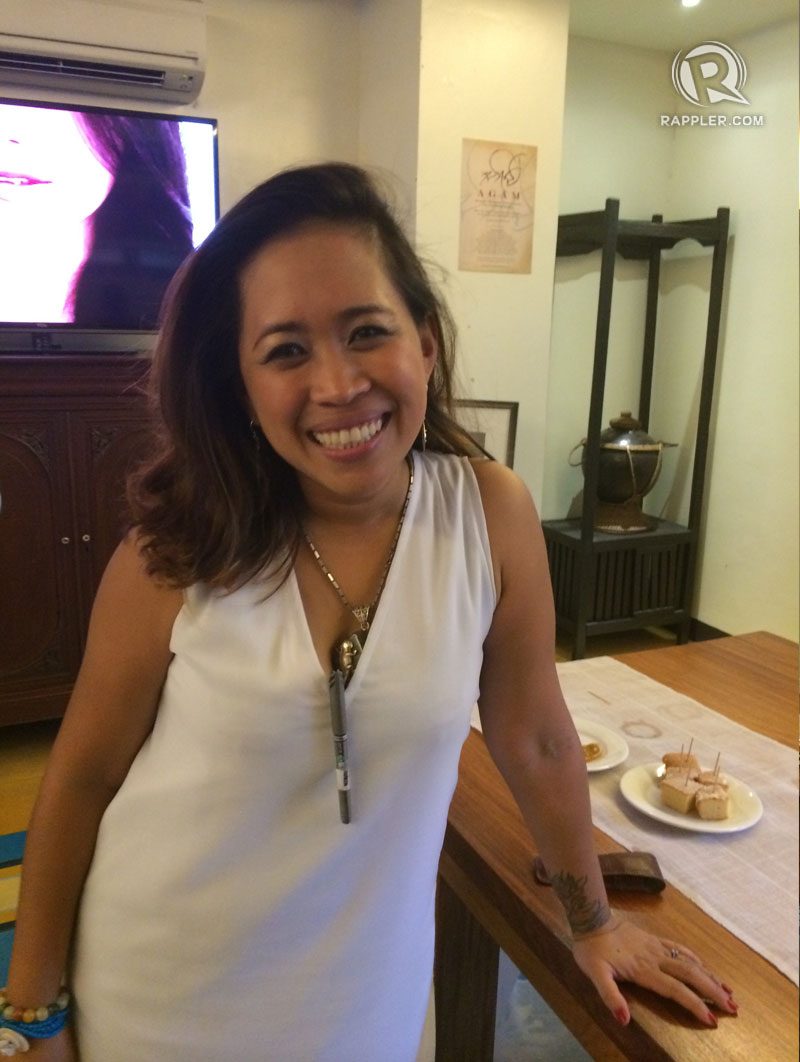 Abuyuan said that she feels that the meaning of the word “agam” is also spiritual. Abuyuan said she believed that to really understand the meaning of “agam,” a person would need to be more attuned to the world around them. “If you don’t care or don’t want to care about what’s happening around you then you probably won’t get it.”

She contributed a story to Agam entitled “One,” which is written from a dog’s point of view. The dog in “One” tries to keep her owners from the danger of Typhoon Yolanda, but the owners don’t listen. The lesson that Abuyuan said that the dog imparts is to listen and feel. To “taste,” “sniff,” and “see.”

However, Soriano said that when taking the portraits used for the prompts that he had no real method to choosing subjects. Soriano said there was no agenda and that he simply let loose and went with people whom he just found interesting.

When asked if he saw a theme with the pictures Soriano said it was about ambiguity and uncertainty. “Everything is ambiguous, which I believe is what climate change is. It hits everyone… You could be some big ass guy in Makati or some poor schmuck in Tacloban and if it hits you, it hits you. There is no middle ground. That’s the nice thing about this project – ambiguity,” said Soriano.

Arnold Azurin, an anthropologist and writer, said that he used the photo prompts as a tool. “It’s the photos that are supposed to trigger us into mining our imagination. There is no storyboard.”

Azurin wrote a piece in Agam titled “Agayayos.” With this piece comes a subtitle: “From Ilocano, as water down a river, or blood in the veins, memories in a lifetime.”

Azurin said that after looking at his portrait prompt, he tried to express a world view using different memories. He said that Agayayos is a place; it’s the highest part of the highway before one reaches Vigan. Azurin said that it was used as a lookout point in ancient times for trading ships.

To contrast with the past, Azurin said he wrote how Agayayos is used now to see changes in weather. “You can see the changes of the weather in the landscape because it’s the highest point talaga.”

Azurin said that he noticed that a lot of the writers were extracting meaning from the portraits and putting that into their work. Comparably similar to how “things [to look out for with climate change] are embedded in the landscape.”

In Agam, different voices discuss perspectives on climate change, present thoughts and ideas in relatable ways, and bring the issue that much closer to home.

Only 1,000 copies of Agam were printed. It will be available in branches of Powerbooks and National Bookstore throughout the country. – Rappler.com