Feb 10, 2015 9:51 PM PHT
Rome Jorge
Facebook Twitter Copy URL
Copied
A closer look at several works exhibited at the Art Fair, a joyous celebration of Filipino art and in some ways, an exploration of the macabre and whimsical

It was like experiencing the celebratory air of Día de Muertos, Mexico’s curiously merry Day of the Dead festival where skull figures in all sorts of colorful costumes and sometimes comical poses decorate wall, corner, and walkway. 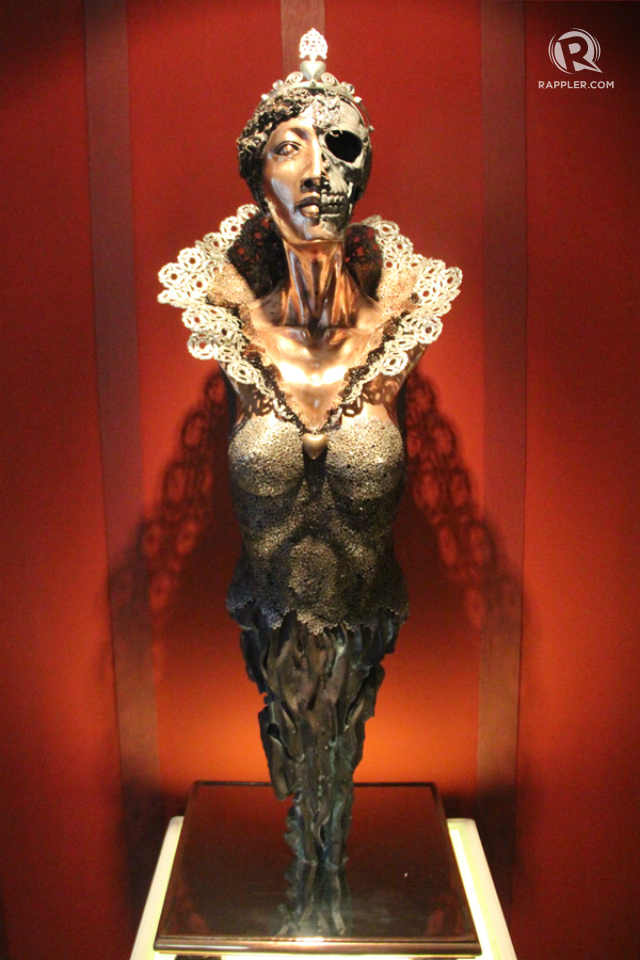 Like the Día de Muertos, families came to view the macabre yet wondrous creations. Except instead of people joyously comemorating with loved ones who passed away, it was Filipinos from various art backgrounds who came to celebrate the very best of Philippine artistry. This was Art Fair Philippines 2015, and it was fantastic.

Now on its third year, the Art Fair was held from February 5 to 8 once again at the Link building at the Ayala Center where two parking floors were temporarily transformed into art spaces.

This is but natural, especially after the works of young Filipino artists began commanding record-breaking prices Christie’s and Sotheby’s the past few years, both upending and turbocharging the local art scene. But for most people, they came to see art, not investments.

There was a bewildering array of art movements, themes, and mediums represented. Cynics may suspect a deliberate attempt to supply what the art market currently demands. But as art history illustrates, artists of the same milieu often naturally reflect the world they inhabit together, hence the similarities. Nonetheless, when many of these works are regarded individually, their worth is apparent.

Two untitled sculptures by Jordan Mendoza for Crucible Art Gallery that featured women provocatively peeling their skin from either their pubis or their anus to reveal muscle and sinew, achieved a similar macabre effect through alternative visual means. 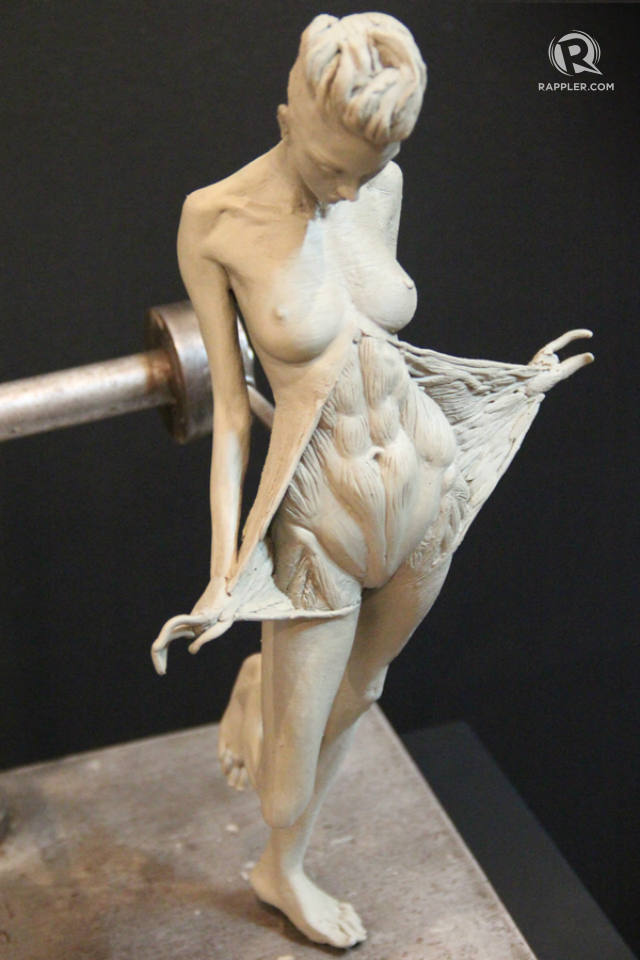 On the other hand, Mike Adrao’s Camouflage, featuring an array of what seems to be baroque filigree, upon closer inspection reveals a detachable arthropod each festooned with a skull.

And though many young artists such as Ross Jaylo, whose oil on canvas Rebirth for CANVAS featured his trademark skeletons, the use of such imagery was not confined to just the very young.

Even the masterful Daniel Dela Cruz’s Alice in Wonderland-themed mixed metal sculpture collection Curiouser and Curiouser for Art Verite Gallery imagined one of the The Queen of Hearts as partly skeletal.

There is of course the European gothic tradition of memento mori, meaning “remember to die” in Latin, that reminds one of mortality. Today’s people, who live in this age of terror where even noncombatants are targets, be they artists or patrons, can readily identify with the sentiments of their gothic counterparts who lived under the specter of the Black Plague. 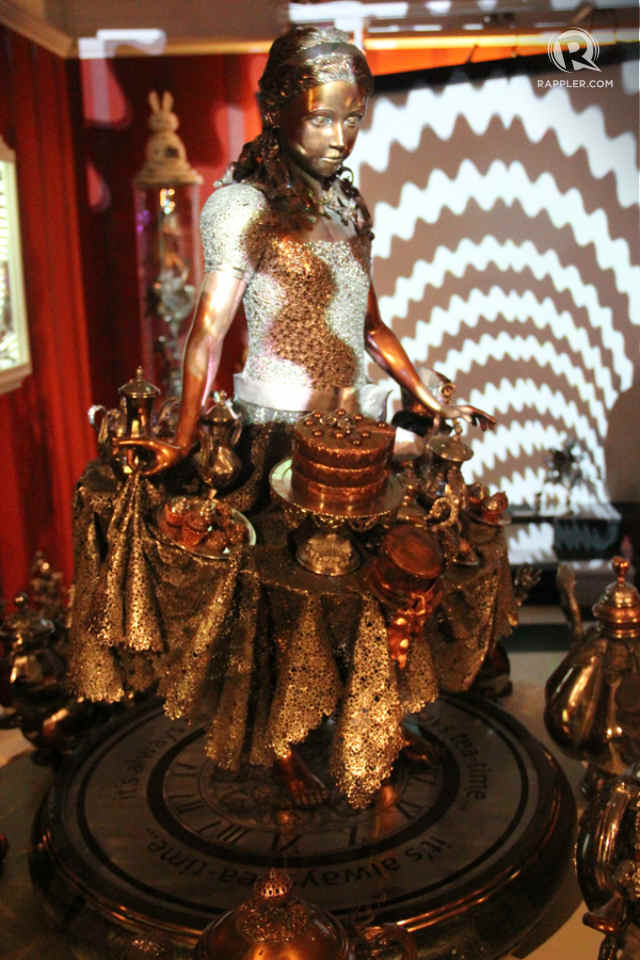 There is also the concept of counterpoint. One way to add contrast against pop culture banality and girlish innocence is to add a touch of macabre.

Add a deathly skull, grotesque tentacles, or a pentagram to a cutesy doll or cartoon character and the artwork seems edgy, meaningful, and deep. This also appeals to generation that never outgrew collecting dolls, and toys watching cartoons, or playing games, but also never outgrew heavy metal and punk subculture or monster sci-fi movies, and now has grown up to have the purchasing power to collect art.

From EJ Cabangon’s oil on canvas Donald D. for Michael Janssen to Louie Cordero’s painted resin sculpture series Meta for MO_Space, many works had a touch of whimsy that seemed to further highlight the macabre and grotesque. 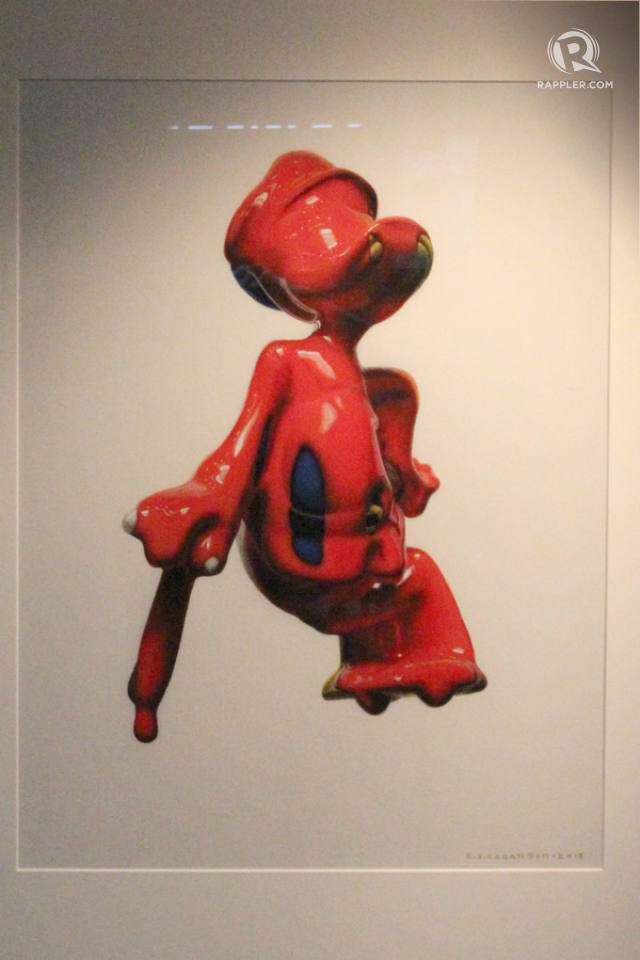 One eye-catching collection was Iya Consorio’s Evening Dress for Secret Fresh, that came with a story of a girl who hid during the nuclear bombing of the Japanese city of Hiroshima in the Second World War, only to find herself transformed into a tentacled vampire after wearing a certain dress. 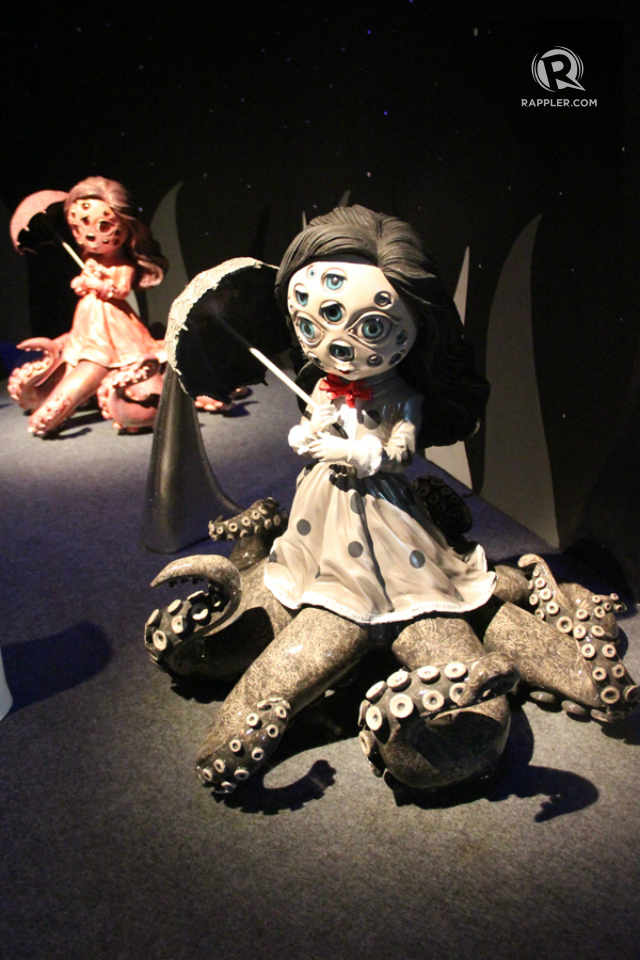 Daniel Dela Cruz’s aforementioned Curiouser and Curiouser collection was a tour de force reimagining of the Alice in Wonderland fairytale, which, according to Dela Cruz, eschews the Disney version.

But though many dreams are in black and white, each person’s nightmare and fantasy is unique, as the talented artists of Art Fair 2015 proved.

Mark Aran Reyes’ White, a four-painting collection for Nunu Fine Arts, was sold out immediately, and for good reason. Sublime with its wide expanses of white and flooded horizons, to gaze upon his paintings is to stumble upon a stranger’s dream and be silenced by awe. 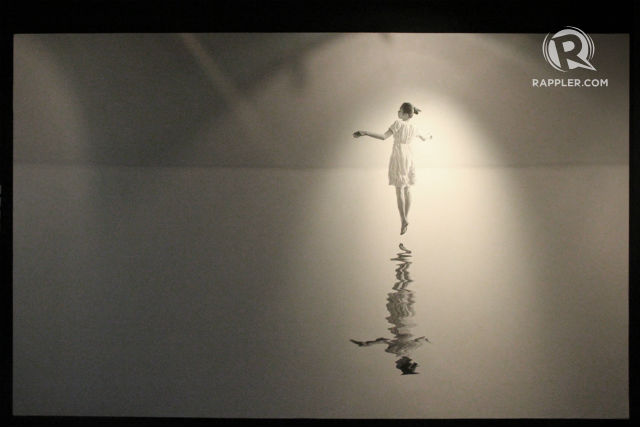 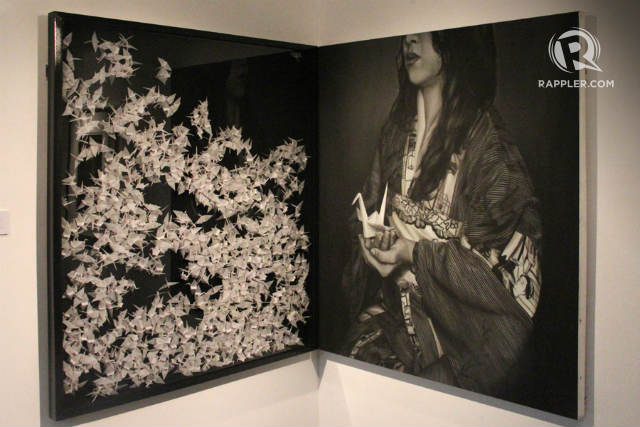 To see Francis Arnaez’s oil on canvas The Sprit is Willing But the Flesh is Weak for Avella Art Gallery is to stare into a shattered reflection, both revelatory and accusatory. 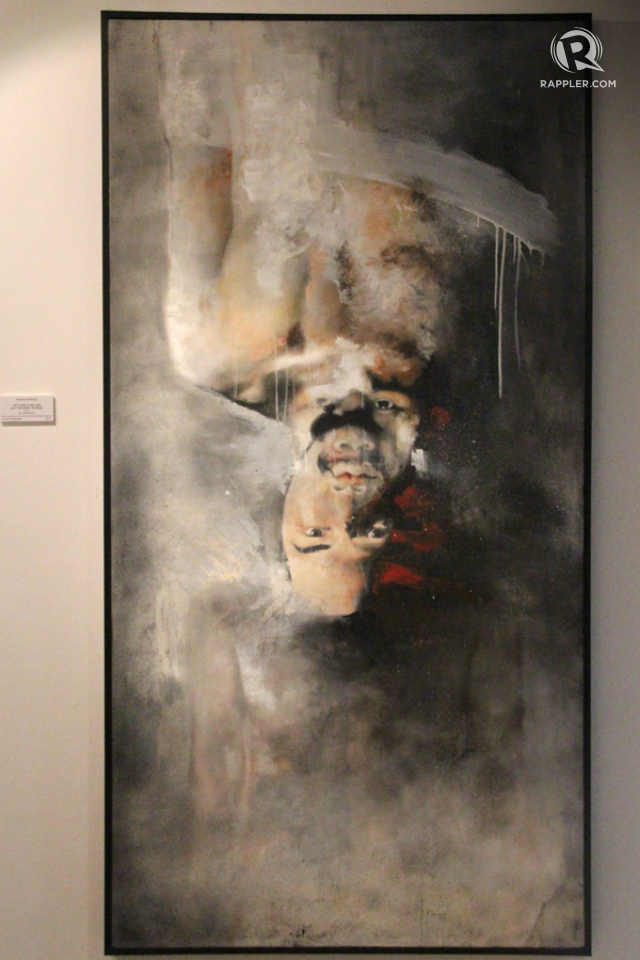 There is also the aforementioned Rebirth by Ross Jaylo with his trademark use of  a monochrome skeleton with splash of color, this time a Koi. 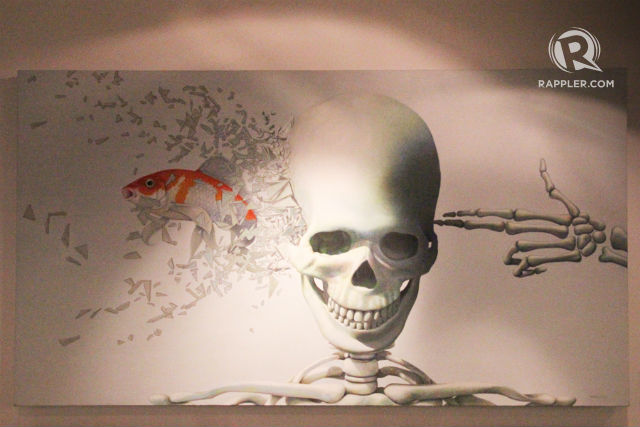 Present once again were husband and wife, artists Elmer and Plet Borlongan for Boston Gallery. Elmer’s painting, I am Seeing Things, once gain seamlessly fuses surrealism with social realism with its scenes of the common man’s dreams.

Also back was Norberto Roldan with his trademark compartmentalization of found vintage objects with The Unbearable Whiteness of Beauty for Taksu Gallery. 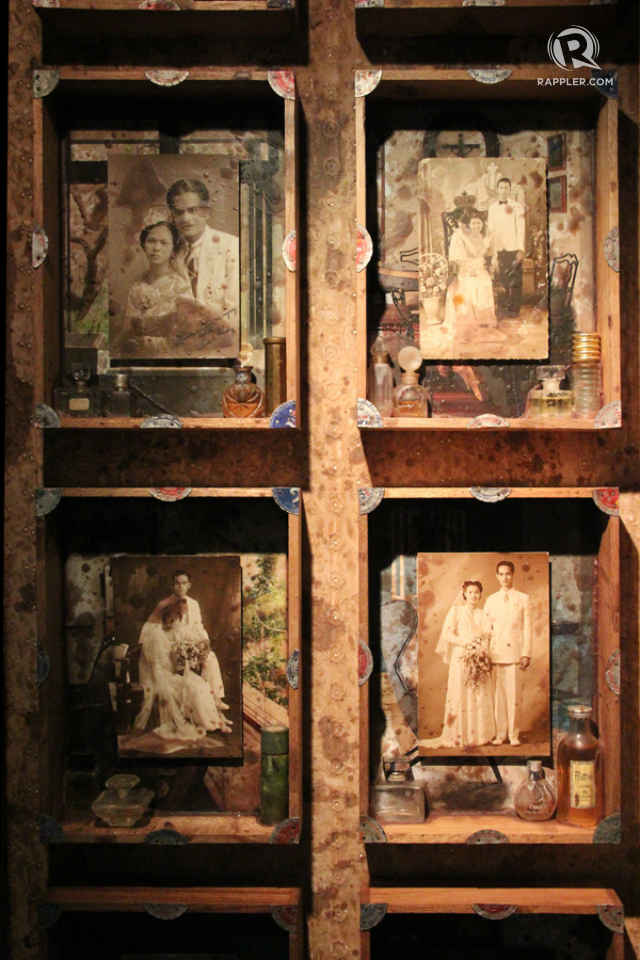 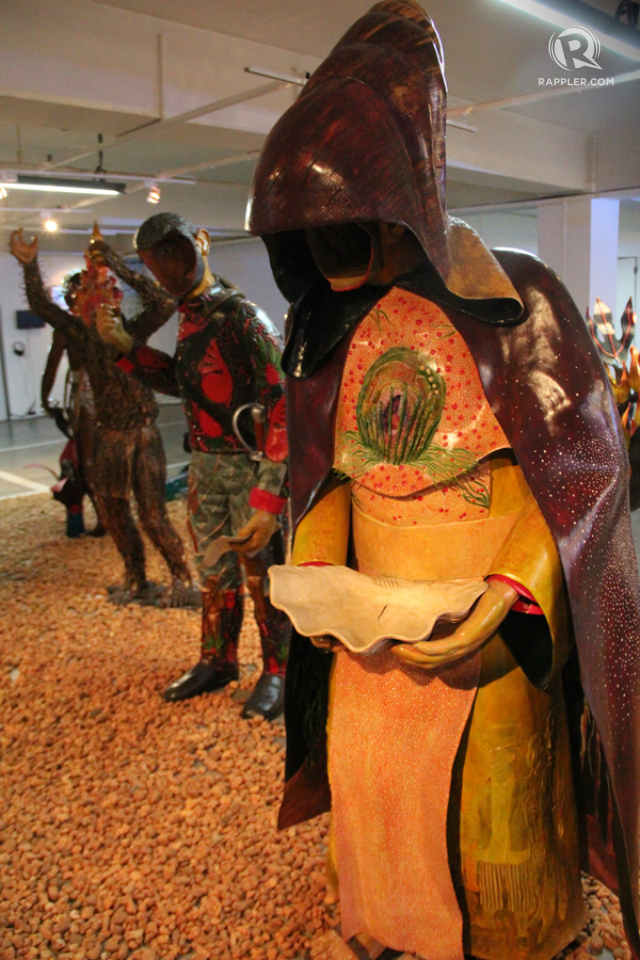 Adding a touch of immediate relevance, Alwin Reamillo, participating in Tin-Aw Art Gallery’s themed exhibit of canned goods by various artists entitled Manufacturer’s Advice: Content May Vary, crafted 44 cans actually made of bamboo segments, each one labeled with a picture of a member of the Special Action Force of the Philippine National Police (SAF-PNP) who were recently killed in a violent clash in Maguindanao. 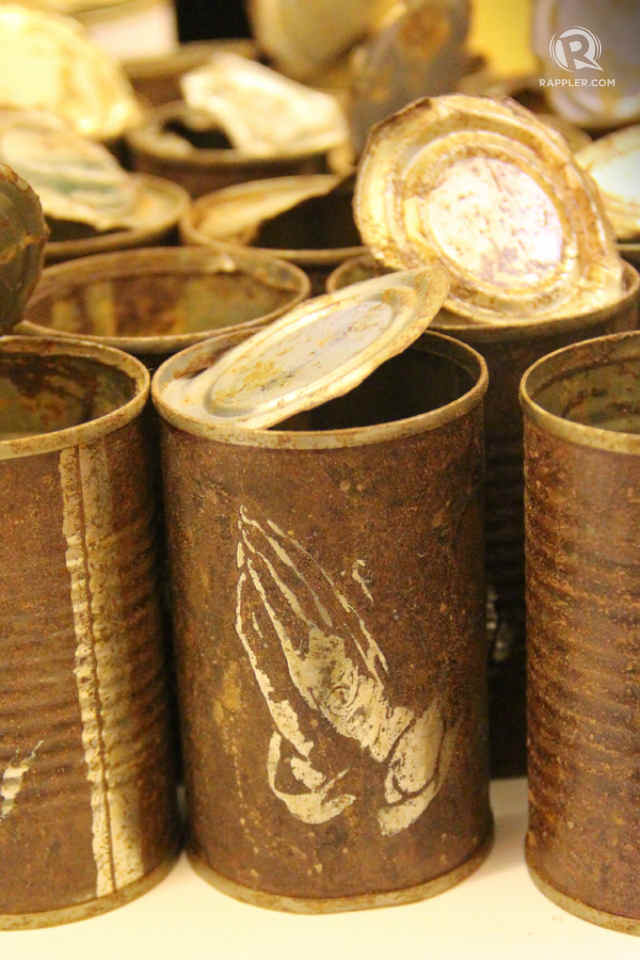 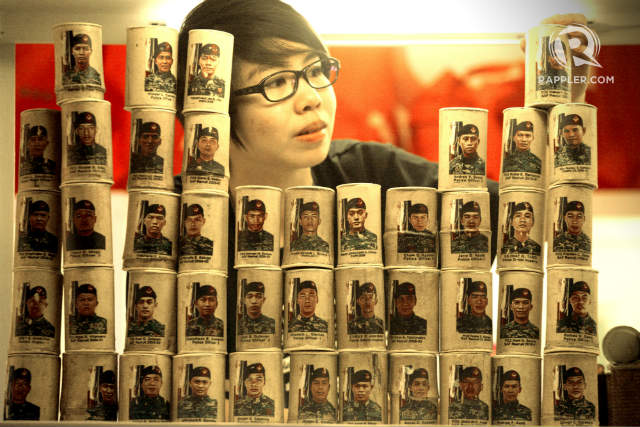 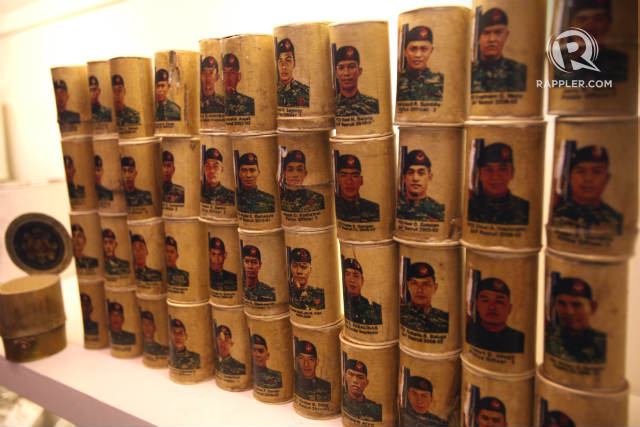 The entire exhibit itself, set up like a supermarket display, was a commentary on the commodification of art.

Going even further was CANVAS – Center for Arts, New Ventures And Sustainable development—a non-profit organization that has been successfully publishing books for children, often illustrated by renowned artists, thanks to proceeds from art.

Not only do their artworks speak loudly of their advocacy; so does where their money goes to. Besides producing excellent books for children, their exhibit, entitled Libro: A Collection of Visual Narratives contains many acclaimed artists, from National Artist Benedicto Cabrera (Bencab) to the aforementioned Jaylo once again, to the whimsical Dan Tayona and his trademark plump figures, all adhering to the theme of reading.

The most thought-provoking yet subtle conceptual works were ones that attempted to spark conversations on the role and nature of exhibits and art itself. These include special exhibits by the likes of Maria Taniguchi and Geraldine Javier.

But by far the most arresting special exhibit was Annie Cabigting’s oil on canvas/installation entitled MOMA, Black, White, Presence and Absence. Recreating one of New York’s Museum of Modern Art trademark benches in the middle of of her exhibit space, then painting photo realistic images of that very same bench in various circumstances all in the same museum setting, it makes any viewer who looks at the painting become part of the exhibit itself. To other people viewing the entire affair, they’ll see a scene within a scene. 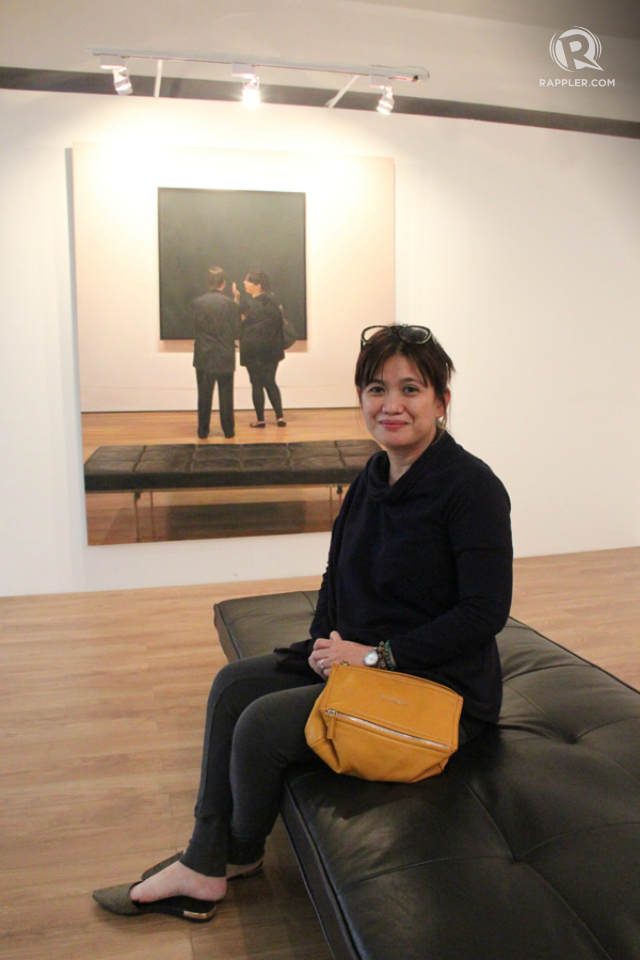 Will the imagery of these skulls get buried by 2016 or will they arise once again to haunt next year’s Art Fair? Not even the dead can augur. What matters is that Philippine Art is alive and kicking, thanks in no small part to the Art Fair. – Rappler.com