IN PHOTOS: 6-course meal at The Tasting Room, City of Dreams Manila MANILA, PHILIPPINES – Many perceive fine dining to be a self-absorbed activity. The Tasting Room, the local adaptation of the Michelin-starred restaurant in Macau, seeks to change this impression. (READ: What you’ll see at the City of Dreams Manila)

Chef de cuisine William Mahi, a 33-year old wunderkind from the Basque coast in France, has worked with the likes of Joël Robuchon, Alain Ducasse, and Christian Têtedoie. Spondi, a kitchen in Athens that he headed in 2013-2014, has garnered coveted stars from the Michelin Guide. Now, Mahi says, “In a decade, Manila will be one of the key culinary [cities] in the region.” He works closely with seasoned sommelier-turned-restaurant manager Damien Planchenault.

Opulent golden hues color the compact space – painting The Tasting Room with posh vibes. But it’s not as intimidating as it seems for the 136 patrons it can seat for dinner. The restaurant has a casual approach to their highbrow grub: you can make your dinner as personalized as possible. (RELATED: Quick look: The buffet at The Café, Hyatt City of Dreams Manila) 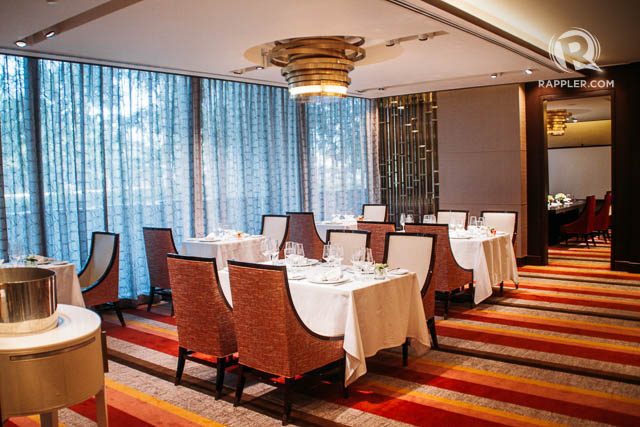 You can book a dinner at one of two private rooms with a huge flat screen TV on the other end, giving you an Orwellian gaze into the kitchen. Chef William kids that if you wave at the kitchen staff on screen, they would wave back, too. The degustation menus take the limelight at the restaurant, so expect the portions to be small. But Monsieur Planchenault tells us that there still are times that guests still look for bigger servings. He says, “It’s not because you are eating more, then you will be happy at the end,” because the menus must be as strategic as they are sensory.

On the written menu, dashes separate the ingredients. This is because the kitchen takes a deconstructive approach to gastronomy. The method enables you to appreciate the chemistry among the components and of the whole dish. This is almost like cold science, but the staff will warmly accommodate you, giving indispensable advice and answering your queries.

The Tasting Room also boasts of a formidable cellar of wines and whiskies to pair with their gastronomic offerings – including some exclusive vintages that may burn a hole through your wallet, by the bottle or by the glass. The 2008 Pessac-Léognan from Clarendelle (P900 per glass) was one of the prime vinos poured at the tasting event we recently attended. Here’s a look at the set we tried – a menu dubbed “Chef William’s Mood (P3,600), curated and designed by the chef de cuisine himself. Three exceptional hors d’oeuvres are laid out – a preview into Chef William’s method.

Caramel coats a cube of goat cheese, but it’s apparently pulverized bits of Parma ham. Dark chocolate-covered foie gras lollipops, filled with apple compote, play like a symphony in the mouth with its unlikely but clever interaction of flavors. To close this teaser, take a spoon of limoncello jelly to cleanse the palate with its crisp, refreshing citrus.

Breads are also served on the side with two types of butter: an earthy truffle and a briny nori. For all its share of controversy, foie gras is still quintessential European fare.

A log coated in red wine jelly and laced with spices sits like a shiny burgundy Tootsie Roll on your plate. It tempts to be smothered in port wine reduction and strawberry sauce. Confetti is scattered liberally on the plate. Take a bite of each to tame the intense terrine: dried figs, fig chutney, strawberry macarons, strawberry marshmallow, lychee jelly, and raspberry powder. Honey crisps, green apple chips, and pain d’épices (spice bread) lend a crunchy contrast.

Experiment. See how the different flavor profiles mix with the foie gras. An egg yolk is poached sous vide for an hour in olive oil, until it reaches 52 degrees. This crowns a velvety potato mousse topped with slices of Iberico ham and porcini.

Break the yolk and scoop bacon and caramelized onion underneath; umami explodes. The sculptural and colorful Norwegian salmon is also a figure of designed taste as flavors culled from the waters meet with those from the earth.

The salmon is house-smoked with Parisian sauce, a reduction made from a mixture of herbs and fish stock. On the side, fresh clam is marinated in sake and vinegar. Caper berry, white cream reduction of ginger and shallots, olive oil powder, dill oil, and white button mushroom accompany the tender salmon. Celery foam blankets the salmon, garnished with some salmon and herring caviar. When you chew on the oyster leaves, they remind you of their namesake. To finish, beetroot is shaved into chips, and its peeled skin embellishes the dish like a flower in bloom. After a series of ornate dishes, a seemingly unassuming dish follows. However, the pungent, earthy aroma that it gives off is distinct.

Mushroom cappuccino foam envelops a piece of ravioli, filled with button, morel and porcini fungi. There is a generous sprinkling of cèpe powder.

The earthy Italian dumpling is a logical follow-up to the salmon – a complement to its dominant marine flavors. This main course is served with a bit of pomp. Several cuts of lamb saddle perch on a wreath of smoked rosemary and thyme.

The tender lamb is complemented by macaroni filled with the unmistakable flavors of arugula and spinach. Slices of golden beetroot and turnip accompany the lamb saddle.

The degustation crescendos with the lamb. It has started with an overture of savory appetizers, going through the complex salmon, and ends on a heavy note. By this time, you may already feel full, so the staff might hold the dessert back for a while. A mille feuille made of three layers is served for dessert. The puff pastries sandwiches dollops of dark rum-infused vanilla pastry cream. You cannot miss the rum; it is distinctly smoky.

Homemade vanilla ice cream is scooped on the side, drizzled with salted caramel made with fleur du sel – sea salt commonly hand-harvested from the northwestern French coast. A garnishing of lychee jelly cuts through the spicy rum and vanilla with its fruitiness.

Eat the mille feuille like pie à la mode by spreading the ice cream on the topmost layer. It might feel weird, but it works!

The fledgling Entertainment City by Manila Bay buzzes with excitement as new establishments have cropped up there. Among these, the City of Dreams has been trying to position itself as a destination with its appealing lineup of restaurants. And in the bigger scheme, it might be charted as a premier spot for food connoiseurs across the metro, the country, and perhaps, the world. Undoubtedly, The Tasting Room can be a frontrunner.

The Tasting Room is located at G/F Crown Towers, City of Dreams Manila, Roxas Boulevard, Parañaque City. It serves dinner daily from 6:00 to 11:00 p.m. Contact restaurant manager Damien Planchenault and his staff for inquiries and reservations at 691 7789.