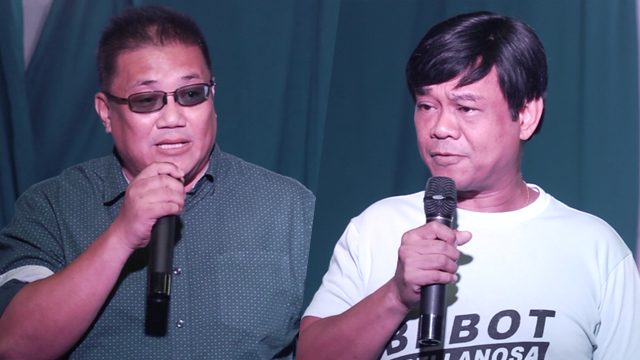 The key issues for the 2016 elections were chosen by the Ateneo School of Government’s (ASOG).

“We can transform polls as an accountability mechanism if we have spaces for discussion, if we are informed of candidates’ platforms and stances on the issues,” Aceron said.

Aside from ASOG’s issues, the candidates were also asked about their views on local issues crowdsourced by Cebu youth, including curbing HIV, environmental issues, and anti-discrimination against LGBTs.

“As a member of the Committee on Appropriations, and a principal sponsor of the country’s annual General Appropriations Act, I make sure Cebu doesn’t get left behind,” said reelectionlist Abellanosa.

He said he had made scholarships and education available even in the city’s far-flung barangays during his term. A report from the Ombudsman-Visayas in February, however, said that Abellanosa sas guilty of grave misconduct over his previous involvement in the city government’s scholarship program, and ordered him dismissed from public service.

On agriculture and fisheries, Abellanosa admits the Philippines is not as competitive as neighboring countries because it’s behind in terms of technology.

“We need reforms in the National Food Authority, the Department of Agrarian Reform, and other agencies to boost our agriculture. Bills have already been filed in both houses of Congress,” he added.

“4Ps is being abused by local officials. Citizens threatened to be taken out of the lists if they don’t vote for their local candidates. That should not be the case because it is a social not a political program,” he added.

The audience did not have a chance to ask questions to the embattled lawmaker since he said he had to leave due to a prior commitment with farmers.

Lawyer Gerry Carillo, running under the United Nationalist Alliance (UNA), started his presentation with his past achievements in social services.

“In my 4 years as Cebu City councilor, I passed ordinances for the urban poor, senior citizens, and children. I made sure they are the priority,” Carillo said.

If he wins the congressional seat, he said he will make Cebu City greener.

“We need to burn less carbon. If we promote bike and pedestrian lanes, we will use less gas and we will be healthier. We also need to restore our rivers,” Carillo said, adding that he is already pushing for bike lanes through an ordinance.

An audience member asked Carillo how he plans to curb the HIV epidemic in Cebu. He answered that the city council, which he is part of,  already passed local ordinances to improve the city’s Local AIDS Council. (READ: Cebu to presidential bets: What will do about HIV epidemic?)

“We have a lot of things to do to curb HIV. We need to reach out to barangays and inform them about the disease. Education has to be maximized so people can really understand HIV,” he added.

North Cebu: How to fix traffic

Former Cebu City mayor Alvin Garcia, running under UNA, said there is a need to amend current legislation to improve on the issues raised at the forum.

He added that the government’s 4Ps program should be made more sustainable.

“I have nothing against 4Ps but there needs to be a limit to government dole outs so families become sustainable. They can’t rely on government help forever,” Garcia said.

The former mayor invited the youth to study current laws and suggest amendments to him to solve social issues.

Garcia is running against veteran legislator Raul del Mar of BOPK, who has represented the district for 7 terms. Del Mar also served as House deputy speaker for 6 years. Del Mar focused on his past achievements. He said he has done a lot to help farmers and fisherfolk.

“We need to support farmers with farm-to-market roads. Through my legislation, I’ve implemented [use of] buses from far-flung barangays to the city so they can have access. We have provided loan services and irrigation projects to farmers,” Del Mar said.

He added: “On fisheries, we’re looking for regulatory functions. We need to penalize illegal fishing and provide livelihood training on seafood.”

The main question from the audience was about fixing the city’s worsening traffic.

Garcia admitted that he has yet to study the laws concerning both issues but again invited the audience to suggest improvements to legislation.

Del Mar gave a more concrete answer. He said the city’s mass transport system needs to be fixed and more roads need to be built.

“Transportation should be in line with road expansion. The number of cars in Cebu City increased by 200% since the 1992. I say we need a subway system,” Del Mar said.

Del Mar said he supported the proposed Bus Rapid Transit System (BRT), which is on its final stage. He has also been a staunch supporter of a subway to be built in Cebu.

“The Department of Public Works and Highways (DPWH) is in favor of my proposed subway. We’re still getting approval the approval of the Department of Transportation and Communications (DOTC),” he added.

Questions about anti-discrimination against LGBTs were also asked. Both candidates said they support the cause and will review existing laws.

The local debate happens a day before the second presidential debate in Cebu City. According to Aceron, local debates are equally important.

“The reason we’re not progressing is because we’re not empowering local government officials. We hope to turn the elections into a platform and issue based one,” she said.

Aside from ASOG, the forum is organized by the National Youth Commission, and the First Time Voters Network, a youth organization in Cebu.  – Rappler.com